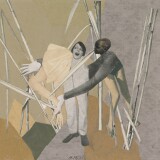 Born 1889. Died 1979.
Interested in selling a work by Hannah Höch?
Request an Estimate

Works by Hannah Höch at Sotheby's

While most women associated with the Dada movement were relegated to either the etherial role of muse or the more mundane role of model, Hannah Höch stands as an artist in her own right. By deftly wielding the incisive power of the photomontage, Höch worked to disassemble the false dichotomies of gender that prevailed in her avant-garde coterie and society at large.

Anna Therese Johanne Höch was born on 1 November 1889 in Gotha, Germany. In 1912, she began classes at the School of Applied Arts in Berlin, choosing a curriculum in glass design and graphic arts, rather than fine arts, to please her father. In 1915, she began a relationship with Raoul Hausmann, a member of the Berlin Dada movement, with whom she would pioneer the practice of photomontage. Meanwhile, she earned an independent livelihood in the handicrafts department of Ullstein Verlag, designing embroidery and lace designs for ladies. She exhibited with the Berlin Dada group in the seminal First International Dada Fair, over many members’ objections. Prominently displayed in the fair was her densely-frenetic photomontage Cut with the Dada Kitchen Knife through the Last Weimar Beer-Belly Cultural Epoch in Germany, in which she sharply satirized the postwar “democracy without democrats” and the bungling chauvinists that brought it about. In 1929, Höch mounted a solo show was at Kunstzaal De Bron in The Hague; at the time, she was enmeshed in a romantic relationship with the Dutch writer and linguist Mathilda Brugman. By the early 1930s, Höch came under close scrutiny by the Nazis, who were offended by numerous dimensions of her artistic practice. In 1932, her scheduled show at the Bauhaus was canceled, and Höch was forced to keep a low profile. Throughout the war, the artist lived in the outskirts of Berlin. However, at war’s end, she resumed making and exhibiting her works internationally until her death on 31 May 1978, in Berlin. In 1997, an extensive collection of her photomontages traveled between the Walker Art Center in Minneapolis, the Museum of Modern Art in New York and the Los Angeles County Museum.

Today, you can find Höch’s work in the collections of the Brooklyn Museum, the National Galleries of Scotland in Edinburgh and the Kunsthaus Zürich, among many other important world museums.