W u Guanzhong famously wandered far and wide throughout his life to seek inspiration for his art. Even in the 1970s when resources were extremely scarce, this wanderlust was so strong that he used all means possible to see the great landscapes and natural beauty of China, discovering remote villages unknown to most. From majestic lakes and snowy mountains to modest flowers and trees, nature provided more than subject material for paintings; they were a spiritual pillar. The artist drew immense creative energy from nature, and yet real inspiration was uncommon, as the artist expressed in his own words.

“For my landscape paintings, I have traveled to many places. While great travel destinations are many, subjects for painting are few.”

Having heard of the mesmerizing beauty of two natural wonders, both named "Heavenly Lake," Wu Guanzhong set out on foot for Xinjiang and Jilin in the 1980's to experience the splendor of the landscape himself. While the two lakes share the same name, they differ in environments and aura. The one in Xinjiang, along with its mountainscape, glows with vivid and vibrant colors. In contrast, the emerald-hued surface of the Heavenly Lake of Mount Changbai stands out from the monochromatic volcanic landscape.

Located 2,000 meters above sea level, Mount Changbai is a volcano with a deep caldera. The lake, also named Tianchi or Heavenly Lake spans across the Chinese-North Korean border. Wu Guanzhong seldom painted the scenery of northeastern China. During a sketching trip to Mount Changbai in the summer of 1985, the artist was mesmerized by the clear and large blue-green volcanic lake at the very peak of the mountains. Reflecting a clear sky, the water appeared so blue and so still that it shone like a large piece of jade. Yet he found the surrounding yellow and grey volcanic rocks unpleasing. When Wu Guanzhong arrived at the caldera, he observed with some disappointment that the igneous rocks were in dull hues of ocher, yellow, gray and black, covered by pale grass in thin patches.

"The emerald green surface of the lake does not go well with the depressing colors of the rocks, the scenery is thus not aesthetically pleasing with the lack of luminance and poor color harmony. However, if the emerald is embedded in the midst of white, it will be my ideal heavenly lake!"

Mount Changbai was known for its perpetually boundless white. When it snows, the slender trees and the running hills will all be covered in white. Such monotone emphasizes Mount Changbai’s undulating nature to present the most refined pure aesthetics. I have to come again when it snows!

A year after he visited Mount Changbai, Wu Guanzhong created his own version of the perfect Heavenly Lake on paper. He situated the large teal-green lake at the center of the painting, capturing it with thick strokes of blue, which is rarely seen in the artist’s works. He transformed the surrounding mountain range into a wintery snowscape. The large canvas, spanning more than 1.8m, offers a panoramic view of arctic minimalism and makes use of the texture of the Xuan paper to portray the smooth and clean snowy landscape. The artist's rhythmic lines and gray washes delineate the silhouettes of the surrounding mountains, and a scattering of colorful dots portray the sparse shrubs, breaking the monochromatic austerity of the white snow. The stark contrast amplifies the color of the water, thus setting a scene of perfect tranquility and ambiance that can be called heavenly. Within the known works of Wu Guanzhong, there is only this one panoramic depiction of Mount Changbai created by the artist.

In the summer of 1981, Wu Guanzhong and accompanying students of the Central Art Academy explored Xinjiang. During these excursions, he painted 33 sketches of the unique scenery and collected these in his sketchbook, “Travel to Xinjiang.” The Heavenly Lake was one of Wu’s favorite subjects, appearing four times, including in the work Heavenly Lake in Xinjiang. This work was selected by the artist to be exhibited in his first large-scale traveling exhibition in western countries in 1989.

"Hidden in a pine forest, Xinjiang’s heavenly lake is embraced by snowy hills. With the gently rippling water, frosty snow, and the bushy trees, it’s no wonder the Chinese also named Heavenly Lake as the 'Jade Pond,' where the Chinese goddess Queen Mother of the West bathes."

Wu Guanzhong's composition of the Heavenly Lake comes alive as vivid blues, purples and greens capture the lushness of surrounding pine forests amid snowy mountains. If not for the snowy mountain in the back and the yurt in the foreground, the vast expanse of sky, water, and forest would almost blend together in the viewer's gaze. Such lavish use of bright, vibrant colors is very unusual in Wu Guanzhong's sketches. We can imagine how keen the artist had been to evoke the same intensity that he was experiencing in real life. Four years later, the artist created Jade Pond based on this sketch, yet the style had already become quite different to what we see in this sketch.

The Artist's Relationship with Nature

Wu Guanzhong's inspiration came not only from nature on a grand scale, but also from picturesque villages and the small delicate blooms and trees that flourish on majestic mountains, within deep forests, and by the water. Each of these paintings reveals just one of the many facets of artist sought insights from nature. This article is the first in a four-part series on the Wu Guanzhong's relationship with nature. Read more about the artist by clicking on the link below or explore the many Wu Guanzhong works at the upcoming Fine Chinese Paintings sale (10 July, Hong Kong). 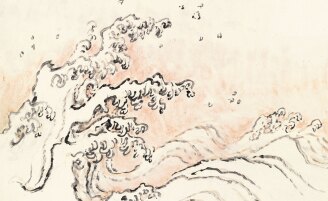