Time Capsules of Past Times: A History of the Portrait Miniature

Ahead of Sotheby's sale, Old Masters including Portrait Miniatures from the Pohl-Ströher Collection, opening 23 April, Director and Specialist Mark Griffith-Jones discusses the compelling history of the miniature portraits that feature.

The first portrait miniatures date to the early sixteenth century. They emerged out of the illuminated manuscript tradition and the earlier artists painted with watercolour on thin vellum supports, which were invariably stuck down onto pieces of playing card.

Throughout the Medieval and Renaissance periods, portraits of rulers or wealthy patrons had been incorporated in precious books or official documents, but it was Jean Clouet (1480-1541), a French artist working at the court of Francois I, who is credited with liberating these likenesses and presenting them as free-standing, framed, works of art.

The phenomenon soon travelled to England, where Henry VIII and his immediate successors took to presenting favoured courtiers with intimate portraits of themselves. These works were often housed in jewelled lockets, frames or boxes, which were to be either worn or kept in private closets or cabinets, along with other precious objects.

Sitters were placed against flat blue backgrounds and artist such as Nicholas Hilliard (1547-1619) mastered techniques that enabled him to use gold, burnished silver and resin to describe magnificent jewellery and the elaborate costumes of the day.

As the century drew to a close, artists, began receiving commissions, not only from the monarch, but also directly from members of the court, the gentry and the wealthy urban elite.

Although the portrait miniature had originated and evolved in France, it was in England that the tradition flourished, and the seventeenth century witnessed a great flowering of talent there.

Artists broke ties with many of the pictorial conventions of the previous generation. Rather than looking to manuscript painting, they took inspiration from the general developments in large-scale oil painting, and from artists such as Sir Anthony van Dyck. His psychological directness and lively brushwork were mirrored by miniature painters and even, according to some accounts of the work of Samuel Cooper (1609-1672), surpassed.

Painters continued to work predominantly with watercolour and bodycolour on vellum, although new techniques also came to the fore; some artists specialized in small-scale oil paintings on metal ground while others perfected the medium of plumbago (back-lead chalk) on vellum. This period also saw the development of painting in enamel, which had evolved in the goldsmith's workshops of Blois and Paris but came to London with Jean Petitot (1607-1691) and his followers.

Over the course of the century the average size of a portrait miniature increased. They were set in precious metal frames - some jewelled and enamelled - as well as frames of gilt-metal and wood. They remained portable, private images that were designed, if not to be worn, then at least to be kept close at hand.

The beginning of the eighteenth century saw one of the most important technical innovations in the history of portrait miniature painting: the gradual replacement of vellum, as the artist's chosen support, by ivory. This systemic shift is credited to the Venetian painter Rosalba Carriera (1675-1758).

Painting on ivory presented its challenges, as the watercolour pigments were harder to control on the non-absorbent surface, but the luminous, translucent qualities of this combination of media enhanced the portraits to such a degree that its popularity spread rapidly across Europe.

Although not all countries took to the new ground immediately - in France vellum remained the preferred ground until after 1750 - the last decades of the century were a golden age of miniature painting for all the leading national schools. The period is further enriched by the activities of enamel painters, as well as those who specialized in painting on porcelain.

The eighteenth century also marked a widening of patronage, far beyond the confines of previous times. Works were commissioned by a diverse spectrum of society, including the professional classes, soldiers and in the case of the British, members of the East India Company. These patrons continued to view the works as highly personal objects. They housed them in beautiful frames, composed of varying combinations of gold, enamel, glass and pearl. Many frames also contained a lock of the sitter's hair in a compartment on the reverse. These precious objects were largely intended to be worn or carried about but were also occasionally set into the lids of snuffboxes.

Soon after the dawn of the new century, fashions and tastes began to change throughout Europe. The need for portability reduced as the wearing of portrait miniatures fell from favour. Since the sixteenth century, the majority of miniatures, had been either oval or circular in shape, however now many began to be painted on much larger rectangular sheets of ivory, which could be framed and hung on the wall.

Portrait miniature painters were inspired by the highly polished naturalism of the leading oil painters, such as Sir Thomas Lawrence (1769-1830) and they refined their technique so that they could recreate the chromatic depth and the surface gloss of large-scale oil paintings.

Miniatures of this type continued to be in high demand both amongst the aristocracy and the wider public. However, the invention of photography in 1839 threatened the portrait miniaturist's existence and by the end of the century, the flame of this 400 years old tradition had been all but extinguished. 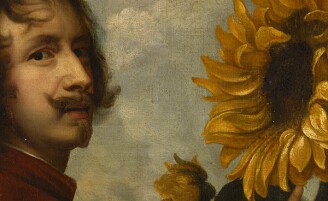