By Sotheby's
Sayed Haider Raza, a founding member of the Progressive Artists’ Group, was one of the fathers of Indian Modernism. His celebrated career spanned more than seven decades and his creative output during this time was as varied as it was immense. As several works by Raza are offered in the Modern and Contemporary South Asian Art sale, we take a look at three of his most distinctive.

B etween 1939 and 1943, Raza studied at the Nagpur School of Art. In the mid-1940s, he moved to Bombay, where he studied at the Sir J.J. School of Art and painted mostly with watercolours and gouaches, the preferred medium of art schools at the time. His subjects were landscape and street scenes captured in a variety of moods and defined by a shifting interplay of light and colour.

In 1950, Raza left India on a government scholarship to Paris. There, he became a member of the Académie des Beaux-Arts and was exposed to the Post-Impressionist artists, in particular Paul Cézanne and Vincent Van Gogh. Raza admired how such artists used colour to structure their paintings, something which greatly influenced his own artistic production. In 1962, Raza moved to America to teach at Berkeley, University of California. During this period he witnessed for the first time the Abstract Expressionism employed by Sam Francis, Mark Rothko and Jackson Pollock.

Equipped with this inspiration from the western modernists and Abstract Expressionists, Raza’s work became increasingly abstracted. Whilst his style retained the gestural brushwork seen in his early paintings, he was no longer under the constraints of realism. In the 1980s, his loose brushstrokes began to be replaced by a more rigid and formal geometry, one borne from the precepts of Hindu and Buddhist philosophy.

‘… [Raza] found himself moved by the Indian scene so full of sunshine and colorful costume, so crammed with the interest of old architecture. In the brilliance and special quality of the sunlight of Central India he found peculiar delight – it pervades his pictures’.

This study in watercolour and gouache is an archetypal example of Raza’s earliest works and provides a rare glimpse into the beginnings of his artistic practice. His gestural brushwork and bright colour palette create an attractive street scene, humming with life.

“…the most perfect orchestration of colour and form is insufficient if the painting is not invested by profound feeling. This is possible only in an elevated state of direct perception - manasa pratyakshata. How this miracle happens, how this state of mind is achieved, how one feels – not even the artist knows. However, the best of poetry, the finest music, the most significant art takes place in this ‘état de grace’.”

Here, Raza depicts a beautiful Indian landscape ablaze in rich yellows and reds, in a composition reminiscent of American colour field painting. Western abstractionists may have influenced Raza, but the use of colours this vibrant and passionate was entirely his own. The Devanagari script inscribed on the canvas reads the Hindi word aaj, meaning 'today'. This work proudly announces exactly that: today, a spirit of freshness, the new, a truly Indian abstraction, and a vital force for advancing history.

‘For all the tragic intensity of its smouldering fires, and the flare of its greenery, the world of Raza hangs in a torrent of possibilities, amid the contending powers of darkness and light. Notwithstanding the storms of life, the artist, true to himself, has acquired the gift of serenity; he has achieved the inexpressible plenitude which, in the Arabian poem, is born of the reiterated syllable signifying Night.’

In the 1970s and 1980s, Raza was increasingly drawn, both emotionally and philosophically, toward his native land. He began a series of paintings titled La Terre or ‘The Earth’, of which this is one of the finest examples. Raza is able to capture the delirium of the dark and dense Madhya Pradesh forests which he experienced as a child, through his bold use of colour. Fiery earthy tones are enveloped within the impending darkness, and through the energetic lines and fluid shapes which flit across the canvas, Raza depicts the rhythms of nature.

La Terre is a tour de force – a testament to Raza’s intellectual aptitude and artistic brilliance, imparting his complex and theoretical thoughts into a masterpiece of great beauty and fluidity. 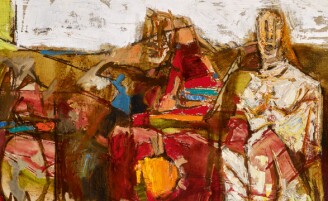