By Sotheby's
Curated by Okwui Enwezor and Chika Okeke-Agulu, with the assistance of Damian Lentini, curator at Haus der Kunst, El Anatsui: Triumphant Scale is the largest survey exhibition of the artist’s 50-year career to date. Here, Dr Lentini discusses the importance of the African artist.

E l Anatsui: Triumphant Scale is the biggest solo exhibition of an artist from the African continent, but this exhibition does not frame him as a contemporary African artist, but rather a contemporary global artist. Not only is he one of the most important African artists, he is also one of the most important living contemporary artists working today. Although his works were seen in Venice in 2007 and more recently at the Palazzo Fortuny, this exhibition shows that audiences have only scratched the surface so far.

The starting point of the exhibition is Man’s Cloth, the first work that El Anatsui ever did using bottlecaps. This work was first shown in 2001 at the October Gallery in London, then promptly bought by the British Museum. It's a deliberate red herring that the exhibition begins with three major works, designed to have people assume they have seen the highlights of the show and then prove that they couldn’t be more wrong. 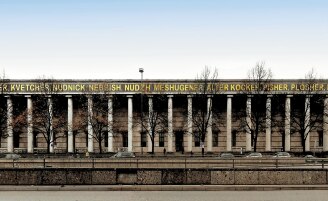 One of the first works aquired by a major museum collector of contemporary art – the Centre Pompidou – was Sasa, from 2004. It was part of a phenomenally important exhibition called ‘Africa Remix’ that toured around Europe. This was one of the early moments where El Anatsui’s work, as well as work by several other artists from the African continent, was exhibited as important global contemporary art.

El Anatsui’s works are never complacent when he finishes them. They change incredibly with every hand and every installation and not just because of their relationship with the space. When the work The Beginning and The End was shown at the Palazzo Fortuny in Venice, it was hung in a dark room and almost looked like theatre curtains from a distance. It begins with circular elements which impart an organic quality to the work, but dissipates towards the end. El Anatsui has said that he likes the idea that we have an ‘organic beginning and we have something that looks almost like an urban grid at the end’.

Black Block is in the collection of the Brooklyn museum of New York. When you approach this monochrome work, all these colours, plays of light and emphasis on light open themselves up in the work. It went from something that had a sense of gravity, and was actually quite heavy when it was hanging on the wall to something that looks like it’s floating, like a wonderful suspended moment. This is wonderful work because it shows the real variety of these metal elements. It is not just about cutting things up and combining them together. It is about bringing together the different shapes and colour combinations.

El Anatsui was interviewed by the Haus der Kunst magazine, and the journalist said: “You have been working with metal for almost twenty years now, have you ever reached a point where you think, 'I’ve done it all' - you know, the novelty has worn off, it’s done?”. He laughed and said to the journalist: “You are very funny. When someone speaks to a painter, do you ask them about their long use of oils and various colours on the palette? Do you think you are done?”.

This is how he thinks regarding his metal elements. These are not ready-mades and are not talked about in terms of recycling. It is about using what is at hand and the artist certainly has used these metal elements to play with form, colour, tone and contrast in ways that a painter would.

Rising Sea is a site-specific work that El Anatsui created for Haus der Kunst, it encapsulates everything about the exhibition. Someone said “It’s Fredrich, it is The Monk by the Sea, it is the sublime!”, referring to Caspar David Friedrich's solitary figure, looking at immensity of the universe. It is perfectly tailored to the space and measures 14 metres wide and 8 metres high. It is a work which, from a distance, resembles a monochromatic wall, but once you approach, it opens itself up in terms of details and space. One gets the sense of rising sea levels, rising temperatures – it poses lingering questions of environmental concerns.

This work is impossible to photograph, even by a professional photographer. It's one that you really have to see. El Anatsui’s work is something that you have to experience.