L ola Ogunnaike is an award-winning Nigerian-American journalist whose work has appeared in the New York Times, GQ, Architectural Digest and Rolling Stone. Over the course of her nearly two-decade long career, she’s interviewed a range of newsmakers and luminaries, from Michelle Obama to Kehinde Wiley.

When she’s not writing cover stories for today’s leading publications, Ogunnaike, a former New York Times Arts & Leisure reporter, speaks about the intersection of pop culture and politics as a commentator on CNN and MSNBC. She recently began executive producing and co-hosting Well Suited, a new podcast that takes a deep dive into the minds of contemporary style icons.

I started collecting art during my first trip to Lagos, Nigeria in the late 1990s. A very generous uncle gifted me two extraordinary Bruce Onobrakpeya metal foil reliefs as a welcome gift and I had an immediate and visceral response to their beauty. And so began my love of African art, a love that has only grown exponentially throughout the years. Collecting has now become a mutual passion/obsession that my husband and I share. We seek out works from emerging artists and masters alike and our collection ranges in scope, scale and discipline, from abstracts and collage to photography, sculpture and portraiture. 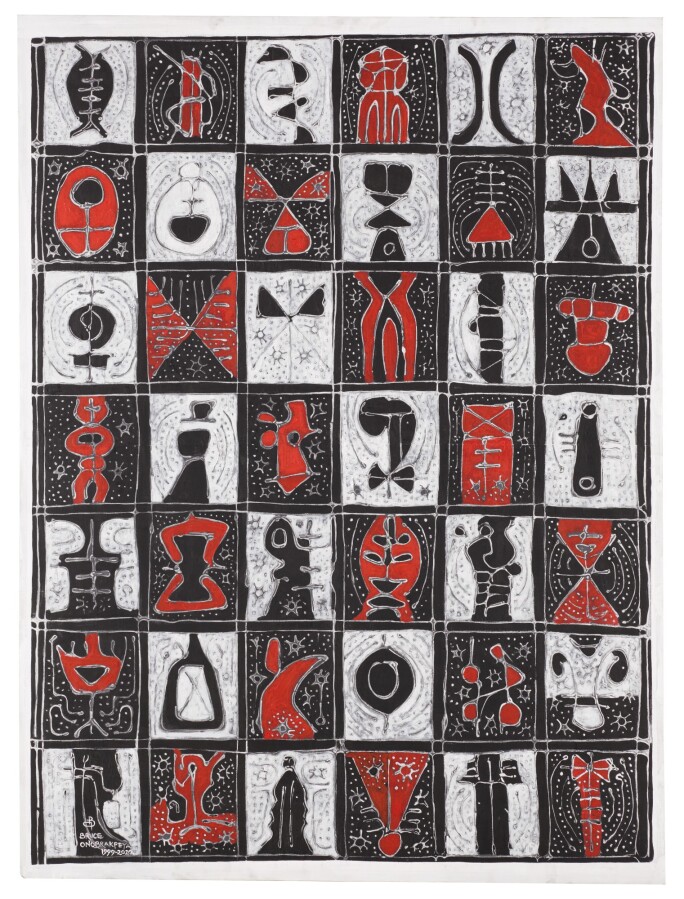 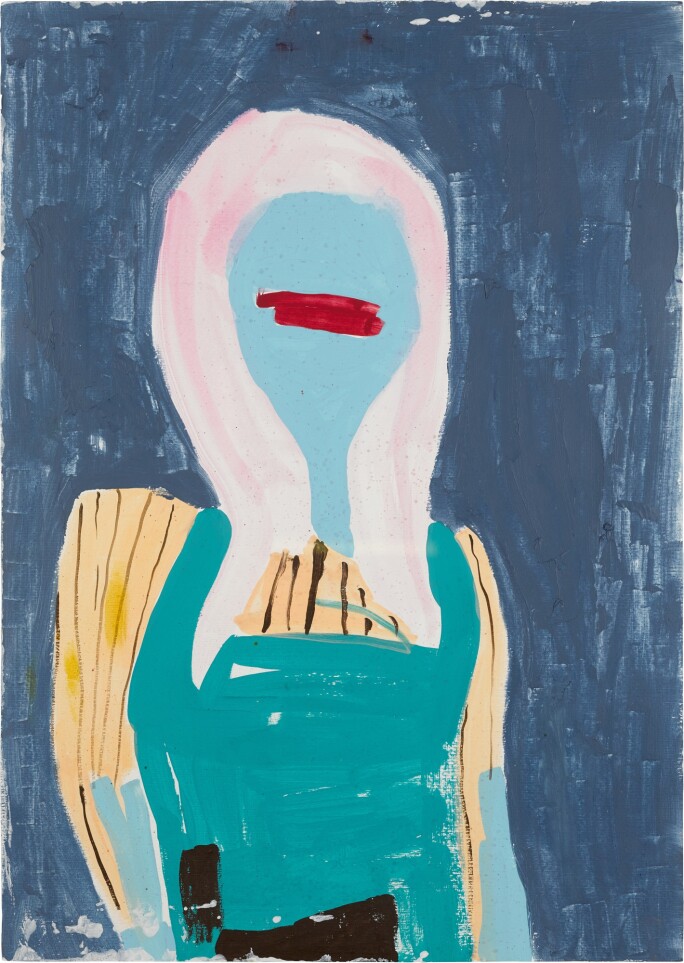 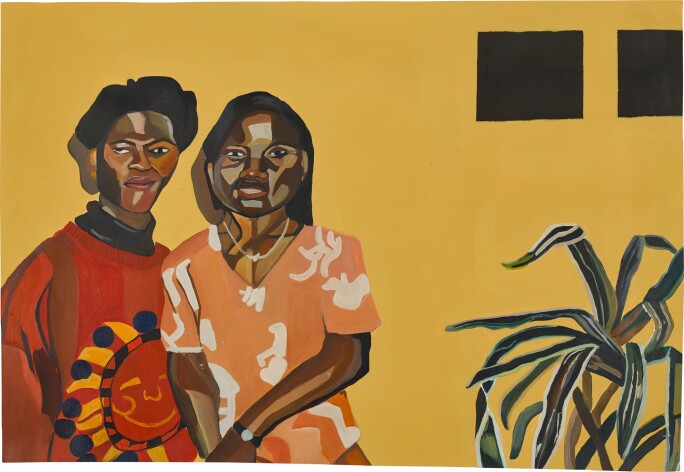 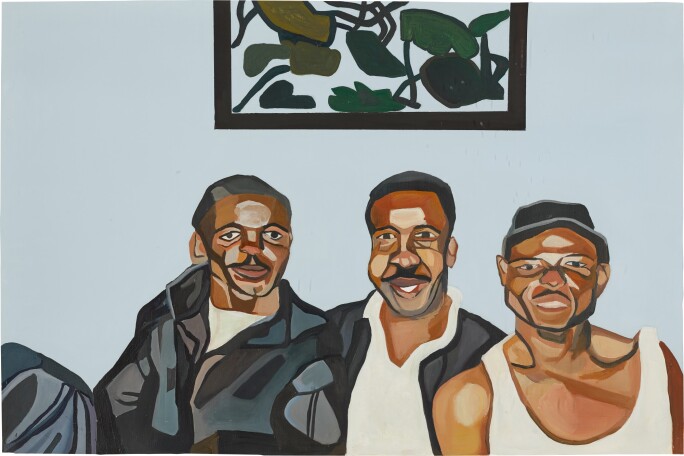 As contemporary African artists enjoy an unprecedented level of visibility and success, it has been wonderful to intimately experience the flourishing art ecosystem in Nigeria. With the ascendance of Afrobeat music, Nollywood (the globe’s second-largest producer of films) and a red hot fashion industry, Lagos, in less than a decade, has fast become one of the world’s most influential and significant artistic capitals. As a result, there is no better time or no better town to collect art.

Galleries are proliferating, young artists are actively building community and loyal followings on social media and homegrown masters are finally being paid the international reverence they’ve long since deserved. African artists, curator Azu Nwagbogu recently pointed out, have also proven that they don’t have to traffic in the four Ds—disease, despair, displacement and destitution—to achieve relevance or critical acclaim. Shackles removed, contemporary artists from the continent are free to have their work engage in dialogues that range from the delightfully mundane to the monumental. I also appreciate that Nigerian artists are largely supported, celebrated and sustained by Nigerian collectors. 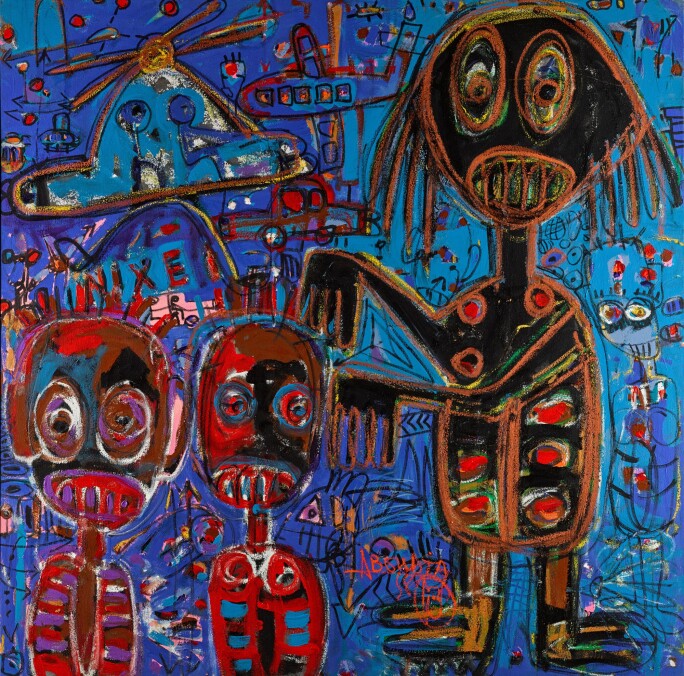 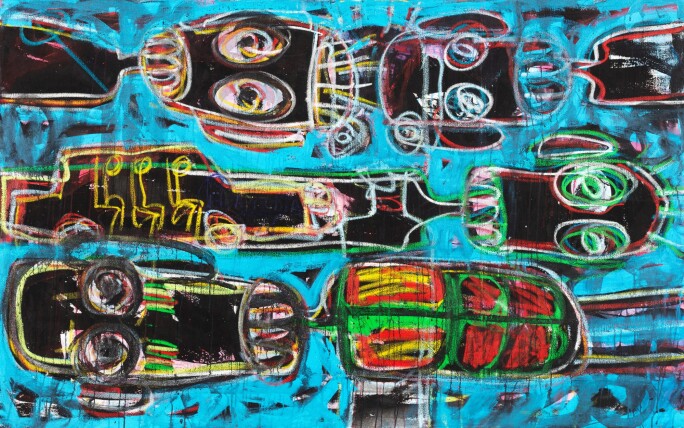 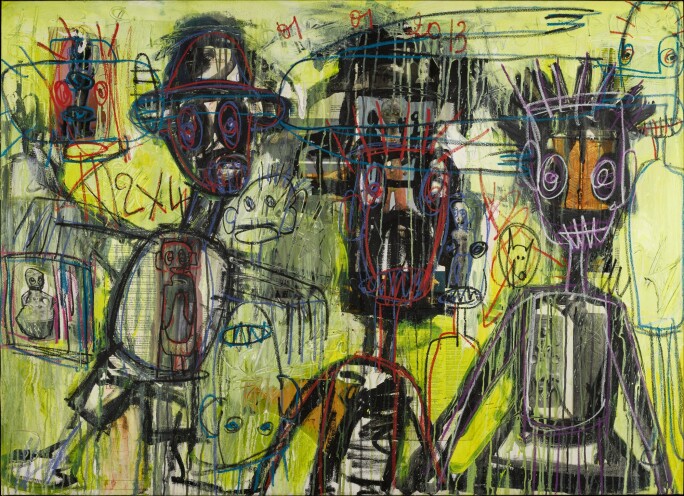 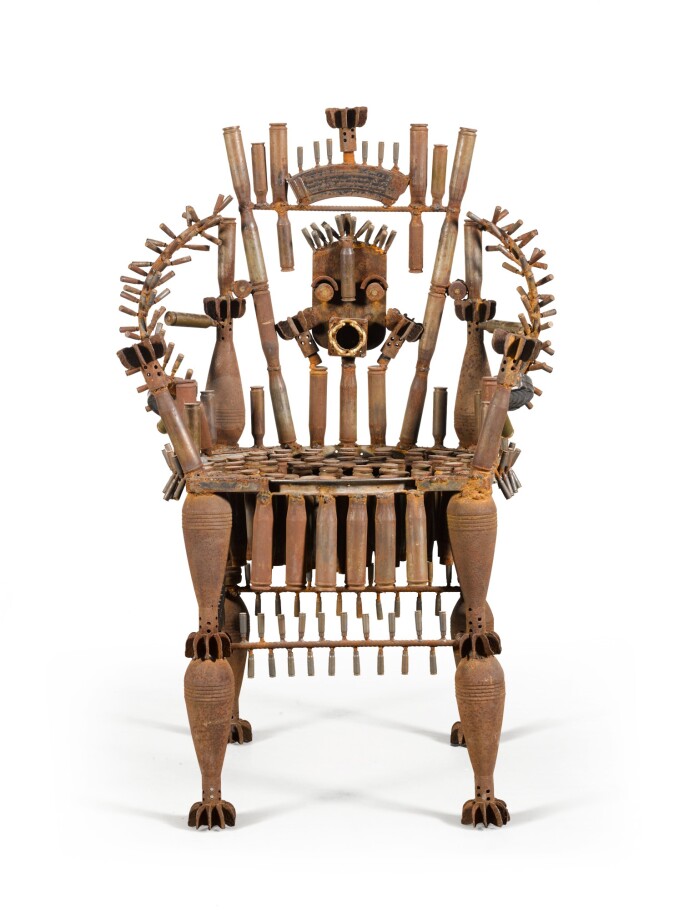 I am thrilled to see that works from female wunderkinds Joy Labinjo, Kudzanai Violet Hwami and Jade Fadojutimi are featured in the auction. Fadojutimi’s Portrait is a quiet and unexpected departure from the frenetic, large-scale paintings for which she has become famous. Hwami’s “Tampon Incision Study 3 (SJW)” immediately reminded me of a jaw-dropping moment from auteur Michaela Coel’s groundbreaking television series “I May Destroy You.” I love that Hwami’s work is overtly political, proudly celebrates the Black body and is unabashedly provocative.

Lagbinjo’s vibrant, heartwarming odes to family are another favorite. Abdoudia’s powerful abstracts are another standout from this auction. Made of welded metal and decommissioned weapons, Goncalo Mabunda’s The Throne of the Negotiator, is the definition of a conversation starter. It’s also the antithesis of subtle. The Mozambique-bred artist is often referred to as an anti-war activist and his painstaking creations are a testament to the metamorphic power of art. 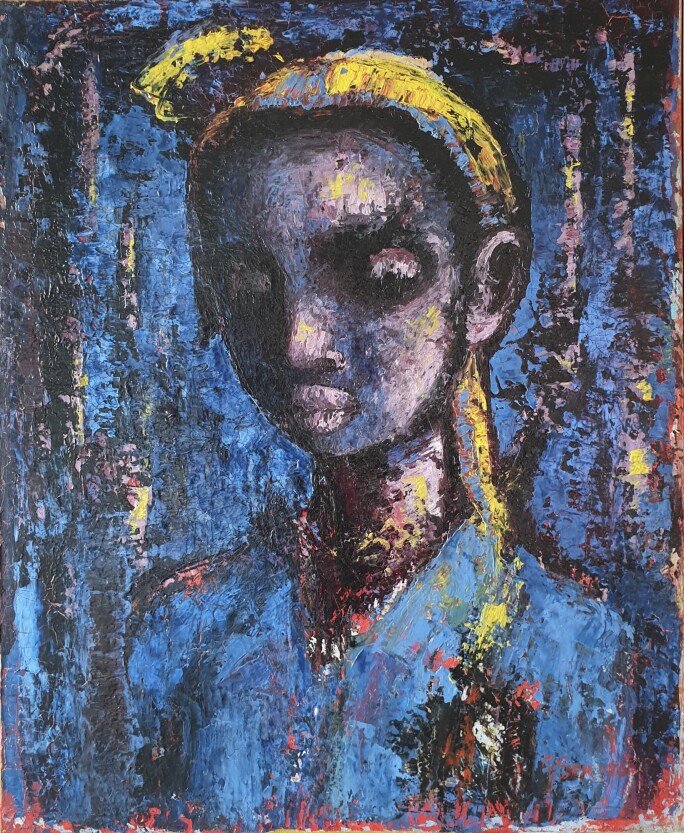 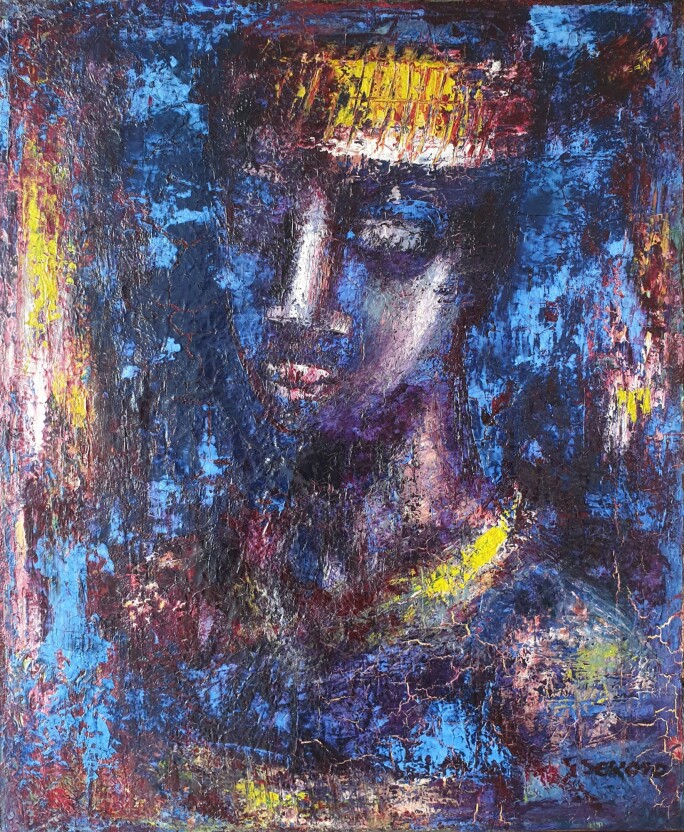 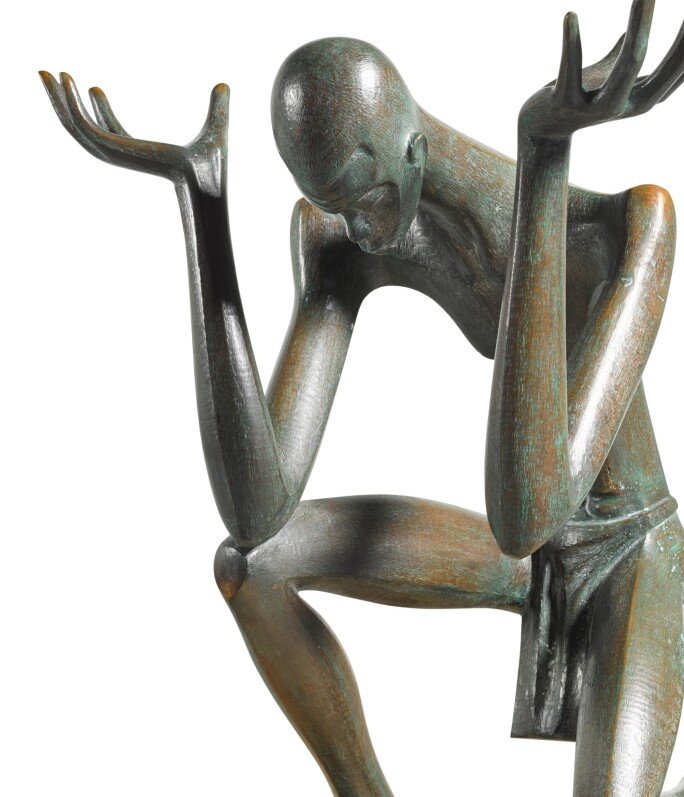 I’m also incredibly moved by the Gerard Sekoto’s Portrait Blue series and Ben Enwonwu’s masterpieces fill me with deep and overwhelming pride. During his lifetime Enwonwu was one of Nigeria’s leading cultural ambassadors and it’s incredible to watch his work be rediscovered by a new and fervent generation of collectors. 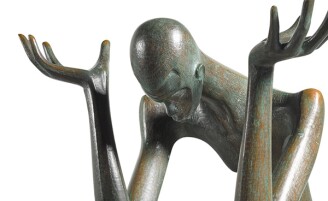