The Nexus of Art and Politics in the 20th Century

By Jonathan Wong
Translate this page
Great works of art are often held as expressions of artists’ inner states. However, these personal visions are rarely insulated from the influence of externalities such as social or political currents, and art will often mirror the times in which the artist lived. In the past century of modern and contemporary art, many have created meaningful works that bear witness to the historical and political events, both in the West and in China.

Art and politics are inextricably linked in much of Western art. To take a famous example, Picasso painted Guernica in response to the 1937 German bombing of a Basque town during the Spanish Civil War. In a trenchant anti-war political statement, Guernica shows the brutality of warfare. A horse rearing, a fallen soldier, a civilian with upraised arms, a roaring bull, a mother with a lifeless child – all appear in the painting contorted in pain, consumed by despair. Picasso worked for 35 days on this masterpiece, which created a sensation first exhibited at the Spanish Pavilion of the Paris Expo in 1937.

Then there is the intertwined relations of politics and pop art. Take one American artist, plus one Chinese leader, and you get the Mao portraits by Andy Warhol. The series came about after U.S. President Richard Nixon visited China for a summit with Chairman Mao Zedong in 1972. The historic visit normalized diplomatic ties between the two nations, and caused a significant shift in public opinion in the United States. Between 1972 and 1973, Warhol created 199 paintings of Chairman Mao in five format sizes, using a photograph of the Chinese leader that had been widely circulated during the Cultural Revolution. This was part of Warhol’s fixation on celebrity and iconic images, recreating and repeating them in bold color. In his work, Warhol succeeded in separating the political figure from its original historical context, and repackaged the image as an unforgettable symbol.

In recent years, street art has emerged as a force in opposition to high art and the cultural elite. Unsanctioned and created in stealth, these images and messages assert themselves in cities often as a spray-painted form of social commentary. The works of British graffiti artist Banksy began to appear in the streets of Bristol in the 1990s, deploying satire or subversion as a form of political activism. Expressions of Banksy’s social views can be seen all over the world, including the 2005 Rage, Flower Thrower. Painted on the side of a garage in Jerusalem, the image shows a masked rioter poised to attack, but he is throwing not a gasoline bomb but a bouquet of flowers. 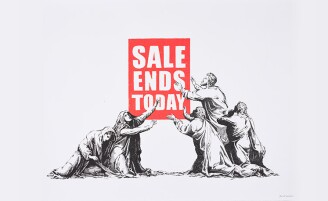 Politics in art has developed in a different way in China. Since 1979 and the first reforms, Chinese artists gained exposure to aspects of Western art history and ideas, which began to filter into the country for the first time. This period of liberalism spurred on a dramatic change in artistic styles. Wang Guangyi was among the avant-garde Chinese artists who embraced change. He was a champion of rationality, averse to emotionality especially as it related to worship of icons. In 1989, his work Mao AO sparked controversy, as it showed a grid of black lines superimposed on three images of Chairman Mao in triptych.

Saying goodbye to the idealism of the previous decade, Chinese artists flourished in ’90s, emerging on the global art scene in greater numbers. Invited to more and more overseas exhibitions, many artists established their identities through expression of political and social themes combined with Western pop art techniques. This eye-catching style, dubbed “Political Pop,” was pioneered by Fang Lijun, a leading figure of the Cynical Realism movement. In 1993, the yawning bald men in his painting Series 2, No. 2 graced the cover of The New York Times, which was viewed as international validation and recognition of the Chinese style. In the same year, he was invited to exhibit at the Venice Biennale, which paved the way for the many exhibitions of Chinese contemporary artists in the decade to come. Fang Lijun’s yawning man was intended as a psychological portrayal of China in the post-1989 period, and the artist became a defining figure of Chinese cultural circles in the 1990s.

During the same period, Liu Wei created the Revolutionary Family Series, inspired by a historical photo of Premier Zhou Enlai. The series was distinguished by the artist’s expressive styling techniques and playful cynicism. Another artist, Yue Minjun, carried forward this spirit in a self portrait bearing an enigmatic symbolic smile, a signature motif that became an important emblem of contemporary China.

Two Shanghai artists, Li Shan and Yu Youhan, also turned to political pop from the abstract style of the '80s. Yu Youhan’s paintings blend decorative styles reminiscent of traditional folk art with depictions of Mao and revolutionary figures. His art came from the urge to reflect societal change. Li Shan portrayed Mao with bold colors in the background, creating a separation of the subject from historical significance. In concept, this is somewhat reminiscent of Warhol’s Mao portraits.

A discussion of the relationship between art and political activism would not be complete without mentioning Ai Weiwei, who has made waves with his art for years. His oeuvre is completely different from the Chinese artists mentioned above. Ai Weiwei has been and influential and outspoken voice for many years, turning a critical eye towards cultural history, social current and global politics. 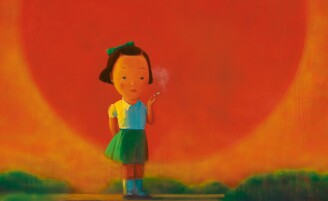