By Irene Gonzalez
Explore five works from the upcoming London Photographs sale that use constructed imagery to push the truth and reality to its limits.

P hotography was initially conceived as a medium that documented reality in a faithful way. However, as is the norm in any creative environment, artists have continuously defied the properties of the discipline in many different ways creating their own version of the story. One of these explorations resulted in what we call today staged or mise-en-scène photography.

This genre captures artificially constructed scenes made solely for the purpose of the shot. This approach to the medium was popularised in the 1980s through the work of iconic artists such as Cindy Sherman and Jeff Wall. On 16 May, works pertaining to this area in photography by Gregory Crewdson, Nicolas Feldmeyer, Tim Walker and Alex Prager will be offered in Sotheby's Photographs auction in London.

American artist Gregory Crewdson is perhaps one of today’s most celebrated artists specialising in tableaux photography. His widely acclaimed cinematographic shots portray scenes of suburbia in a mesmerising and often disturbing fashion. His images are large scale productions, resembling that of a film set. Every detail in his shots is meticulously planned and staged, paying special attention to lighting. Untitled (Bud Man), (1999), belongs to his seminal series Twilight.

Discussing about the meaning of the series he explains: "I have always been fascinated by the poetic condition of twilight. By its transformative quality. Its power of turning the ordinary into something magical and otherworldly. My wish is for the narrative in the pictures to work within that circumstance. It is that sense of in-between-ness that interests me."

Crewdson’s work combines the documentary approach of photographers such as Walker Evans with the dreamlike characteristics of filmmakers like David Lynch. However, the photographer’s fascination in the medium comes from the power of freezing a moment and narrating a story through a single shot.

After All 2, (2015), is a piece by Swiss artist Nicolas Feldmeyer. His work is disseminated through a wide range of medias including postcard collages, public art pieces, videos and in this case digital prints created with 3D rendering software. This stunning image is a great representation of the artist’s work as it expresses in an apparent simple composition Feldmeyer’s contemplative perspective of the world.

Through the use of landscape imagery and geometry, as well as drawing influences from Land Art and Taoist teachings, his work aims to clear the viewer of the overwhelming environment of contemporary life. Reminiscent of Hiroshi Sugimoto’s cinematic and timeless style, as seen in Time Exposed (1991), Feldmeyer’s oeuvre takes us to a simpler world, free of distractions. As he puts it: "the contemplation of space and light is core to my practice. There is an idea of stillness and vastness that moves me, a glimpse into the great silent."

His practice can be understood as an adaptation of tableaux photography in the 21st century. After All 2 depicts a staged pseudo-space, it is "the space you can never reach but only long for." This image depicts a rectangular slice of light that is injected into the scene which has been rendered by 3D software.

After graduating from university in 1994, Tim Walker worked as a freelance photographer for a year in London before moving to New York City to assist legendary fashion photographer Richard Avedon (lots 20, 24, 115). Upon his return to England, Walker rose to fame and established himself as one of the new and exciting photographers in the industry.

When asked about the genre, Walker remembered, “When I was at college, the idea of fashion was more immediate to me, whereas art photography, the depth of it, was a different thing. Storytelling – fanciful storytelling – can only be told through fashion photography. It's the perfect way to play with fantasy and dreams”.

Walker’s practice is very much rooted in mise-en-scène photography. As a true storyteller, he meticulously prepares his shoots, working with a team of set designers, make-up artists and costume designers. His images, such as Snow in Summer, Eglingham Hall, Northumberland, 2000, blur the line between fantasy and reality, creating new scenes that seem to belong in a fairytale. As he explains: "I create worlds and place them in front of you."

This stunning colourful lightbox is a unique work which was included in the exhibition, Dreamscapes at The Bowes Museum in 2013. As is the case with many of his works, Snow in Summer, Eglingham Hall, Northumberland, 2000, is a playful yet intricate composition which calls upon the viewer’s nostalgia for an era of innocence and youth. Everything in the shot, from the lighting coming in through the window, accentuated when lit, the delicate snow perfectly crafted into place, the interior of the room carefully decorated, and the framing of the image are all key elements in this photograph. Walker’s powerful storytelling capabilities are the cause to his forthcoming exhibition Tim Walker: Wonderful Things at the Victoria and Albert Museum in London this coming September.

Rich saturated colours, red lips and 1950s styling are all traits found in Alex Prager’s Week End series. This body of work features women in unexplained distress, embodying the human melodrama, located in strange situations such as Cathy (from the series Week End), (2009). The shots are reminiscent of film stills from a mid-twentieth century Hollywood movie as opposed to contemporary photographs. Similarly, to other artists working in the genre, she draws influences from documentary photographers like William Eggleston (lots 90, 92), and Diane Arbus, but also fashion photographers such as Guy Bourdin. As a result, her work blurs the line between fashion and editorial.

Prager is part of the new generation of artists who are embracing staged photography. Her retro photographs rely, in part, on their detailed mise-en-scènes to dictate the tone and atmosphere of scenes that might otherwise be too vague to fully understand. Over the course of the years, the scale of her production has increased considerably, with some of her last series having at times a cast of more than 350 members.

The American artist allows her images to be open narratives with multiple emotional layers which are up to the viewer to interpret and enjoy. When talking about the meaning behind her work she cites her hometown of Los Angeles as a key influence, “Everything that goes into my work is so personal. It’s Los Angeles as a strange, ugly, yet stunningly beautiful backdrop. It’s the experiences that I have that make me uncomfortable, or make me ask a question or try and solve problems. It’s imagery that I’ve seen in media, it’s nostalgia for a safer time, it’s so many different things." 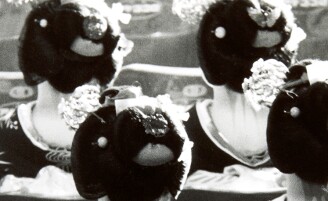