The Many Tipples of Charles Dickens

A lcohol flows freely in Dickens's fictional world, from the gin-soaked Krook who spontaneously combusts in Bleak House to Scrooge's offer to toast Bob Cratchit with "a Christmas bowl of smoking bishop” at the end of A Christmas Carol. Brandy is mentioned forty-four times in the Pickwick Papers.

Dickens is also perhaps responsible for one of the most perfect descriptions of the morning after overindulgence in Pickwick Papers: “When Mr Pickwick awoke, late the next morning, he had a confused recollection of having, severally and confidentially, invited somewhere about five-and-forty people to dine with him at the George and Vulture, the very first time they came to London; which Mr Pickwick rightly considered a pretty certain indication of his having taken something beside exercise on the previous night. Next morning he evinced an unusual attachment to silence and soda-water” (Pickwick Papers).

In England between 1825 and 1828 the licensing system was being overhauled and consolidated. The Free Trade movement was gaining momentum and in 1830 the then Prime Minster, the Duke of Wellington, removed the tax from beer and cider. Public drunkenness rose and The British and Foreign Temperance Society was founded. It was at this point that Dickens began his writing career as a parliamentary reporter.

“Wine and spirits were among the legitimate pleasures of life for him, along with cigars, and he was always ready to mock the temperance movement”

Dickens himself was a moderate drinker by the standards of the time, but far from teetotal, in one letter the author writes: “I arrived home at one o'clock this morning dead drink, & was put to bed by my loving missis.”

Dickens’ own taste and preferences for drinking seemed to evolve throughout his life. In his writing few things seem more Dickensian than a bowl of punch. “Smoking Bishop”, perhaps the most memorable Dickensian punch appears at the end of A Christmas Carol.

"A merry Christmas, Bob!" said Scrooge, with an earnestness that could not be mistaken, as he clapped him on the back. "A merrier Christmas, Bob, my good fellow, than I have given you, for many a year! I'll raise your salary, and endeavour to assist your struggling family, and we will discuss your affairs this very afternoon, over a Christmas bowl of smoking bishop, Bob!"

He seemed to also be quite partial to gin, writing in a letter once: “I am impatient to know how the Gin Punch succeeded with you. It is the most wonderful beverage in the world, and I think ought to be laid on at high pressure by the Board of Health.” During his later reading tours Tomalin describes: “Dickens’s favourite restorative between the two parts of his reading every night consisted of ‘A dozen oysters and a little champagne”.

Beyond the spirits and fizz, Dickens was also interested in wine. In 1846, the Dickens family spent a holiday travelling down the Rhine aboard a steamboat. Dickens writes of the trip: “The sunny Rhine journey by river steamboat was picturesque but uneventful. At Mainz there came aboard a German wine merchant, one Josef Valckenberg, a native of Worms, who spoke to Kate. "Your countryman Mr. Dickens is traveling this way just now, your papers say. Do you know him, or have you passed him anywhere?” When Dickens apologised to Valckenberg for his ignorance of the German language the wine merchant responded: "Oh dear! That needn't trouble you, even in so small a town as Worms there were at least forty who spoke English and many more who read Dickens's works in the original".

Lot 110 in the sale is an outstanding presentation copy of the first Bradbury and Evans issue of A Christmas Carol inscribed by Dickens to Valckenberg in 1847.

The House of Valckenberg was founded in Worms on the banks of the Rhine in 1786. Throughout the next century they bottled and exported wine, supplying the royal families of Europe. Later that year Dickens praised the house's speciality Liebfraumilch in a letter to Valckenberg, writing: "All I have to say on the subject of the Liebfraumilch, is, that if it should come here, I will drink in it, the heath of everybody, great and small, in that large family-house at Worms" (25 June, 1846).

Lot 220 in the sale is a remarkable autograph inventory of the supplies in the Gad's Hill cellar. It can be compared with an 1865 inventory of the cellar at Gad's Hill (on loan at Charles Dickens Museum); in the intervening years Dickens appears to have switched from gin to whisky. The inventory lists casks of sherry, brandy, rum, and whisky present in the cellar ("...Besides which there are 5 Gallons in Stone Jars of the Whisky, to be used first"), with an explanatory note on the inside cover ("Details of Contents of Casks in the Cellar - an account being kept on a slate in the cellar of what is drawn daily from each cask - and added together in this Book at the end of every week beginning 6th June 1870").

This document is one of the last manuscripts that Dickens wrote, and it is poignant to think of the great novelist busying himself with domestic economy in the final days of his life. The day that he went down to the cellar to update the notebook was also the day that he spoke to his daughters Katey and Mamie for the last time. At 6pm on Wednesday 8 June he came into the dining room complaining that he felt unwell: he was suffering from a brain haemorrhage and soon collapsed into incoherence then unconsciousness, dying the following day. 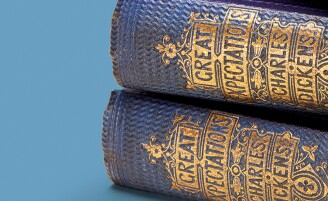