By Diana Scarisbrick | Dec 1, 2021
These majestic jewels mounted with cameos and intaglios certainly evoke the style of the Empress Josephine -her rank as wife of Napoleon Bonaparte, her impeccable taste and her interest in antiquity.

These majestic jewels mounted with cameos and intaglios certainly evoke the style of the Empress Josephine -her rank as wife of Napoleon Bonaparte, her impeccable taste and her interest in antiquity.

These majestic jewels mounted with cameos and intaglios certainly evoke the style of the Empress Josephine- her rank as wife of Napoleon Bonaparte, her impeccable taste and her interest in antiquity. From her first visit to Italy in June 1796 to December 1797, as the wife of the all conquering General Bonaparte she was acquiring engraved gems from Rome and receiving them as gifts from victorious generals wanting to please her and from members of the Bonaparte family resident or travelling in Italy. Of these, Napoleon’s sister Caroline and her husband, Joachim Murat were the most enthusiastic acquirers of antiquities.

Advised by Dominique-Vivant Denon, Director of the Musée Napoleon, she learnt to distinguish between the various hardstones used, to appreciate the virtuoso engraving techniques, and to recognize the gods and heroes of mythology, successive Roman Emperors and Empresses, and the significance of the scenes depicted. Napoleon approved. Since the noble art of gem engraving had been patronized by the rulers of the ancient world and he liked to present himself as their successor Napoleon associated this technique with his own regime, promoting contemporary French artists such as J.H. Simon, engraver of the official seals, and R.V. Jeuffroy, appointed director of a school of gem engravers. From 1805 the Prix de Rome, hitherto reserved for painters, sculptors and architects was also awarded to engravers. He bought extensively from the Italian engravers such as Nicola Morelli and Giuseppe Girometti who were bringing the great Roman tradition of gem engraving to a triumphant conclusion, and produced his cameo portrait taking advantage of his classical profile, so he looked like a modern Augustus. To encourage his wife’s interest in this art, he gave her the magnificent double portrait of Ptolemy Philadelphus and Arsinoe II, engraved in 3rd Century B.C. Alexandria. Napoleon had removed this cameo from the Vatican after the conquest of Rome, but it already had a long history having been in the Gonzaga of Mantua collection and, after Josephine had presented it to the Russian Tsar Alexander 1 in 1814, the cameo became and remains the glory of the Hermitage Museum. 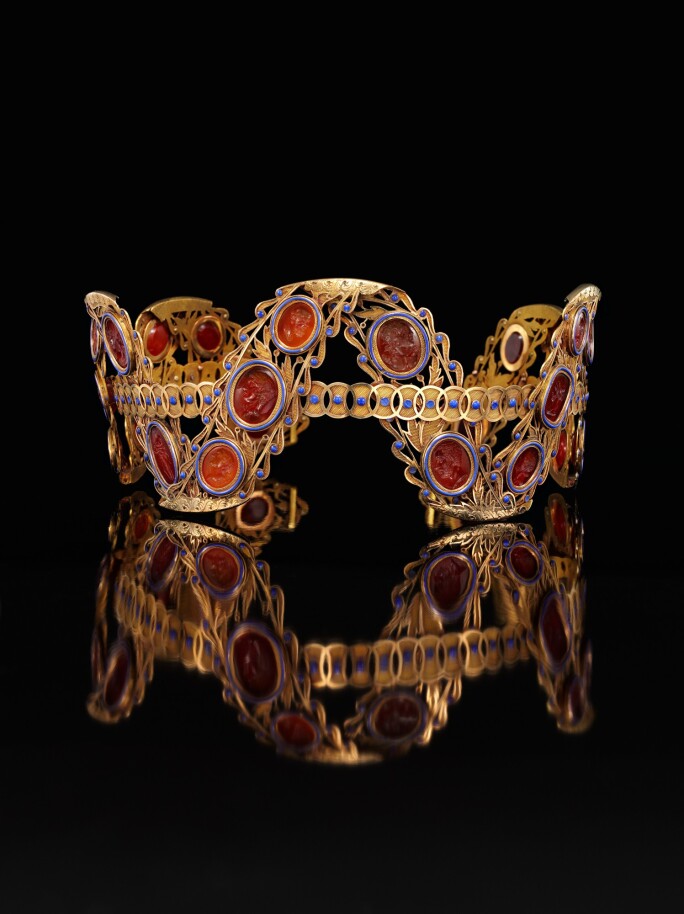 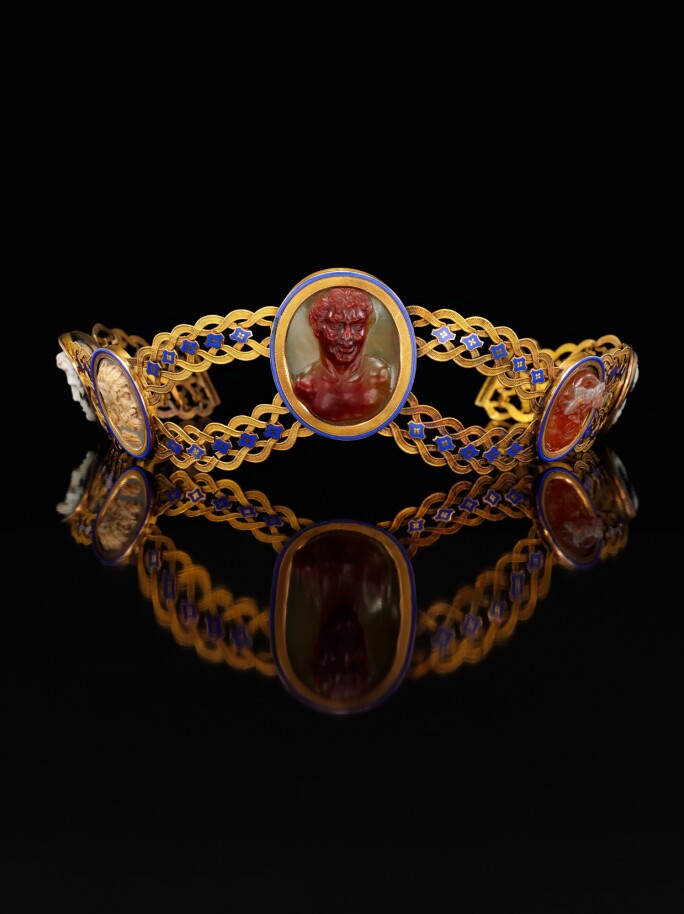 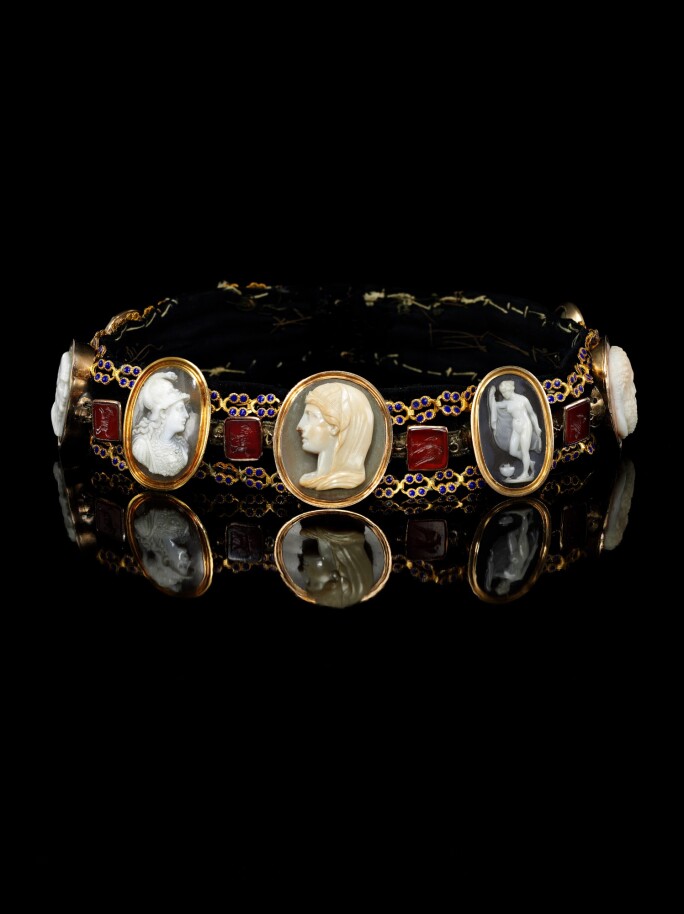 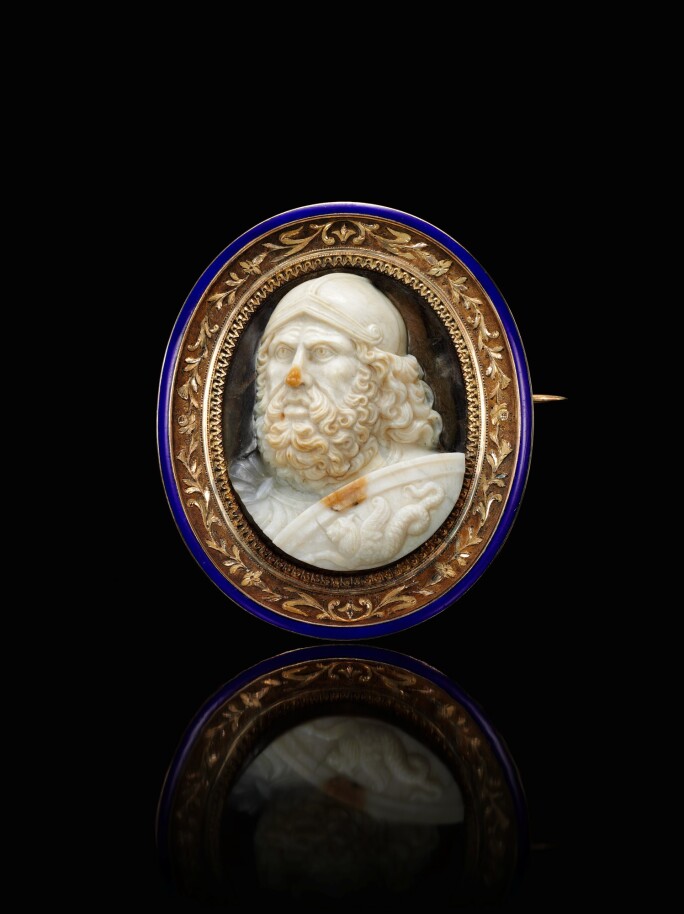 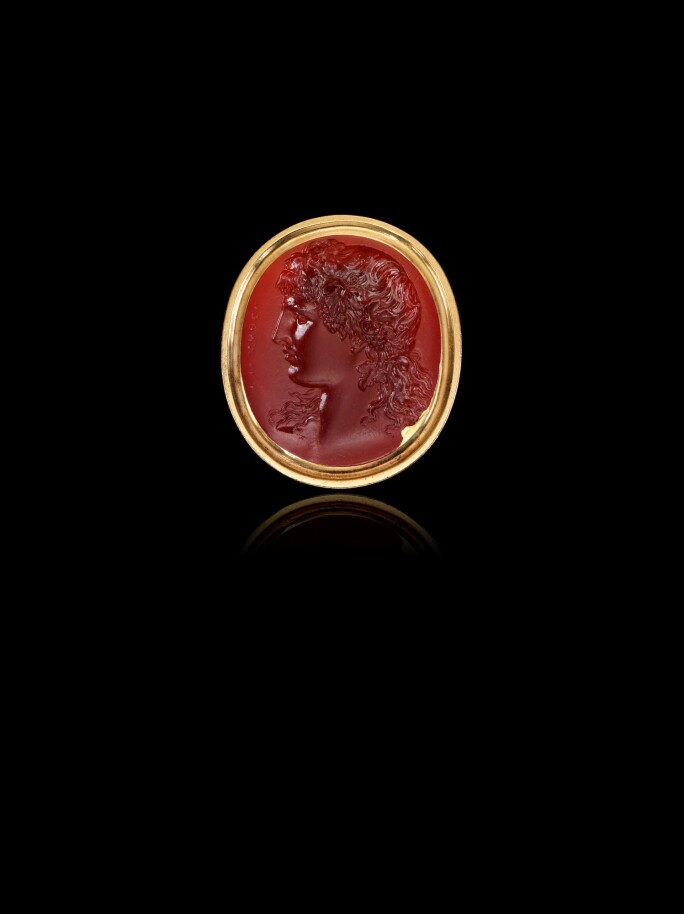 But Josephine was more than a collector. Where her influence was most felt was in the way she saw that cameos and intaglios could take their place with diamonds and pearls as fashionable jewellery. She took them out of the collector’s cabinets and encouraged her jewellers to mount them in attractive settings, worthy of the images depicted. Thus she is wearing a bandeau and necklace of cameos representing the Labours of Hercules in a dramatic portrait painted by Andrea Appiani in 1801, perhaps intended as an allegory of Napoleon’s victories. H. Vever, L’Histoire de la Bijouterie Francaise au XIX* Siecle (1908) Vol 1, p 69-.70 mentions another portrait in which she wears a necklace composed of 15 to 18 large oval cameos within diamond borders and linked by four rows of diamond set gold chains, a band of large cameos encircles her forehead and there is a very important crown placed above her chignon, which could be similar to the examples on sale. In 1808 the official jeweller, Nitot, created a pearl parure composed of 45 cameos and 36 intaglios removed from the national collection by imperial decree, but which unfortunately proved so heavy that there is no record of it being worn by Josephine. She must have been disappointed, as according to Mademoiselle Avrillion, in charge of her jewellery, Josephine’s greatest pleasure when at Malmaison was to sit at a table with her ladies beside a fire, and show them the cameos she was wearing that day. Then she would call for the boxes containing the rest of the collection to be brought so that every piece could be examined.

This type of jewellery struck just the right note in Paris during the Consulate and the Empire. According to the Journal des Dames et des Modes (1805) ”une femme à la mode porte des camées à sa ceinture, des camées à son collier, un camée sur chacun de ses bracelets, un camée sur son diadème”. Such jewels went well with Josephine’s preference for the simplicity of the chemise dress à l’antique. Closely fitting, décolleté, sleeveless, usually made of embroidered white muslin, or of lawn with gold and silver threads, it suited her perfectly though on grand occasions she was obliged to appear in the more elaborate new style of court dress. The inventories of her jewels drawn up in 1804 and after her death in 1814 list numerous examples of her cameo and intaglio jewellery though do not provide any details, except for the intaglio used to seal her correspondence which depicts the Three Graces, after the marble by her favourite modern sculptor, Canova. However, the quantities recorded represent only a fraction of what passed through her hands as she never stopped buying, nor giving jewels away. The Lloyd Baker tiaras are no exception in lacking documentary proof. As some of Josephine’s jewels must have come up for resale this could be how the parure came into the possession of British travellers shopping at one of Josephine’s many jewellers. 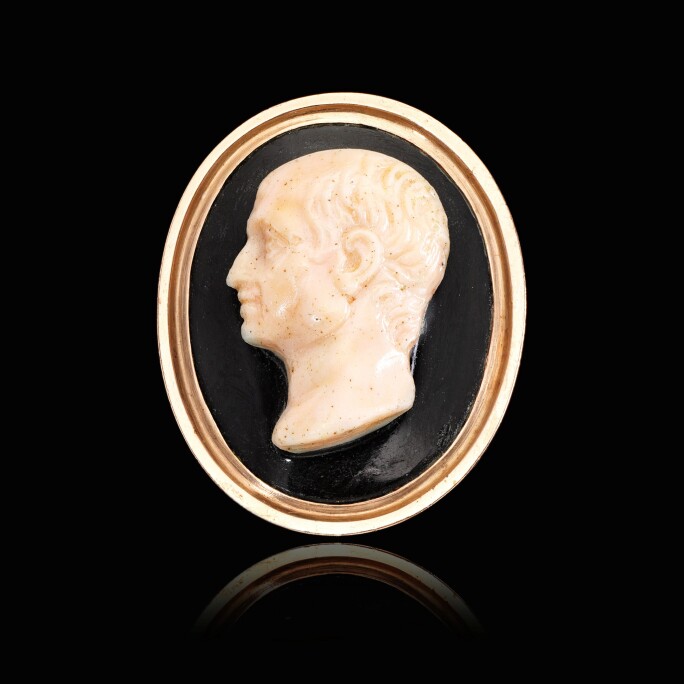 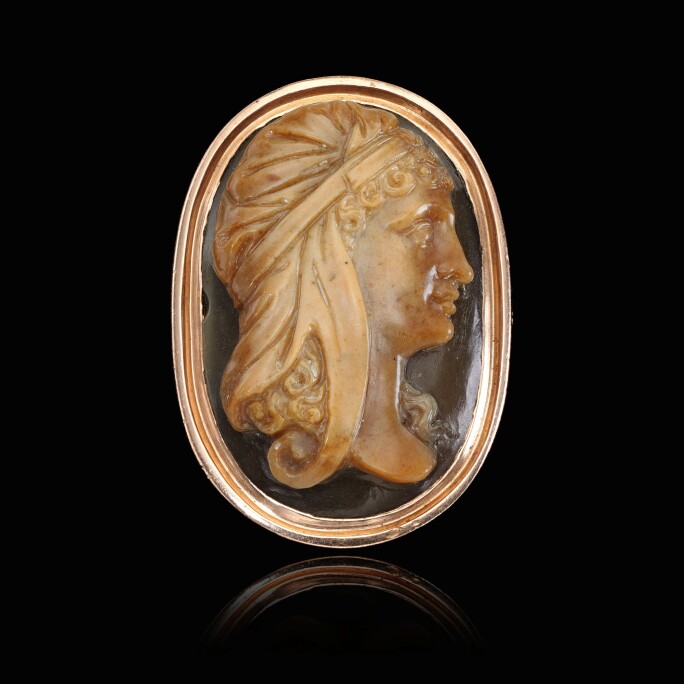 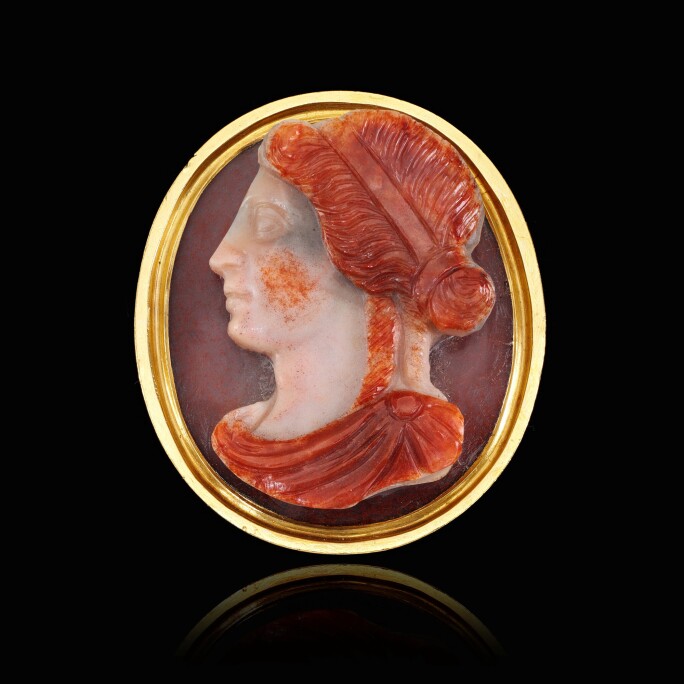 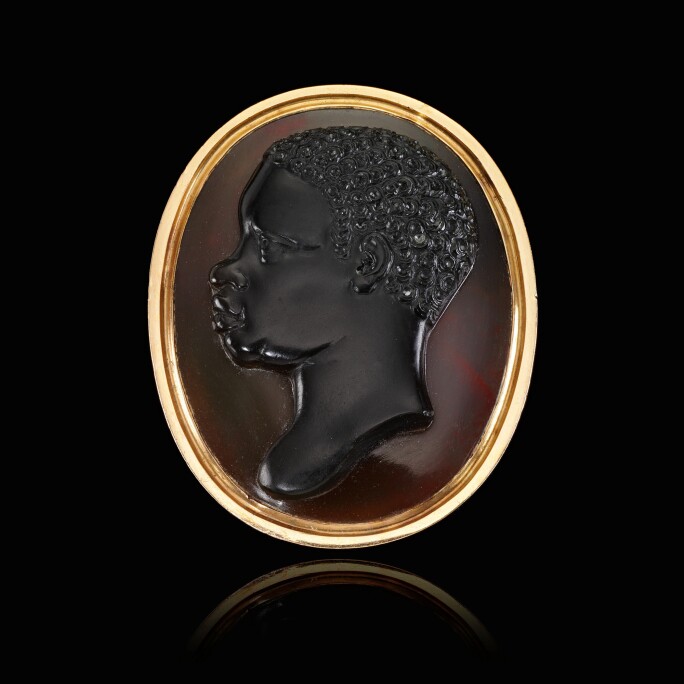 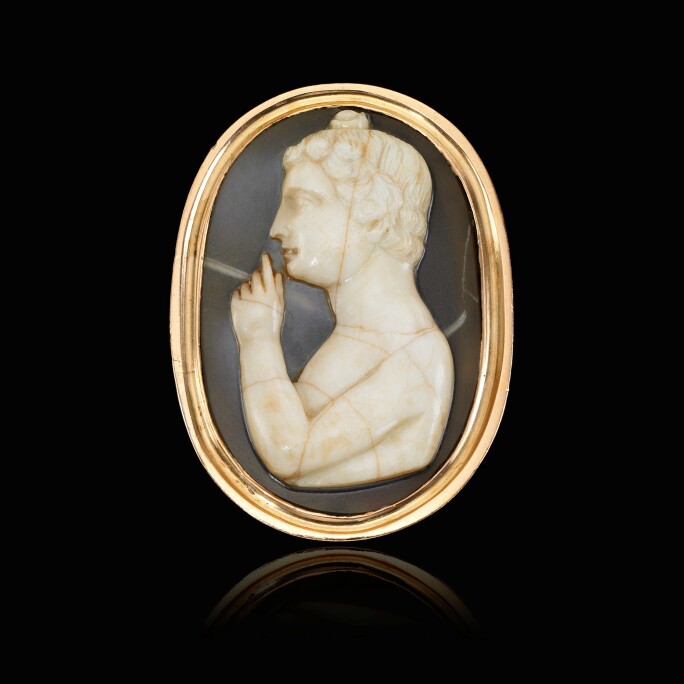 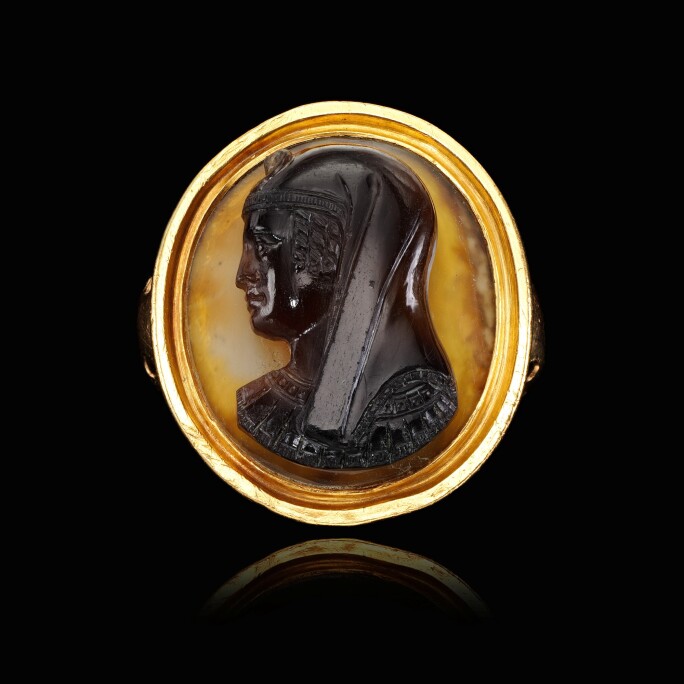 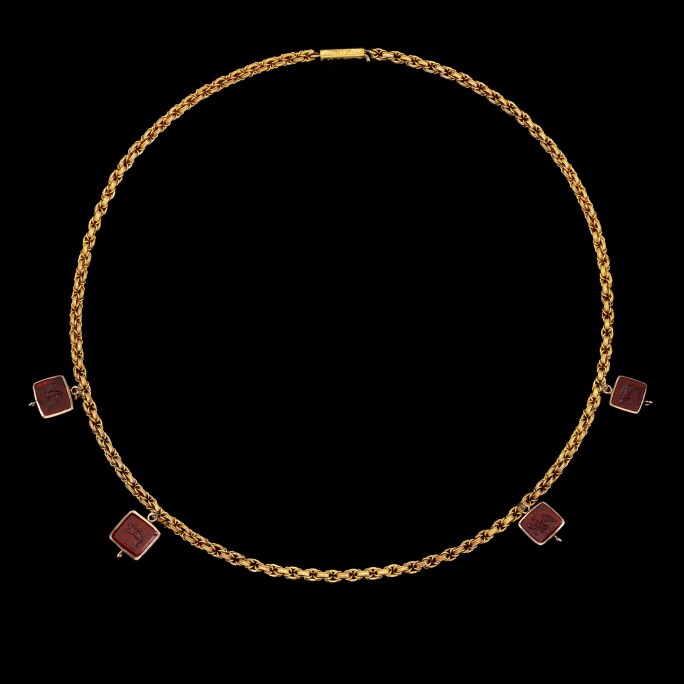 Her interest in antiquity was fully expressed in her dedication to the beautification of the interiors and gardens of her country home, Malmaison, situated half an hour away from Paris. There the walls were hung with the beautiful paintings from Pompeii representing Apollo and the 8 Muses, each glowing with colour and very well dressed. A magnificent group of Classical and Hellenistic Greek vases placed on marble topped tables depicted the activities of the Olympian gods and scenes from the daily life of the ancient Greeks. This magnificent collection which was given to her by Ferdinand IV, King of Naples and Sicily inspired her to go on acquiring more antiquities, so that Malmaison could display a panorama of the arts of the ancient world. Yet there was nothing of a museum in Josephine’s installation of these treasures, for she placed them as part of a refined and elegant domestic setting, created for the private pleasure of the imperial couple.

How was it that since the British and French were in the midst of a long war that British travellers could cross the Channel and visit Paris during the Consulate? The answer is that a truce was agreed at Amiens and in 1802 the English took advantage of what was no more than a brief respite from the hostilities. They were curious to see Napoleon’s court, encounter Talleyrand and other dignitaries, admire the works of art amassed by D.-V Denon at the Musée Napoleon, enjoy the shopping and socialising. Bertie Greatheed, an observant Warwickshire landowner was amazed to find Paris “antique mad”, even at the theatre, where the great actor Talma was constantly “Etruscanising himself”. Mrs. Greatheed had her earrings remodeled in the new style, and like other English women, updated her wardrobe à “l’antique”’Similarly, the most fashionable jewellers were besieged by smart travellers who would have been shown how cameos and intaglios could be used in gold and enamel settings for whole parures which were “occupying the place of honour”.

Cameos and intaglios were not only on view in the Paris shops but with other antiquities were on permanent exhibition at the Bibliothèque Nationale. Being an art lover, Bertie Greatheed was impressed that this formerly royal collection was now “liberally open to be used by all the world”. It was in this cultural atmosphere that these parures were acquired, triumphantly showing the world how Napoleon had successfully reinstated Paris as the creative centre for luxury and fashion, lost during the years of anarchy which followed the revolution of 1789 and was now the artistic capital of Europe. In this task his greatest asset was the incomparable Josephine, who believed, as John Keats, declared in his Ode to a Grecian Urn, that “beauty is truth, truth is beauty- that is all /Ye know on earth and all ye need to know.” 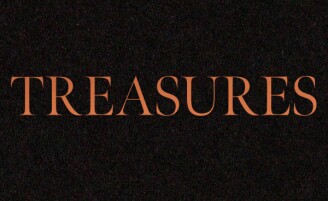