The French Connection: Scottish Colourists on the Continent

How the Colourists Shocked the British Art World

On 12 June 2018, Sotheby’s will offer at auction a group of pictures from one of the best-known private collections of Colourist art. Featuring paintings by George Leslie Hunter, Samuel John Peploe, Francis Campbell Boileau Cadell and John Duncan Fergusson, the Harrison Collection showcases the finest examples of Scottish Colourist art with brightly-hued still-lifes, shimmering interiors and vibrant landscapes. Whilst these artists were Scottish by birth their work is essentially French in spirit.

Without their French contacts and experience, none of the Scottish Colourists would have developed their art as we know it. For all, visiting and living in France invested their ideas with a new vision.

The term 'Scottish Colourists' has now become inextricably associated with the work of these four individual artists. Their bold use of colours and expressive technique draws parallels with the Impressionist and Post-Impressionist painters at the turn of the twentieth century, but at the same time presenting unique interpretations of subject and style that would come to epitomise these Scottish painters.

John Duncan Fergusson had the most intimate and long-lasting relationship with France. Paris, 1907 shows the direct influence of the leaders of the Fauve movement, Henri Matisse and André Derain. Fergusson embraced their radical use of brilliant colour, expressive paint application and savage confidence. Like the Post-Impressionists he painted the everyday and unremarkable and made it vibrate with intensity and colour.

During the early 1900s the young Fergusson and fellow Scotsman Samuel John Peploe painted together in France, sometimes with their easels placed side by side working en plein air in the manner of the Impressionists. Although undated, Peploe’s The Luxembourg Gardens, Paris was probably painted in 1907 or 1908 at a time when Fergusson painted similar pictures in the same gardens. These small pictures by Fergusson and Peploe are arguably the most ‘Impressionistic’ of the Colourists’ pictures, so immediate and vital in the energy of their conception.

A Change of Scene

Although Paris continued to have a strong draw for Peploe and Fergusson, they also sought out new painting grounds further south. At the coastal resort of Royan Peploe painted a series of brightly coloured townscapes of red roofs and malachite green foliage set against a cloudless swathe of blue sky. They were different from anything he had previously completed, using paint straight from the tube and unmixed. The House in the Woods is a perfect example of this new approach to painting. The brushstrokes are contrasting and rapid - with thick impasto swept in opposing directions to give an intense sense of movement.

For George Leslie Hunter a change of scene to the Cote d’Azur engendered a new wave of artistic inspiration. The close proximity of Matisse and access to the beautiful Provencal landscape encouraged him to adopt a dramatic new colour scheme. In The Bay, Juan-les-Pin luscious flicks of scarlet, canary yellow and turquoise dance over the surface of the canvas showing the vibrancy and warmth of the French Riviera.

It was not only the pictures painted in France that reflected the influence of modern French painting. Back in Scotland Peploe imbued his landscapes of Iona, an Island off the west coast, with the same brilliant colour that he had learnt to use whilst in France. Peploe was invited on his first trip to Iona by his close friend Francis Campbell Boileau Cadell and the two became fascinated with the luminous shimmering light of the beaches and sea, bringing a bold modern aesthetic to a uniquely Scottish setting.

When not painting the beaches of Iona, Cadell created glamorous interiors back in Edinburgh which equally express his inspiration from Impressionist and international art. Cadell had studied for three years in Paris from the age of sixteen and it was in these formative years that French art inspired his initial painting style. Reflection of 1915 is a symphony in refined elegance, quiet contemplation and refracting light. Cadell’s colour harmonies are always subtle and well balanced and in Reflection, the cool greys and whites are punctuated with bright accents of pink and blue in the porcelain and roses on the mantelpiece and the warm tones of the girl’s flushed cheeks and red lipstick.

Reflection and The White Room, also painted in 1915, demonstrate the influence of Whistler and Manet both of whom had a profound effect on Cadell’s developing style.

In the summer of 1924 all four Colourists exhibited their works together for the first time, in an exhibition entitled Les Peintres de l’Ecosse Moderne at the Galerie Barbazanges in Paris. By this time the Colourists had reached their maturity but they continued to seek out new subjects for their art underpinned by a bold and modern style learnt in France. 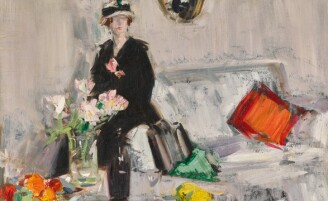