The Enduring Appeal of William Blake

A lthough largely unrecognised in his lifetime, William Blake has since become one of the most influential figures in British art history, and his work still draws huge crowds. Tate Britain’s blockbuster exhibition of the visionary poet, printmaker and painter has garnered rave reviews since it opened in September and allowed visitors to experience his illustrations and illuminated books as they were originally meant to be seen.

As the gallery displays more than 300 works, including the famed Songs of Innocence and Experience 1794, and some of his best-known paintings, such as Newton and The Ghost of a Flea, Sotheby’s offers a stunning lot of Blake’s renowned Illustrations of the Book of Job, dating from 1825, in the English Literature, History, Children’s Books and Illustrations sale.

A wonderful example of Blake’s dream-like interpretations of Christianity and signature style that nodded to both Renaissance Masters and Gothicism, the illustrations are also extremely rare, as one of just 100 copies that were made without the word “proof” included.

Blake was both deeply spiritual and sceptical of organised religion; subsequently his religious works were often controversial – seen as either introspective and haunting, or blasphemous and rebellious.

The original designs for these particular illustrations were actually completed by Blake in around 1805-1806, for Thomas Butts, a clerk to the commissary general of musters who was also Blake's major patron. They were only published, many years later, after the painter John Linnell, a friend of Blake’s, offered to finance the engraving and printing.

He was hoping to help provide some income for Blake, who by then was in his sixties and financially struggling. The pair borrowed the plates from Thomas Butts in 1821 and publication was planned for 1825, although this was delayed until 1826.

According to Linnell's accounts, there were 150 "proof" copies printed on India paper, 65 French paper "Proofs," and just 100 plain copies on "drawing paper" printed after the word "Proof" had been burnished out of the lower right corner of each plate, which makes this example particularly important. It is thought that this may be one of the earlier impressions of the edition of 100, as the presence of the two watermarks suggest that remaining paper was used from the earlier "proof".

Blake died in August, 1827 and initially, his contribution to British art and culture was largely forgotten. But subsequent artists, academics and thinkers rediscovered his work, finding progressive thinking and ambitious symbolism in his illustrations that still resonates today. 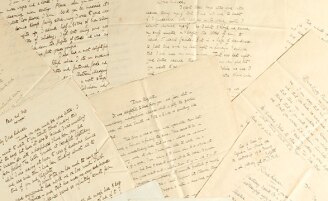