"Ascending to the galaxies, reaching the Hua and Song Mountains. Rain nourishes far and wide, it cultivates immortality. Riding on the energy of the cosmos, it travels through the sky."

About 700 years after Southern Song painter Chen Rong wrote his poem, the ‘cloud dragon’ has reemerged, this time in Zao Wou-Ki’s masterpiece 21.04.59. Ancient, powerful brushstrokes travel across the canvas, turning and twisting along the edges, combining to create a grand arch like a bow. This dark, magnificent dragon rolls and spins throughout the clouds, heroic and powerful.

Zao created 21.04.59 at a time of important changes in his life. The Oracle Bone Series had been born and the artist was emerging as a rising star in the international art scene. His first marriage ended in 1957, and he left Paris for an extended journey that took him through America, Hawaii, Japan and Hong Kong, finally returning to Paris in 1959. During this period, he encountered new postwar movements in art, widened his international scope, established his subsequent creative position and met Chan May-Kan, his second wife. These experiences removed all mental barriers, releasing the pent-up energy into a torrent of creativity. Like the cloud dragon, Zao ascended to an unrivaled artistic peak.

Integrating Oneself into the Landscape

In Oracle Bone Period of the 1950s, representative paintings, such as 21.04.59, reveal Zao’s essential process of reflection and the disassembly of identity as a method of rediscovery. In 1954, Zao Wou-Ki returned to his own culture, seeking inspiration from oracle bone scripts. In these works, the artist’s innate cultural essence is fully expressed on the canvas. They mark his transition from representational to abstract art. At the early stages, primitive characters appear in an irregular and varied rhythm. Each line and brushstroke resembles writing. A fundamental shift in Zao’s approach emerged around 1958 to 1959, near the end of this period. Gradually, powerful brushstrokes broke free from the constraints of specific characters. The strings of crisscrossing abstract shapes in 21.04.59 resemble words and yet are not actual words. These shapes leap to the sky, clash with each other. They come together, and then disperse, displaying an unprecedented life energy so vast that it can create whole universes.

"Safety and danger interchange, misery leads to happiness and vice versa, gentleness and urgency press each other on, congregation makes dispersion and vice versa."

At a certain stage, Zao Wou-Ki no longer borrowed from external matter, be they oracle bone scripts or bronze vessel inscriptions. The pulsating composition, dispersing and coalescing, reflects internal insights on the ephemerality of life and the ever-renewing nature of the cosmos. The primitive and rustic lines appear independent yet interdependent, turbid, while traveling up and down in its own rhythm. The work conjures images of a cloud dragon dancing to music, rhythmically undulating in a torrent of color and lights, a powerful announcement called forth from atop the peak of Zao Wou-Ki’s Oracle Bone Period.

The cloud dragon in 21.04.59 is breathtaking and grand, taking us as far as the very beginning of the universe. The artist employs a dark palette characteristic of the late Oracle Bone period. The boundless, black ocean is bottomless, with strands of silvery-gray barely just visible, while other parts show patches of earthy brown. Such richly layered base colors are infused with different shades of ink in Chinese painting, imbuing a sense of movement in the oil paint. Each subtle change of color influences the other— at times restrained, and at times free and vivid. Woven into the composition are also indigo and midnight blue — the auspicious “purple mist from the East.” This vast domain is the inner landscape of the artist himself, a vision of endlessly variety, heroic and masculine, conjured at the tip of Zao’s brushstroke.

Ascending to a World-Class Stage

Postwar abstractionism was at its height during the 1950s, and in the decade, Zao Wou-Ki gained wide acclaim in Europe and America with his Oracle Bone Series—works that are now prominently featured in the collections of major institutions around the world. In 2013 and 2019, Sotheby’s had the honor of being entrusted by The Art Institute of Chicago and The Solomon R. Guggenheim Museum to sell two monumental works from the Oracle Bone Series, respectively, Untitled and Abstraction, both created in 1958. When viewed together, a subtle shift is noticeable in the final stage of the Oracle Bone Period. The refined, sharp lines of Untitled, gradually transform into the inflated, flickering forms in Abstraction, and then finally break free and soar high in 21.04.59, crystalizing into its ultimate form.

The present work has been featured in 16 public exhibitions across Asia, Europe and South America since the 1970s, and has been published in at least 15 albums and exhibition catalogues. As the most representative example of the Oracle Bone series, 21.04.59 is undoubtedly a top museum-class painting among Zao Wou-Ki’s contemporary works. Now appearing at the auction for the first time ever, this work is truly a once-in-a-lifetime opportunity for collectors. 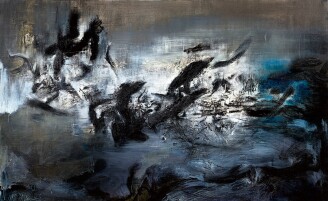