I first met Joe and Brenda Calihan quite by chance in Dublin in 1992. Even during this first meeting it was clear that we had a mutual understanding and trust in each other. This relationship continued to grow over the following years and has become a lasting friendship.

They were in Ireland for a few days, and, enamoured by our art and cultural heritage, they explained that they would like to buy an Irish painting that would celebrate Joe's ancestry and also complement their existing collection of American art. They suggested that I might help them find a suitable work. I was struck by their sincerity even during our first conversation. As they were unsure of what they would like and unfamiliar with Irish painters, we decided to meet the next day in the Municipal Gallery to see a selection of Irish artists. We walked through the rooms discussing each of the artists together. It was when we came to a work by Paul Henry that the powerful imagery of the west of Ireland instantly connected with them. Looking at the painting together, they realised that they had found what they were looking for. They agreed there and then that they would like me to buy them a similar Paul Henry.

Not long after this first meeting, I received a letter from Joe and Brenda saying that they would like to begin a collection of Irish Art. And in 1994 they and their family came to Ireland for a holiday and asked me to join them on a visit to the West. It was a wonderful trip which has left us with great memories; I showed them the places that I loved and that have so often been the chosen subject matter of many of our great and influential painters. This trip not only placed a very secure foundation for our relationship but it also gave strength to what was to become Joe and Brenda’s crystal clear vision for the collection.

Initially, they were keen to buy a Yeats - an early one - having been impressed with the examples of his work that they had seen during their recent visits to Ireland. But over time, their interest grew and broadened and together they allowed my clearly defined brief to become a very simple but effective mission; this was to collect only the finest example of the artist that we could find; each work was to be Museum quality; and in addition to this, each had to tell a story. Something about Ireland and our past so that any viewer could in some way get a sense of the country and our history. All Irish painters were to be considered once their work fitted the criteria for the collection.

Over the eight years we spent compiling the collection, Joe and Brenda became more and more receptive to different examples of paintings by Irish artists. What began with a Paul Henry gradually grew to a very carefully selected representation of Irish painting of the 19th and 20th Centuries. I would send monthly reports outlining details of any works of note that were coming up for sale. I rarely recommended buying anything, but occasionally I would find one that I knew they should have. Sometimes, I would have to persuade them, there would be long conversations, and occasionally Joe would ask me to commit to paper why I wanted a particular picture to be included in the collection. Once we decided to buy a picture we rarely missed it.

The Circus was the first Yeats that we bought; painted in 1921, it fulfilled their desires for an early example that narrates a story of past lives and times in rural Ireland. We bought the Moynan on the same day; it was covered in discoloured varnish, but was perfect for the collection. On the morning of the sale, I changed my mind about how much we should spend on it just hours before the sale began and I had to go to a phone box on Clare Street to ring Joe to increase our final bid. But I had to wait until the time difference meant that he would be in his office; that was 2pm and the sale began at 2.15pm. Once he agreed, I ran back to the auction house, and left our newly revised bid with our friend Oliver, the porter. Hotly contested as I thought it would be, the hammer finally fell to Oliver for our final bid. This one is extra special too because I met George, my husband while buying it. He was one of the under-bidders.

Of all the paintings in the collection I think I am most attached to Pax. I had to persuade Joe and Brenda quite hard to buy it, but once they were on board there was no way we were going to miss it. Our purchase caused quite a stir. The Phoenix magazine wrote about it, suggesting how much it had cost per square inch, and they wrote ‘Maggy Brittain’s Pax’ on the front cover which went up onto all the billboards across Dublin. Soon after this George and I travelled to Pittsburgh with some of our latest acquisitions for the collection, but we were so worried about Pax going in a crate that George hand carried it all the way.

We never deviated from our brief, and the Calihan Collection took its shape naturally as each work was added, growing in harmony with Joe and Brenda’s appreciation and interest. One of the last pictures we bought was Sunday Evening in September by Yeats; painted in 1949, this ethereal celebration of Dublin life is a testament to this.

I am so fortunate to have met Joe and Brenda in 1993. Together they have allowed me to share my passion for Irish paintings, and have given me the confidence and freedom to always trust my judgement.

It has always been the Calihan’s wish that their paintings should be loved and enjoyed by many people. Going to auction now, I hope that these wonderful works will continue to give as much inspiration and joy to their new owners as they have done for us during our time with them.

Maggy Williams is a fine art consultant. Together with her husband George they run George Williams Antiques in Co. Meath. 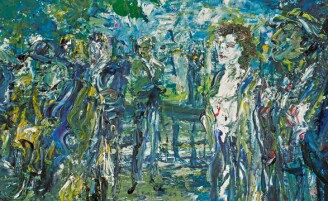