The Brits are Coming: Matthew Collings on a Rich & Diverse Artistic History

B ritishness isn’t necessarily great in an art context. When I was at art school in the 70s, the word meant provincial. The last time I remember Britishness being a thing in art was the 80s, with School of London and the Young British Artists. From each end of the decade, the first movement was considered deep and the second ironic.

But both labels: “London,” “Young British,” were understood to be knowingly provocative. This is because nationalism in art had long ago ceased to mean anything, despite roundups of British art sent abroad by the British Council, and surveys of it at the main public galleries, and the ever-recurring British pavilion at the Venice Biennale. These phenomena were indulged rather than treated as urgent. Britishness was archaic.

The School of London, invented by the artist RB Kitaj, and YBA, invented by Charles Saatchi, were successful in making the old provincialism seem the new excitement. A model in history does exist for this. Hogarth in the early eighteenth century positivised Britishness when the prevailing opinion was that if you were wealthy and wanted art you got it from abroad. Hogarth’s defeat of the prejudice was a complicated act. The amazingly effective delicacies of colouring in some his best pictures, is all French Rococo. This means that the very scenes in his most famous series, Marriage a la Mode, where European taste is mocked as useless and decadent, are marvellous to linger over precisely because of the very real influence of that taste on Hogarth.

The art in this sale is exciting because the individuals who made it and happen to find themselves categorised as British (there’s certainly no innate British “spirit”) are open to artistic ideas from everywhere in the world not only the immediate environment. The earliest work, John Lavery’s 1912 scene of the Lido in Venice, is a model of French Impressionism. Edward Burra’s War in the Sun refers to the Spanish Civil War. His distortions come from Surrealism, which was first defined as a movement in Paris.

Ben Nicholson’s abstract balances would be impossible without the Dutch artist, Mondrian, who in fact stayed with the Nicholson family in their house in Hampstead, in the 30s. The Russian born Constructivist sculptor, Naum Gabo, also stayed there. Peter Lanyon’s painting Rising Air which has a structure that appears to alter and shift yet is always visually forceful, is influenced by his experiences piloting a glider over Cornish terrain and also by his appreciation of the gestural sweeps of New Yorkers Franz Kline and Bill de Kooning.

The wealthiest artist alive which means the wealthiest there’s ever been, Damien Hirst, is represented in the sale by one of his famous spot paintings. These came originally from post-War international conceptual art. They say “Hirst” now but when he started doing them in the 80s they said Sigmar Polke and Gerhard Richter. These German painters were influenced by conceptual art’s frequent mockery of painting, its assumption that as a cultural form painting couldn’t possibly be relevant. Polke and Richter created paintings that were deliberately funny, kitsch and weird and made you scratch your head about meaning.

A regular grid of colours that look nice, and seem to come from a shop, was done many times by Richter in the 1960s. Polke too turned consumerism into something strange instead of attractive, or attractive because it was strange. It turned out Hirst could have his own intimidating weirdness and not just seem a copyist. The point with him was to make an art conundrum super-known, no longer confined to the realm of the clever, but open to everyone to be mind-boggled by. “Britishness” invaded, in the form of the mass media in Britain always paying attention to Hirst from the start as a scandal Britain ought to know about.

To return to School of London. London-based Kitaj, its inventor, was from Ohio. He’s an example of what defines art from within these shores. Not only does it have a lot of different approaches and meanings, so there never really can be any possibility of a meaningfully British art mood or atmosphere, but, also, it’s made by artists who often even aren’t British. Kitaj appreciated the artists of his moment being talented not for being Londoners.

The location was where they happened to go to art school and lived, mostly. And it was fun to give them the London name because it sounded new in the sense of a counter influence to American art, which dominated in 1976, the time he wrote the fateful words: “In fact I think there is a substantial School of London...” Before that, France dominated, so now here was London instead of New York and Paris. (And Berlin and Vienna and Moscow.).

As the London School idea took off, and became officially taken up, so by the 80s few were aware it hadn’t always existed, Kitaj was delighted to point out how German and Jewish and generally cosmopolitan the reality of it was. He used the term first in the catalogue for a show he organised at the Hayward Gallery called The Human Clay. It surveyed work by figurative artists in Britain. Plenty of them weren’t British and plenty no longer painted figuratively. It was the endless variety of ways in which the human form was depicted by his peers and friends that Kitaj wanted to convey. Not nationalism, which is simply a distortion of humanity.

When the question is looked at from this point of view – “What is British art?” “Oh god don’t be so depressing.” “Hang on it’s not what you think, it’s full of foreigners” – then despair changes to hope. The Britishness of Peter Doig, Lucian Freud and Paula Rego, and Kitaj himself, who all come from somewhere else, is not more exciting than the Britishness of David Hockney, born in Bradford. But Hockney is exciting because he was formed so profoundly by what went on elsewhere. And not alone by Henry V’s speech the night before the battle, or love of Digestive biscuits.

Art in America, Abstract Expressionism, Pop Art, Hyper-Realism and Photo Realism, and Colour Field painting, all American, made Hockney “Hockney.” He was the recipient along with Kitaj of painter Carel Weight’s discerning praise when they were both Weight’s students at the Royal College in 1960. And what are Weight’s haunting cityscapes but a rethinking via unassuming places like Battersea and Wandsworth, of early 20th century Expressionism from Germany and Northern Europe?

The great and illustrious British painters in the background of my life since I was a student have been figures like Frank Auerbach, Lucian Freud and Sir Frank Bowling. They’re all British subjects but come from countries other than Britain. You’d think no one could be more through and through British than L.S. Lowry. His turbulent surfaces have their own life, they’re what his well-known imagery rides on, and they come from 19th and early 20th century European painting. From scenes of modern life by Van Gogh and Utrillo. And the dreamy symbolism of Lowry’s teacher, French born painter, Adolphe Valette.

The painting in the sale of a stoned sexy Blaxploitation stereotype super macho dude, by Chris Ofili, Still Smoking, is from a series which could be argued to be a 1990s version of Hogarth. Hogarth’s Marriage a la Mode sequence satirised dilemmas and manners of the day. Ofili’s notorious elephant dung series also covered a range of modern preoccupations and questions including racial murder and the persistence of the sacred. Still Smoking comes from a subset of the series featuring this absurdly outrageous funky character. The painting looks like a felt pen graffiti with a few embellishments.

Then these become more and more visually insistent, strikingly rhythmic, with the rhythms multiplying and changing. It’s easy to forget the work even has imagery, then the character, who Ofili called 'Captain Shit', pops back into consciousness again. It’s certainly a great testimony to creativity that’s young, urban and black. As if a laughing demon swallowed and digested all the existential questions demanded of art consisting of paint on canvas – Should it exist? Is it bourgeois? How can it ever be relevant? – and shat out a fabulous series of answers.

Britishness can mean eclecticism. This word was often used to excuse away the relative unoriginality of British art, the way its movements and heroes always seemed to follow innovations from abroad. Let’s forget that though. It has a meaning of joy in Ofili’s case, an artist whose originality is surprisingly tradition-based ultimately. Not only joy but also adoration applies in the case of the youngest figure represented in the sale. The year and place of his birth -- 1974, Bristol -- is the only biographical knowledge most people have of the artist known as Banksy. In 2017, his picture here, Red Balloon, disarmingly schematic and of humble scale, was voted “most loved” in a survey of British taste in art. Good for the Brits! 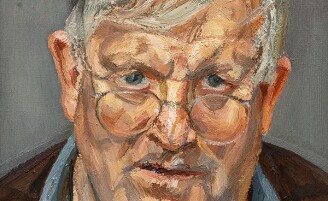