A Brief History of L.S Lowry

T owards the end of his life, the artist L.S. Lowry was visited at his home by Shelley Rohde, a would-be biographer. The meeting didn’t get off to the most promising start: with Lowry telling Rohde that he’d given up painting for good, as he was too old. She took this claim at face value, until she realised there was a canvas in the room that was still wet.

Lowry’s Rare Rugby Painting is More Poignant Than Ever

Lowry passed away in 1976, aged 88. Rohde’s biography – authorised by his estate – was published three years later, under the title A Private View of L.S. Lowry.

It told the story of an idiosyncratic man who’d had had a troubled relationship with his mother (he was an only child, and Mrs Lowry seems to have blamed him for her failed career as a concert pianist).
The artist never married or had children, and many commentators over the years have suggested that a solitary existence affected the pictures he painted. Lowry himself said that "had I not been lonely, none of my work would have happened. I should not have … seen the way I saw things".

Lowry is best known for his busy urban scenes, set in industrial parts of northern England. They’re filled with looming mills, smoking chimneys, terraced houses and redbrick factories; as well as tiny stylised figures, widely referred to as ‘matchstick men’, going about their business, often on their way to or from work.

"had I not been lonely, none of my work would have happened. I should not have … seen the way I saw things"

The scenes tend to be depicted from a certain distance – and from a slightly elevated perspective. This creates a sense of detachment consistent with the artist’s character. Lowry spent most of his life living and working in industrial areas around Manchester. However, he didn’t set foot in a factory or mill. His day-job, until he took retirement in his sixties, was as a rent collector. The people who appear in his paintings were the people Lowry met on his rounds.

He was only ever an artist in his spare time – albeit one who disdained the label of ‘Sunday painter’. Lowry painted most days after work, late into the night, and insisted "I'm a Sunday painter who paints every day of the week!" Quite understandably, given his rent-collecting commitments, artistic success didn’t come instantly. However, following his first solo show – in 1939, aged 51, at London’s Alex Reid & Lefevre gallery, then one of the most prestigious spaces in Mayfair – several honours came his way.

These included being named an official artist at the Queen’s Coronation in 1953; being the subject of a BBC documentary in 1957; and being named a member of the Royal Academy of Arts in 1962. (Lowry was even offered a knighthood in 1968, but turned it down).

Where Joseph Wright of Derby had captured the buzz of invention and progress at the start of the industrial revolution, Lowry fixed his sights on the human cost that long-term industrialisation had had by the 20th Century. His ‘matchstick men’ have been occasionally been criticised for looking a bit similar and lacking individuality – but that is perhaps precisely the point. These figures capture the factory worker’s monotonous, regimented, slightly dehumanising existence.

In the autumn of 1976, a few months after Lowry’s death, the Royal Academy of Arts in London held a large exhibition of his work: It would become that institution’s most visited show ever by a 20th Century artist.
If that gives a sense of the popular appeal that Lowry’s work has always had, it’s worth noting too the resistance that there has been towards him from certain parts of the art establishment.

This seems largely to have stemmed from the fact that he was a part-time painter; and from the resulting belief that he was insufficiently trained and painted naïvely.

The late art critic, Brian Sewell, once described Lowry as "inept, tedious, repetitive, lacklustre and stuck in a rut". But by contrast, Tate gallery (home to the national collection of British art from 1500 onwards) who own some 23 of his works, challenged this criticism with a major exhibition called Lowry and the Painting of Modern Life at Tate Britain. This argued for the artist’s debt to French painters of the late-19th century, specifically their determination to depict the realities of the emerging modern city, however unlovely those unrealities might be.

Lowry was actually taught by one of the French Impressionists, Adolphe Valette, during a decade of study (in the evenings, between 1905 and 1915) at Manchester's Municipal College of Art. In later life, he said ‘I just cannot over-estimate [Valette's] effect on me.’

As for the criticism that Lowry was repetitive, this is more than a little unjustified. One need only look at the enigmatic portraits he began painting in the mid-1930s; as well as the seascapes and rural landscapes he did in the late-1940s, 1950s and 1960s. Some of the seascapes are so empty as to border on abstraction, consisting simply of an expanse of water, an expanse of sky, and a horizon line in between. These are about as far removed as one can imagine from Lowry’s bustling, city scenes.

It is, admittedly, the latter for which he’s best remembered, though. And with the passing of time, these scenes have taken on added significance. Most of the industrial buildings in Lowry’s pictures have now disappeared – including the construction that first inspired him to paint in such a vein, the Acme Spinning Company Mill in Pendlebury (which was demolished in 1984).

Lowry’s urban imagery has come to offer a source of nostalgia for a hard-working, industrial England that no longer exists. 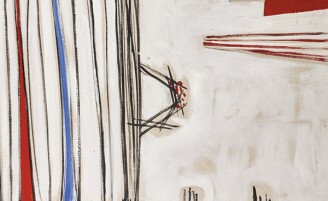