The Bathers at San Niccolò

Painted with Passignano’s renowned rapidity and bravura, beautiful in its surface qualities, the picture combines close observation of reality with an idealizing vision of friendship and possibly love. Proudly signed and dated 1600 in the center foreground, it is exceptional among Passignano’s works, which consisted largely of a conventional blend of religious and historical subjects and portraiture. Nothing is known of its origins, although in his seventeeth-century book of biographical notices on artists Filippo Baldinucci mentions a painting belonging to the Marchese Filippo Niccolini in Florence with a number of women bathing in the Arno that has tentatively been associated with the Bathers at San Niccolò. Wrong gender, but close in subject and site; unless Filippo was very nearsighted or only had a glimpse of a painting vaguely recalled, it might have been a pendant, adding mystery to mystery. The painting’s scale – also remarkable for a genre scene that is hardly generic – proves that it was a significant commission and an important one for the original owner who must have been a Florentine with fond associations of summer days at San Niccolò, which is recognizably portrayed.

Therapeutic baths and spas were popular retreats throughout Europe. They were recommended in medical tracts and were also places for political intrigue, playing games, and amorous amusements. Illustrations of thermal bathing can be found in fourteenth-century manuscripts and were published in prints from the mid-fifteenth century onwards, most famously in two woodcuts by Albrecht Dürer, one of a women’s bath and the other of a men’s, dated to around 1496. While both of Dürer’s images include one corpulent and aged figure (true to the fact that people of all ages and conditions took the waters), the others are all attractive physical specimens, suggesting the sensuous pleasures available in being naked and in seeing naked or nearly naked bodies. That titillating aspect is emphasized by the soliciting outward look of a young woman at the center of the woman’s bath and the suggestive placement of a phallic spigot with a cockerel tap in front of the crotch of a mature man who leans on the water pump in the men’s bath. That print, with its abundant sexual cues, has been interpreted as both homosocial and homosexual.

The bathers at San Niccolò get in and of the water, diving, splashing about, playing water games, resolutely chugging ahead, and lounging on the riverbank. A building in the left middleground seems to be a formal bath house with towels hanging from the windows, a small pool, and visitors on the stairs. But the scene is dominated by casual swimmers. San Niccolò was a spot for such sport, which was one that was linked to homosexual encounters as well as healthy relaxation in the Renaissance. Love between men is given prominence in the foreground couple where a young man standing in the river is locked in ardent gaze with his partner seated on discarded (and very fine) clothes on the bank. Their hands nearly touch. The sitting man points upwards, perhaps to where they might go.

Eros had an established place in bath-based iconography, but the epic precedent for a bathing scene was a cartoon by Michelangelo depicting an episode from a war between Pisa and Florence. Made for a fresco for the Council Hall of Florence between 1504 and 1508, it showed soldiers who had been cooling themselves in the river suddenly called to battle. Famous and influential even after its destruction, the cartoon was widely copied and imitated. What singles out Passignano’s painting is that it gives Michelangesque grandeur to the mundane while lacking any reference to what had become an obvious source for groups of nude men near water but for the fact of courting admiration for their bodies. 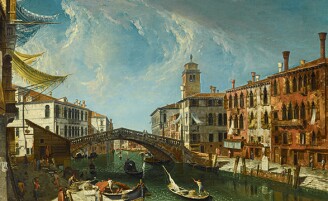