F or more than fifty years, the House of Graff has represented some of the world’s rarest gemstones. Charismatic and visionary founder Laurence Graff’s extraordinary success rests on his innate understanding of diamonds and his insistence on perfectly proportioned cuts, optimizing the brilliance, color and overall quality of every stone he handles. 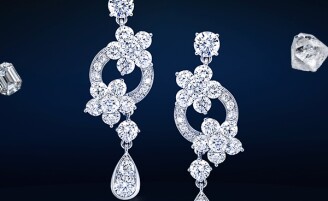 Sotheby’s is pleased to present Graff Jewels: Light & Form, open from 25 August until 1 September, a capsule collection celebrating the very best of Graff by drawing parallels with art, specifically through light and form. To celebrate these spectacular jewels, Sotheby’s looks at the art of diamond cutting – the process of sculpting a rough diamond and transforming it into a polished jewel.

Early on Laurence realised that the supply of diamonds of the right quality – Graff quality – was crucial to growth, and that he needed to be in control of that supply as much as he possibly could. As he sees it, “If you want diamonds, you have to get as close to them as you can.”

“Laurence Graff has an innate ability to see into the heart of a stone and to connect with its possibilities – a rapport that enables him to understand the individual character of a diamond, to see the subtlest nuances of light, fire and colour. Perhaps he taps into the energy of a gemstone; or perhaps it is some sixth sense of his.”

With a single glimpse at any sculptural masterpiece such as Michelangelo’s “Pieta” or Rodin’s “The Kiss“, the observer is instantly left astonished by the raw power of form and emotion these magnificent figures impart. Through a slow and deliberate process, these master sculptors unlocked the inner beauty of the stone, slowly releasing a dimensional form and ultimately liberating the form from within a single block of material. Just as these artists painstakingly studied their dimensional canvases to craft dynamic forms, so too do diamond cutters as they cleave away sections of the diamond and then polish it to reveal its inner brilliance and innate value.

Perhaps not often associated with the art of sculpting, diamond cutters are highly skilled sculptors in their own right. Through years of experience, a scholarly understanding of diamonds, patience and concentrated precision, these artisans have given us the most dazzling gems in existence. Just as sculpting techniques had been mastered by the Neolithic era, specifically in the form of jade carvings, diamond cutting dates back to hundreds of years ago. In 1375 the first guild of diamond cutters and polishers was established in Nuremberg, Germany. Called the Diamantaire, the guild developed various types of “cuts”: the shape and the quality of cut within the diamond.

The first major development in diamond cutting came in the latter half of the 14th century with the creation of the “Point Cut”. This cut follows the natural shape of an octahedral rough diamond crystal, eliminating waste during the cutting process. This art has evolved greatly over the past several hundred years. With the use of advanced technology, diamonds cut today are an art of precision.

There are several factors that must be analysed during the planning stages of cutting. A foremost consideration is how to cut the stone to maximise its value. Both the popularity of certain shapes among consumers as well as physical factors such as the shape of the rough stone, location of inclusions and flaws determine shape. Scanning devices and 3-dimensional models are used to find an optimal way to cut the stone.

Typically, round and square brilliant cuts are preferred when the crystal is an octahedron, as often two stones may be cut from one crystal. Oddly shaped crystals, such as macles are more likely to be cut in as a fancy cut. Secondly, weight retention analysis must be assessed to find the best combination of the finished stone and how it relates to per carat value. Even with modern techniques, cutting and polishing a diamond always results in dramatic weight loss, about 50%. Finally, colour retention is studied in the rough as it will influence the colour grade of the diamond, either increasing or decreasing its value.

Once the diamond is assessed and the cutter commits to a blueprint, the first step is to cleave or saw the rough into separate pieces to be completed as separate gems. Bruting is the process where a diamond cuts a diamond; two diamonds are set onto spinning axels turning in opposite directions, which are set to grind against each other to shape each diamond into its intended shape. Once the diamond begins taking shape, the cutter then polishes the diamond, cutting facets onto the diamond whereby unlocking its inner brilliance. Finally, the diamond is cleaned using acids, followed by a thorough examination process to grade its cut, colour, clarity and carat weight.

Today, diamond cutting is concentrated in a few cities around the world. From diamond trading centers such as Antwerp and Tel Aviv to processing centers and finally to places like New York City where a majority of the most important diamonds in the world are cut, these cities hold the artisans that unlock a diamond’s inner beauty; a beauty that has evoked emotion from all who have admired these stones for thousands of years.

Today, Graff Diamonds is totally independent. The company’s assets range from a share in a mine in Lesotho through to Safdico, the state-of-the-art cutting and polishing facility, to Graff ’s London-based headquarters, with its design studio and workshops, and the stores around the world in which Graff ’s fabulous wares are displayed. The House, therefore, is vertically integrated, meaning that to a remarkable degree it can control quality and production throughout the many stages required to produce outstanding jewelry. In other words, Graff controls its own destiny.