G atiss is the co-creator and executive producer of Sherlock, the sensational television series from the BBC; and fans of the series will recognize him from his remarkable performance in the role of Mycroft Holmes, Sherlock’s brother – a character that was first introduced by Conan Doyle in the tale “The Adventure of the Greek Interpreter.”

Doyle’s original manuscript of “The Adventure of the Greek Interpreter” is a highlight of Sotheby’s Fine Books and Manuscripts, including Property from the Eric C. Caren Collection auction.

Since premiering in 2010, Sherlock has won nine Emmys and twelve BAFTAS across its four three-part series.

Here, we sit down with Gatiss to discuss what the story means to him personally – and to the Sherlock Holmes collection at large. 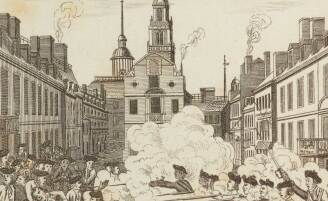 
A formative piece of literature can often occupy a prominent place in one’s memory. Do you remember when you were introduced to the Sherlock Holmes stories?

I was aware of Sherlock Holmes from a very early age. I think my first exposure was probably the Basil Rathbone/Nigel Bruce film of ‘The Hound of the Baskervilles’ which was on TV as part of a late-night horror double bill! But I finally started reading the stories when I was ten or eleven and contracted German Measles. I was bought ’the Adventures’ as a treat in a purple spine volume (the plum, I liked to think, of Holmes’s dressing gown) and never looked back. I still have that copy with an introduction by Eric Ambler. And they’re still my favorite set of stories.


We are thrilled to be offering Doyle’s original manuscript for the “The Adventure of the Greek Interpreter,” in which Mycroft Holmes is introduced. Do you recall your first impressions of Mycroft, and have these changed, particularly after developing the character for Sherlock?

Conan Doyle, of course, knew what he was doing and I’m sure every reader of ‘The Greek Interpreter’ must have had the same reaction to the brilliantly restrained line: “One day, to my very great surprise, he began to talk to me about his brother.” I think I got goosebumps. There’s another one? And even more clever than Sherlock? It’s a superb piece of chutzpah from Doyle, as is making him as different to our hero as possible. When we came to do ‘Sherlock’ we were hugely influenced by the Billy Wilder/I.A. L. Diamond masterpiece ‘The Private Life of Sherlock Holmes’ which featured Christopher Lee as a svelte Mycroft. Wilder and Diamond had run with Doyle’s idea that Mycroft was the British Government but made the Diogenes Club a slightly sinister branch of the Foreign Office. Mycroft is the ultimate Establishment insider, desperate to get his wayward younger brother under control. We ran with that spikier version of the brothers’ relationship.


Sherlock has garnered international acclaim, and seamlessly moves very 19th-century prose and sensibilities into the 21st-century. Did you always see the Sherlock stories as fundamentally modern? What was the adaptation process like?

Well, we were frustrated by the ‘fog’ which had adhered to the stories after a hundred and twenty years or so and wanted to restore them to their original feel. Readers in 1888 very much felt like Holmes and Watson could be living in their London and we wanted to recapture that. It’s essentially a sort of unlikely buddy/flat-share comedy/melodrama! And fun. Lots of fun. We didn't want to treat Sherlock Holmes as a monolith because his blessed creator never did! There were some things which moved seamlessly over to the present day. An army doctor wounded in Afghanistan was suddenly a very modern thing again. He finds a flatmate through an old friend, but the flatmate has some very odd habits. And so, he’s suddenly sucked into a world of crime and adventure. Sherlock’s pipe became nicotine patches. His “brain attic” became a mind palace etc.


Much is made in the original text, and adaptations alike, of Mycroft’s genius being greater than that of Sherlock’s. Would you agree with this? Also, why, in your estimation, is this an important distinction to make?

Holmes says it’s not false modesty, it’s just a plain statement of fact! But Mycroft is simply too lazy to pursue his theories to their conclusions. In ‘A Study in Scarlet,’ Doyle has Sherlock saying that he usually solves cases without leaving the flat. This isn’t really sustainable so what he does is give that trait to Mycroft and changes Sherlock into a man of action who is constantly leaving the flat! We thought very much of Niles and Frasier Crane in our version. Frasier was a supporting character in ‘Cheers’ but once he had his own show, they needed a sort of uber-Frasier. You need a sort of uber-Sherlock too but they're never as much fun as the one who gets his hands dirty because they know all the answers!


In general, both here, and in Sherlock, the dynamic between the Holmes brothers remains a complex one. How do you interpret this? And, relatedly, how do you feel the introduction of Mycroft shifts the narrative potential (if it does) of the Sherlock stories?

I don’t think it shifts the narrative potential. It’s just an occasional bit of fun. Doyle – ever-inventive and quickly bored – was looking for novelty in his creation. In the ‘Memoirs’ he does Sherlock's first case. He likes it so much; he does his second case! And then he introduces his cleverer brother. He’s constantly looking for a new spin. When Mycroft returns in ‘The Bruce-Partington Plans,’ he makes him into this vast, controlling brain, pulling the strings behind every Government department. Still inventing! It was this Mandelsonian trait that we expanded on too. The power behind the throne.

An area of the 19th century that remains endlessly fascinating is the rapid development and advancement of various scientific processes, and the idea of “gentlemen scientist,” so to speak. This is really the era in which forensic science and the figure of the professional detective are born. Could you speak about your impressions of this and the challenges you may have faced in making these themes feel just as exciting and novel to modern audiences as they did to their 19th-century counterparts?

The biggest stumbling block in updating the stories was that Holmes had essentially invented forensic science whereas now we are very much aware that the police do that as an everyday thing. But by keeping Holmes (or Sherlock as we knew we had to call him. No-one refers to their pals by their surnames anymore!) the cleverest person in the room, we kept him special. The one who can see around corners. The one who can outsmart everyone. He’s special. So, he doesn't have to wear a paper suit at a crime scene (not cool) and can still tell from the discovery of a dead man on the Thames foreshore that a stolen Vermeer painting is a fake! It would be folly to bog down Sherlock with DNA tests etc. We can see that anywhere. But make his brain and his powers unique and he’s still – and forever – the world’s greatest detective.