It's Satire, It's Subversion… It's Superman!

By Sotheby's
Since Superman first appeared in comics in 1938, he has captivated audiences across generations. He became the model for superheroes in the golden age of comics, and in recent years, artists have looked to this archetype to reexamine conventional ideas of power and masculinity. Focusing on the iconic Man of Tomorrow, two works by I Nyoman Masriadi and Ronald Ventura will feature in the upcoming Modern and Contemporary Southeast Asian Art Evening Sale .

S uperman has become a cultural Rorschach test — a symbol of American power, the embodiment of a masculine ideal, a beacon of hope and justice, an agent of cultural imperialism, or a corny relic from a bygone era. He was conceived as a mythic savior, invented during the lead-up to World War II, and reflected the distinct cultural wish-fulfillment and political anxieties of Americans of that generation. Over the ages, Superman’s story evolved with the changing times. His reach extended far beyond the borders of Metropolis to the wider world.

He's appeared on television, radio, movies and video games. The above still image of Christopher Reeve as Superman (featured on Sotheby's Original Film Posters Online Sale) is instantly recognizable even for those who haven't seen the 1978 Richard Donner film. The impact of Superman on popular culture is undeniable. He has become a universal, a cultural shorthand for virtue and masculinity. And yet, in Asia, Superman may be seen in a slightly different light.

Solar Wind Effect is an unflinching masterpiece by I Nyoman Masriadi depicting none other than the Man of Steel himself. Superman readies for battle—fists clenched, gaze steely, muscles bulging. His presentation is entirely incongruous with his surroundings. Amid wan stars and above the barren surface of the moon, there's no real threat in sight. What’s Superman doing? This cannot be mistaken for adulation, as the depiction of masculinity is so exaggerated that it makes our beloved superhero appear ludicrous. His cape is manspreading its way across the canvas. The lackluster backdrop of space seems to stand in rebuke of Superman’s garish red and blue getup, acknowledging our superhero’s virility but also emphasizing his plight as a lonely outcast.

Considered in some circles as a superhero in his own right, Masriadi is an artist possessed of a fervent curiosity and taste for the grotesque. He frequently explores figural representations of masculinity with a unique brushstroke technique. Reminiscent of caricature, there is nothing subtle about his outlandish illustrations of the male physique. Masriadi subverts notions of ideal masculinity by lampooning pop culture’s preoccupation with physical perfection.

Another star of the contemporary art world, Manila-born Ronald Ventura also takes on the iconic superhero in the work Super than Superman, which presents the subject in surreal fantasy underpinned by comic elements. Ventura typically chooses to maintain dense compositions in his larger scale works with no distinct hierarchy. Super than Superman is divided into two opposing planes of reality, tattooing the bare-chested Man of Steel with a comic scene.

In an impressive display of intellectual bravura, Ventura toys with notions of power and strength. The hyperrealistic muscle-bound hero appears to be flexing an enormous bicep, and is with his hands literally making an empty gesture of strength. It is worth considering that the figure is stripped bare of the iconic costume and “S” shield, and is thus unbranded. Meanwhile, his diminutive counterparts depicted in comic book style are lifting cars or crashing through walls, suggesting that feats of superhuman strength must be the stuff of fantasy. Or maybe not. What about the kiss that appears to destroy the car? Something in the composition is being tickled, though it is unclear who or what. Perhaps it is a mocking subversion of Superman’s power, but Ventura leaves this ambiguous, keeping the superhero’s strength undefined and forcing viewers to question the origins of power and where it really lies.

At the heart of his subversive opus, Ventura destroys the foundations of reality and rebuilds it in fantastical, surreal form. He draws from a trove of pop culture, folk or religious imagery, and displaces them into a new context— an eclectic mix of hyperrealism with commercial characters. Masriadi has also never been one to confine artistic expression within cultural norms, and continues to offer eccentric tongue-in-cheek commentaries on modern life and society. Using Superman as a shorthand, both artists provoke viewers to reevaluate cultural notions of machismo and ideal masculinity. 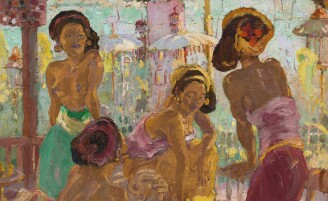