L a Mystique de L’Indochine recalls Vietnam’s Golden Age of art, which spans a fifteen-year period beginning in 1930 with the establishment of the Ecole des Beaux-Arts d’Indochine in Hanoi. The auction brings together a mélange of rich Vietnamese traditions and French allure. Owing to the country’s colonial past, foreign influences are discernible in the art, especially as many pioneers of Vietnamese modern art emigrated to France or had studied at the prestigious Ecole des Beaux-Arts d’Indochine in Hanoi before World War II. Reinterpreting and synthesizing French post-Impressionist trends, many prominent artists mastered European techniques and media to express traditional Asian subjects and ideas, thus creating a new and distinctive style. The works in La Mystique de L’Indochine showcases sentimentalized vignettes rendered with oil paint, watercolor and lacquer. Inspired by idealized themes, artists found themselves entrenched in a heartening new canon of modern art, which ultimately developed into a delightful integration of Vietnamese and French artistic styles.

The artistic movements of French 19th-century realists and impressionists, along with the works of post-impressionists, would have an outsized influence on Vietnamese modern art. The Ecole des Beaux-Arts d’Indochine, the art academy that would have a strong hand in shaping the early development of Western-style oil painting in Vietnam during the first half of the 20th century, promoted these French modernist aesthetics over other contemporaneous artistic styles, thus inspiring the pioneering young artists in their formative years who would go on to establish a new stream of modern Vietnamese art.

Some of the graduates of the Ecole des Beaux-Arts d’Indochine would move to Paris where they could study the great European modern masters. For Le Pho, the works of Pierre Bonnard revealed a new realm of light and color, igniting the artist’s passion to experiment with the iridescent qualities of natural light and rich color. Le Pho embraced French Impressionist notions of form, texture and chromatic allure, and his mid to late career paintings would often exude a golden warmth, bright light and broad brushstrokes. Similarly, the masterpieces of Pierre-Auguste Renoir, Vincent Van Gogh, Bonnard, and Henri Matisse, as well as Marc Chagall and the other members of the Ecole de Paris were sources of learning and inspiration for artists including Vu Cao Dam and Mai Trung Thu. Impressionist and post-impressionist elements – the brushwork techniques, life drawing, open-air painting and sensibilities toward color – would find their way into the works of the Vietnamese painters, often blended with multicultural artistic traditions and themes.

Impressionists and post-impressionists had also innovated on representations of the figure, departing from earlier approaches of a traditional subject matter within Western art: the nude or partially-nude figure. The radical new developments by the French painters of the mid-19th to early-20th centuries would also have a significant impact and had been a revolutionary notion when it was first introduced by the French teachers at the Ecole des Beaux-Arts d’Indochine. These stylistic innovations also ushered in a notable change in attitude toward the human form – in particular, in depictions of women. Frank, unromanticized in their everyday intimacy, the representations express values that would have been at the time been controversial or in conflict with traditional notions of modesty and morality.

Elements from the lithographic caricatures, illustrated books, and posters of 19th century French caricaturists were also consumed and adopted by Vietnamese artists, who would use humor and wit to depict modern life and stylized figures. This encouraged a sense of play, allowing artists to break from the constraints of realistic figuration and instead embrace forms that appeared simplified, graphical and exaggerated.

One of Asia's oldest artistic traditions, lacquer is an improbably medium for modern painting, as working with the material is labor intensive and expensive. The resinous material is caustic and is usually applied in multiple layers as it hardens into a highly polished, protective coating for bowls, boxes or other objects. In Vietnam, lacquer had for centuries the practical purpose of weatherproofing wooden statues and parts of temples. The 20th century marked a turning point which saw Vietnamese lacquer art rise to the height of aesthetic expression, as artist would transform the medium from functional style to poetic articulation. Training in lacquer was mandatory at the Ecole des Beaux-Arts d’Indochine, and artists with a high level of sophistication with this material experimented and reinvented a centuries-old art form, just as the impressionists in France had done with paint. The height of Vietnamese lacquer art shows a masterful synthesis of French and Vietnamese approaches to painting, depicting picturesque scenes of the landscapes, villages and families of Vietnam.

As Vietnam had been reshaped by the forces of colonialism, the pioneering modern artists of the country have balanced the duality of French and Vietnamese cultural influences, connecting artistic traditions modern and old. Many of the works of this golden age of art during the mid-20th century suggest a timeless beauty, underscored by a rich sense of nostalgia for halcyon days. 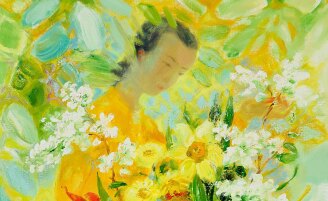