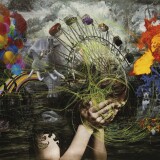 Born 1973.
Interested in selling a work by Ronald Ventura?
Request an Estimate

Works by Ronald Ventura at Sotheby's

Contemporary Filipino artist Ronald Ventura ranks among the leading figures of Southeast Asian art. His paintings and sculptures amalgamate symbols of and references to the forces and influences that have shaped Filipino history. By layering visual imagery from the United States, Spain, Japan and other occupying powers alongside that of indigenous cultures, Ventura explores the complex nature of Filipino Identity in the 21st century in both a celebration and in painful memory. His tiers of references present a complex visual language of graffiti, hyperrealism, cartoonish forms and fantasy through an accessible and sophisticated vision.

Born in Manila in 1973, Ventura completed his BFA at the University of Santo Tomas, where he continued to work as an instructor after graduating. He evolved his painting and sculpture through a highly editorial eye and a wide breadth of knowledge in Eastern and Western art history, political strife and the psychological history of his homeland. His works weave together references to Old Master paintings, Japanese prints, tattoo aesthetics and American cartoons to access a surreal cultural, national and religious Filipino identity. The young artist has received impressive accolades for his work since the late 1990s, including the 2001 Artist of the Year prize from Art Manilla and the 2005 Ateneo Art Gallery Studio Residency Grant in Sydney, Australia.

His first American solo exhibition, Metaphysics of Skin at Tyler Rollins Fine Art in 2009, garnered critical praise, as did Project: Finding Home at the Museum of Contemporary Art in Taipei in 2016. He participated in the Prague Biennale in 2009 and in the Nanjing Biennial the following year; in addition, he has had exhibitions at the Museo delle Culture in Lugano, Switzerland, the Institut Valencià d’Art Modern in Valencia, Spain and the ICA Gallery in Singapore. Ventura is the highest selling artist from Southeast Asia; his Grayground Painting sold at Sotheby’s 2011 Contemporary Southeast Asian Painting auction in Hong Kong for 8,420,000 HKD ($1,082,223).