By Sotheby's
Lee Ka-sing was a key figure in the development of Hong Kong contemporary photography during the ’80s and ’90s. From his early start writing for poetry journals and then photography magazines, he quickly became recognized for his work and then founded the Original Photograph Print Program. In an interview with Sotheby’s Gallery Director, Jonathan Wong, Lee looks back on the artistic landscape in his home city decades past, his work with mentor Yau Leung and preserving the legacy of this visionary photographer.

Jonathan Wong: Can you discuss what Hong Kong’s photography market was like 20 years ago and what led you to begin the OP Gallery?

Lee Ka-sing: Hong Kong photographers had in fact produced many exceptional images. A large major of them, lamentably, weren’t developed into photographs and in the rare cases that they were, they were altogether left to gather dust and never came to light. During the 1980s and 1990s, curators from all over the world came to Hong Kong in search of prints by local photographers. But their pursuits were fruitless. In 1995, we founded Original Photograph (OP), a project focused on producing limited edition photographs. The primary mission was to reorganize the oeuvre by our generation of photographers. We selected various artists, and from their body of work, specific photographs. The selections were representative of the artist’s style, which also provided us with a perspective for curation. Within a few years, we had published works by nearly 100 photographers. This acted as a microcosm of the modern photography landscape in the 1990s Hong Kong. Unlike today, there was not a particular market for photograph-collecting. Our project was at first established by sheer dint of interest and passion, with limited personal resources. Nonetheless, it eventually grew into something that garnered positive attention. From there, we began to organize the oeuvre of a previous generation of photographers, including Yau Leung, Ngan Chun-tung, and Mak Fung. Historically, Hong-Kongers of that generation had a general indifference toward photography, exacerbated by the lack of understanding toward the medium. As a result, images captured by the artists were gradually lost from sight as days gone by, making it more and more difficult for anyone to gather the gelatin silver photographs that were actually passed on from that era.

"All of these not only are stories of mine, but yours as well."

JW: How did you come to know the late Yau Leung? How did he influence contemporary photographers in Hong Kong?

LKS: I met Yau Leung in the 1980s. I was a columnist for his magazine Photo Art and later published an avant-garde editorial supplement in the magazine DIGI, with a focus on international artists working in digital image-making. In 1993, I had a solo exhibition at the Hong Kong Arts Centre, for which Yau published a catalogue of nearly 100 pages. For a while, we would routinely meet once or twice a week for lunch at the Paramount Chinese Restaurant in Wan Chai. These conversations led to the creation of Yau Leung’s first two individual photography catalogues: Lu Feng Stories (1992) and Growing Up in Hong Kong (1994). The two monographs also served as blueprints for our selection of photographs during our later collaboration.

"The socio-historical significance of documentary photography is unquestionable."

JW: Can you expand on your collaborative work on OP?

LKS: Approximately 100 pieces of photographic works were selected from every artist, and each work was printed in 50 or 100 editions. Be that as it may, the number merely suggests the maximum amount of editions. If we actually processed 100 prints for every single work, the amount of material we would have to consume would be unimaginable. So, the artists would process the very first edition of their selected works, while the final products belonged to the organization and could only be used for the purposes of exhibition, designing marketing material and catalogues. We avoided having to stock a large number of physical prints, while the artists wouldn’t need to consume excess resources in terms of time and material. However, there were disadvantages, as was the case when Yau Leung suddenly passed, he left virtually no photographic works of his available in the market. Even those who had already placed orders for his original prints were left with disappointment.

JW: The value of Hong Kong photography has not been fully explored. Do you agree?

LKS: Similar to that of the other forms of art, the monetary value of a photograph fluctuates along with factors, such as the artist’s career as well as historical and social changes. A photograph that was worth only $25 in New York in the 1950s may be priced as tens of thousands of times of that amount today. There were some photos that served their original purpose, remained in a family photo album for remembrance of family members. Others were highly celebrated, only later to be left in the dust as wares of a street vendor. Historical orientation in the development of Hong Kong photography, to certain extent, added value to Yau’s photographic works. In the ’90s Hong Kong the market for photography was virtually absent. The positive response garnered by the work of Yau Leung and his fellow photographers can largely be attributed to 1997— a historical year. People who were about to depart from the city or be confronted by an entirely new set of circumstances would purchase a print to mark the past. With the sudden passing of Yau Leung, his original prints were no longer available. That was the same year my entire family migrated to Toronto. Gradually, Ngan Chun-tung and Mak Fung passed away, too. Later, I held multiple exhibitions in my gallery in Toronto of Ngan’s and Mak’s works, but they were purely for exhibiting but not selling. I consider their remaining works as a memento of my friendship with them. Moreover, I hoped to share their past and legacy with the fellow photography-lovers in this foreign land.

JW: What are your wishes for this exhibition?

LKS: Before the light of this era dims and fades completely, before traditional materials such as fiber-based silver gelatin print are replaced by digital printing, the relatively complete set of photographs ought to be preserved or exhibited by museums and other institutions in Hong Kong. Yet, none of these institutions had contacted us after all these years. We closed our gallery in Toronto permanently, and decided to devote our attention to organizing the relics—including the photography publications we released in the 1990s, the prints by our contemporaries and the previous generation of photographers. Then Sotheby’s reached us to discuss the possibility of hosting an exhibition for the collection. After a series of discussions, the consensus was to host two exhibitions to showcase the limited-edition photographs of the 1960s and 70s by Yau in the first round, and in the second show exhibit the more photographs around and preceding the turbulent year of 1997. Together, they will no doubt be a touchstone that celebrates the development of Hong Kong photography in the 1990s. 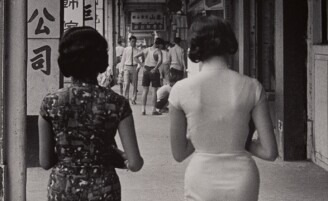