Reaching For the Moon: Reimaging the Death of a Legendary Poet

“He has many names… By the time of his death, he had become known as a great poet and was called 'zhexian,' or Banished Immortal, by his admirers. Such a moniker implies that he had been sent down to earth as punishment for his misbehavior in heaven.”

- Ha Jin, 'The Banished Immortal: A Life of Li Bai'

According to legend, the great Tang dynasty Li Bai (701-762) drowned while embracing the moon’s reflection on the Yangtze River. It is not by coincidence the poet was also known as jiuxian, wine immortal, for he took great joy in drinking and he indulged to excess. Sure enough, Li Bai had been deep in his cups that fateful night when he jumped from his boat into the river in pursuit of the lunar light.

The apocryphal story has a certain appeal because of the way the moon figures so prominently in Li Bai’s poetry. It was an idea particularly cherished by the poet. In his musings, he would look into the light of the night sky and see a distant but constant landscape. Pure and serene, the moon had associations with a home that had always been faraway, a reminder of the poet’s solitary wanderings and state of exile.

The manner of Li Bai’s death has a more romantic imagining than what might appear to be just an unfortunate accident. Given the poet's legend, it seems fitting that the end of his earthly life occurred just at the moment he reached for the moon. The Banished Immortal’s moonlit death is imagined not with tragic finality but as part of a watery transfiguration, which released the poet from his mortal body and returned him to his divine state.

To commemorate the legendary poet, those who came after Li Bai – poets and scholars – all look to the lunar reflections on the water or watch the tide at night during Mid-Autumn when the moon is at its brightest and fullest. Those who are familiar with Li Bai's story would recognise these themes illustrated on both sides of this carved celadon jade screen from the Qianlong period.

Although jade screens depicting scholarly subjects were popular during the Qing dynasty, no comparable example of similar design seems to be recorded. A smaller rectangular jade screen of the Qianlong period, depicting the scholar Zhou Dunyi admiring summer lotuses, was sold at Sotheby’s Hong Kong in 2017. Another white jade screen decorated with moonlit waterscape formerly in the Art Institute of Chicago gifted by Samuel M. and Matilda Nickerson, was sold in our New York rooms in 2019. For a later example, a smaller rectangular jade screen with scholars observing the tides attributed to the late Qing dynasty was sold at Christie's Hong Kong in 1995. 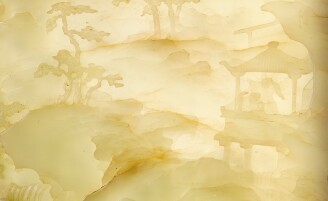