Portrait Busts from Baroque to Neoclassical

R ome played a vital role in the expansion of Baroque sculpture, and this is especially noticeable in the multitude of commissions by its religious leaders.

Pope Clement XII, the commissioner of the Trevi fountain in Rome, was certainly one of the most depicted subjects at the time. The bust in this sale can be compared with the Bust of Pope Benedict XIII in Palazzo Venezia and another version in marble of Pope Clement XII in the Galleria Borghese in Rome. After several attributions and re-attributions, this bronze bust is thought to have been created as one of a commemorative pair, with the bust of his predecessor, Benedict XIII, and can therefore be attributed to Giardini.

The Baroque papal portrait of Gregory XIII (remembered for the creation of the Gregorian calendar) demonstrates how celebratory busts were still of great relevance during the late 17th century. It is attributed to Milanese sculptor Carlo Francesco Mellone, who trained under Camillo Rusconi, author of the funerary monument for Pope Gregory XII in St. Peter’s Church in Rome.

Mellone was responsible for carving the relief on the funerary urn, and the great affinity in portraiture and details (such as the beard and the vest), between the relief in Rome and the present marble, suggests that the bust was probably executed around the same time.

Exemplary of a renewed interest in classicism and antiquities, are the marble busts by British sculptor Joseph Nollekens. Nollekens, after a tormented childhood, managed to travel to Italy in the second half of the 18th century, where he was educated by Italian sculptor Bartolomeo Cavaceppi. After his first successes, King George III (his patron) provided him with important commissions along with a conspicuous amount of money. Nollekens became the British portrait sculptor of his day, and this sale will offer an impressive collection of busts dating from the sculptor’s artistic maturity.

Included in the collection, are the busts of some of the best-known figures of the Regency period, such as the Duke of York (second son of George III), the Earl of Burlington (well known for Burlington House and the Burlington Arcade) and William Pitt the Younger, the famous Prime Minister of Britain during the Napoleonic Wars. Nollekens’ busts of William Pitt were particularly popular and in demand, and he therefore sculpted one-hundred and fifty copies of them.

Ironically, Pitt and Nollekens fell out over a eulogy Pitt didn’t want to supply for a celebratory monument, and Pitt refused to sit for the sculptor. Consequently, the marble bust is actually derived from the prime minister’s death mask.

Joseph Nollekens remains the pre-eminent British portrait sculptor of the 18th century, with his bust being a part of some of the UK’s most important private and public collections. With no heirs, Nollekens left his entire fortune to his assistants and friends. The sale of this collection provides collectors with the opportunity to acquire several important historical portrait busts. 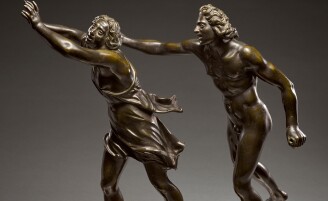