Getting to Know Picasso Ceramics

By Sotheby's
As an array of inspired Picasso ceramics come to auction in Picasso Prints & Ceramics, open through 23 November, we look at the enduring appeal of these charming objects, the creation of which captivated Picasso in the later years of his career.

F rom graphic plates to elegant vases and bird-shaped pitchers, this sale represents an exceptional variety of works produced over several decades by Picasso, in collaboration with the Madoura Pottery. The artist's time in the South of France had a profound effect on his creative ambitions, and his newly discovered passion for pottery was central to his practice from 1946 until his death in 1973.

Picasso became increasingly interested in working with clay in his later years, as it was less demanding than painting, to which he devoted great physical energy. Making ceramics allowed him to work on a smaller scale, but this gentler pace did not mean he slowed his rate of production, however; Picasso produced over 3,500 ceramic works, combining elements of his different practices, fusing painting, printmaking and sculpture. The majority were editions made in the workshop at Madoura, but there were also some unique pieces that he carved in to with tools, and other items painted by hand.

On a visit to Vallauris in the summer of 1946, Picasso met Georges and Suzanne Ramié, the owners of the Madoura pottery studio. This was the start of a friendship and creative partnership with the Ramiés that would last until Picasso’s death. The Ramiés introduced him to various techniques, and together with the artist's distinctive style, they were able to produce editions of the objects Picasso created. It was at Madoura that Picasso met his second wife, Jacqueline Roque, who was working in the pottery.

Picasso drew on many sources for his ceramic designs, but animal and human faces were a common theme that he explored in many variations. Inspired by everything from owls and goats to Greek mythology and bullfighting, Picasso's fascinations were clear to see, whether carved, etched or painted and glazed on to the surface of the clay. 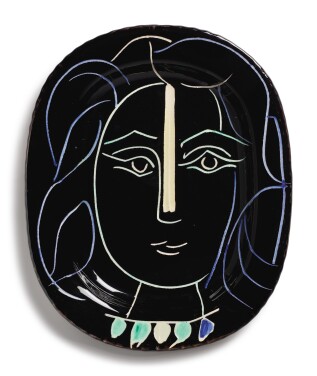 As one of the most significant artists in history, Picasso created many of the 20th century's most enduring and poignant images. Despite this, it is hard to ignore the more playful and whimsical nature of his ceramics. This could take the form of a pitcher in the shape of a fish decorated with a huge grin and cartoonish eyes, or a vase transformed into an owl with a mischievous expression. It has been noted that these works were made during a happier and more optimistic time in the artist’s life, after the dark years of the war. 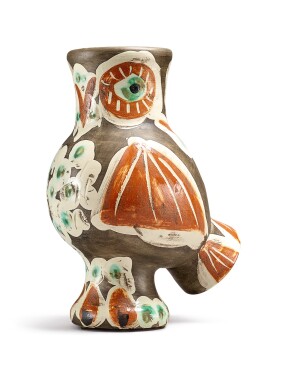 Picasso's muses were a driving force throughout his career, and during his years of producing pottery, the image of his second wife, Jacqueline Roque, appeared in several pieces. An elegant portrait of woman's face carved in to wet clay; a contoured vase mimicking the female form. Jacqueline was the inspiration behind several hundred works by her husband, until his death in 1973. Despite his devotion to his wife and muse, it was not only Jacqueline that Picasso liked to depict in clay; he painted a likeness of his daschund, Lump, on a plate, on the day the dog was given to him by his friend David Douglas Duncan. 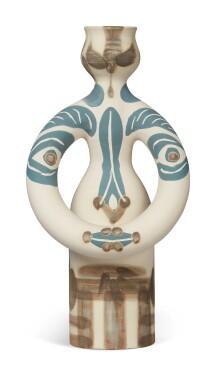 Picasso began making these objects with the intention of making them functional. In fact, the bowls, plates and pitchers he designed were used in his own home, and gifted to friends. Whilst working with the Madoura Pottery, Picasso was keen that these editions were available for anyone to buy. He was, at the time, commanding large sums for his paintings and sculptures, and ceramics represented a more democratic way to serve each end of the market — bringing Picasso in to the homes of ordinary people in the post-war era of austerity.

The market for Picasso ceramics continues to grow as people from around the world seek to add to their collections. Picasso ceramics are a particularly attractive investment as there are so many different variations on his inimitable style — this auction perfectly demonstrates that there is a motif and object for every taste. 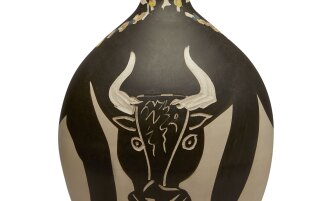