I t is always a privilege to assess a personal collection such as this one – presented in the Doha / Paris, un Décor Princier sale – with such a distinguished provenance and where cultures are blended so finely.

From an early age, His Highness Sheikh Hamad Bin Abdullah Al Thani developed a passion for works of art from the 18th and 19th centuries.

“I am still reading. I am learning every day. I never say that I’ve learned – I am still learning.”

With a connoisseur’s eye for detail, His Highness assembled a collection for his personal pleasure and his home. The present ensemble reflects the tastes he developed during the first chapter of his journey as a collector.

One feels that the objects were often chosen not only for their intrinsic beauty and artistic merit, but also to create an interior which is grand and warm at the same time. Each piece seems integrated in a setting that is both stately and intimate.

At the heart of the collection is a group of furniture which reveals His Highness’s fondness for the great French ébénistes: Oeben, RVLC, Dautriche, Saunier and Foliot. His choice, however, does not solely revolve around one theme, period, or geography. The works of art come from many places such as France, England, Russia, Italy, the Middle East and Asia.

“I am a voracious collector in many different areas […] it is in my blood. It is a passion – what can I do? Do you have a cure?"

Qajar helmets can be juxtaposed with Empire furniture and terracotta pieces inspired by antiquity. The polychromy of Oriental lacquers respond to the lustre of Russian enamels and European porcelains.

Opulence and refinement are the pillars of the collection, as the lovely acquisitions by mainly British goldsmiths from the 19th century also testify. Moving with grace and ease between countries, eras and historical references, the collection reveals the refinement of a tastemaker universally recognised for his insatiable curiosity and inimitable grandeur. 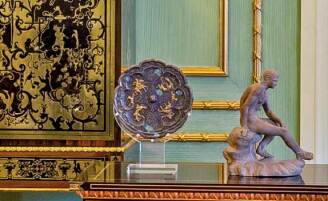