Ottoman Apparel: How to Wear One’s Daggers with Flair

By Christian House
Y ou need confidence to carry off an Ottoman hat. As an album of costume from the late 18th/early 19th century illustrates, Turkish statesmen, officers, politicians and courtiers punctuated their attire with unfeasibly structured headwear.

There are bulbous turbans the size of pumpkins, towering embroidered servant’s hats and the back-sleeved keches of the Jannissaries, the elite Ottoman infantry. Beneath these we discover an array of mintans, kusaks, gomleks, yeleks and entari – or vests, sashes, chemises, jackets and robes. Vibrant stripes and patterns are glimpsed beneath bold flowing kaftans. And there was a particular fondness for billowing bloomers – called salvars.

This exceptionally rare album of 124 watercolour and gouache works on paper is attributed to Fenerci Mehmed. Little is known about Mehmed except that his first name refers to his past as a lantern maker (the Turkish for lantern is fener) and that Sultan Abdulaziz admired his work. Only three other costume albums by the artist are known to exist: one in the Topkapi Palace, another in the Istanbul University Library and the third in the Rahmi Koç Collection.

This album – the largest of the four – was likely to have been created for a visiting diplomat as a kind of Rough Guide to the envoys, officers and dignitaries that they might encounter on their professional and social rounds. There are three distinct kinds of subject: Ottoman military, staff at the Topkapi Palace and assorted political movers and shakers. There is just one woman – a scantily clad courtesan.

As cataloguer Chiara De Nicolais suggests: “It is plausible that this impressive album was purchased by a member of the diplomatic entourage in Ottoman Turkey at the end of the 19th century which was later acquired by an Ambassador to Iran at the beginning of the 20th century.”

The album is accompanied by a typed list of the characters on each sheet; written in French it poses the question of whether the volume was compiled/bound for a French diplomat. The list, probably from the early 20th century, delivers a cast of unusual suspects. There is a wonderful specificity to the job titles: Chief of the Doors; Water Distributor; and, naturally, Chief of the Ceremonial Costumes.

I particularly like the head coffee waiter, with his tray of cups and nonchalant expression. The faces tend to fit into three types: bearded and business-like; moustachioed and rakish; and hoary and patrician.

The key colours of Ottoman dress were cobalt blue, scarlet red and emerald green. There are also occasional glints of gold – often on grand horse tack (one distinguished looking charger is painted sans rider). There are soldiers dressed for parade and decked out in mufti, servants at the ready and musicians with their instruments (even military horns came with tassles).

There is little in the way of backdrop to the compositions. It is the threads that are really on show here: their bright palette, lush cloth, sharp cuts, boundless regalia and flourishes of flexible tailoring. After all, it was de rigeur that one’s belt could comfortably accommodate three daggers. 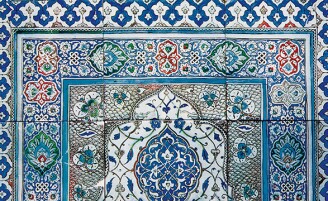