C ontroversial, groundbreaking and innovative, Carlos Cruz-Diez is one of the radical artists of post-war modern art. Why controversial and why such a radical? Cruz-Diez chose to dedicate the entirety of his artistic career, which now spans over 60 years, to one of the most complex and problematic subjects in the history of post-war modernism: the concept behind color.1 His contribution to the still on-going dialogue on this topic is equal to those of his peers Yves Klein, Barnett Newman, Donald Judd, and even more recently James Turrell. The premise proposed by Cruz-Diez in the 1950s is the belief that color is in fact a living organism capable of endless mutations and possibilities of metamorphosis. The challenge that Cruz-Diez imposed upon himself was one that few artists had attempted before, “to liberate color from the two-dimensional plane” and transform it into a constantly changing “physical experience”.2

In the upcoming 22 November auction of Latin America: Contemporary Art, Cruz-Diez’s historic 1961 Physichromies (Baroque) will be offered. Only the second work from this early period to ever appear to auction, Physhichromie (Baroque) is one of the artists’ greatest achievements within his grande experiment. Not quite a painting, not exactly a sculpture, but more so an object, how should we experience it? Here are a few facts to consider when looking at this work:

Trained as a traditional, classic painter at the Escuela de Artes Plásticas y Artes Aplicadas in Caracas, Cruz-Diez’s fascination with color began during this rather formal, early stage. The figurative still lifes and landscapes painted in the 1940s eventually progressed, taking on more abstract-geometric considerations. By the mid-1950s, he abandoned the canvas, turned away from the traditional formalist philosophies of art-creating, and began his experiment with building abstract relief-like constructions out of plywood, casein paint (a form of acrylic paint) and modulated cardboard strips. In 1959, he created the first of his assemblages, known as Physichromies (more on what these are in a moment).

In 1959 Scientific American magazine published Edward H. Land’s (the future co-founder of the Polariod Company) article “Experiments in Color Vision.” Land offered a simple, lingering question in the opening sentence: “From childhood onward we enjoy the richness of color in the world around us, fascinated by the question: “How do we see color?”3 One of the most progressive experimental studies on the human optics of color vision, his experiments were focused on projections of red and green filters that in-turn produced the full color spectrum. Land’s suggestion was a bit upsetting to the conventional scientific establishment at the time: since the 19th century it was believed that we needed red, blue and green to see the full color spectrum; Land suggested that we really only need red and green. His proposal would have a major influence on Cruz-Diez’s own artistic investigations. It can perhaps even be said that the artist was applying and advancing Land’s theory via his Physichromies—the first of which, Physichromie 1, was constructed out of red and green cardboard strips.

What exactly does Physichromie mean? A product of the combined words “physical” and “chromatic, it is simply defined by Cruz-Diez as meaning a “light trap” that can capture and change color and causes an emotional response by the viewer.4 The Physichromie is Cruz-Diez’s challenge to traditional painting and concepts of color: unlike painting which captures a specific moment in time, these works are intended to express a reality of the present moment and our “in-real-time” encounter with the work. More importantly, the Physhichromie requires that we, the viewers, do not behave like passive on-lookers but instead as active, participants with the work. It is a pretty theatrical experience. In this case with Physichromie (Baroque), when we move from right to left and from left to right we see a blanket of red interjected with surprises of green and cascades of white. These are not just singular color moments though, they make themselves known as waves offering a variety of tones of reds, greens and whites.

CARLOS CRUZ-DIEZ IN HIS HOME AND STUDIO, PARIS, FRANCE, 1964.

Carlos Cruz-Diez arrived in France in 1960. Europe at the time was a hot bed of innovative and anti-traditional approaches to art – Art Informel, Art Brut, Group ZERO, the GRAVE group, Arte Povera, Kineticism, and Op-Art were all emerging across the continent. There was a spirit of collaboration amongst this network of artists with the ultimate goal of making art for the senses. Art was becoming an event—no longer just something to look at and contemplate, it was transforming into a communal, active experience. In this complete break with traditional production, artists such as Alberto Burri, Lucio Fontana, Antonio Tàpies, amongst others, were employing spontaneous and irrational methodology and using uncommon, new media: plastic, found objects, everyday materials like cardboard, motors and aluminum. Finding himself in this particular moment, Cruz-Diez stated in a recent October 2016 interview with Axel Stein, Director of the Latin American Art Department, about Physichromie (Baroque), “I felt tempted to create works with a double discourse, mixing the static with the dynamic…I thought that by contrast, the idea of color appearing and disappearing in space would be more evident” in this particular case. 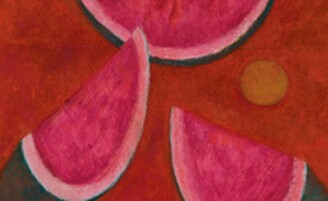