Nicolas Poussin's Powerful, Intimate Depiction of The Baptism of Christ

Poussin’s correspondence with Paul Fréart de Chantelou, which lasted from that year until his death, allows us to follow this picture from its commission in May 1645, through numerous stages and delays in its execution, to its completion over three years later. The painting was not actually begun until March 1648, just after Poussin had finished his series of the Seven Sacraments for Paul Fréart de Chantelou and was finally despatched to his patron in Le Mans in September of the same year.

It is one of only a very small number of pictures that Poussin ever painted on panel; his choice of a cypress wood support was most unusual but allows us to identify it with certainty with the ‘petite table de cyprès’ mentioned in a letter from the painter to his patron’s brother Paul in June of that year. The small format was specifically requested by Jean Fréart de Chambray, and at least part of the delay in its completion was due to Poussin’s adjustment to this new and (for him) unfamiliar format and support. The Baptism was a subject close to Poussin’s heart, and here he has succeeded in distilling the spiritual drama of the great Sacraments canvases into a small and highly personal work of great intensity.

Saint John the Baptist falls to his knees as he sees a vision of God in Heaven appearing at the very moment of the act of baptism, whose significance and importance is captured by the moving expression upon Christ’s face while he stands naked in the waters of the river Jordan. God the Father, arms outstretched, has strong echoes of the divine figure borne by angels in Raphael’s small Vision of Ezekiel, now at the Palazzo Pitti, Florence, a composition that the artist knew well from a version owned by Chantelou.

As Pierre Rosenberg and other scholars have noted, this painting is particularly well documented in Poussin’s own correspondence with both Jean and Paul Fréart de Chantelou. The first mention of the painting is in a letter of 15 May from Poussin to Jean, in which he mentions a commission for "a small picture on wood of the same size as the St. Paul done for your brother" This indicates that Jean Fréart de Chantelou was asking for a small panel of a similar format to the Ecstasy of Saint Paul that Poussin had painted for his brother Paul between August and December 1643 as a pendant to his painting of The Vision of Ezekiel, then attributed to Raphael himself, which he had recently acquired in Bologna. 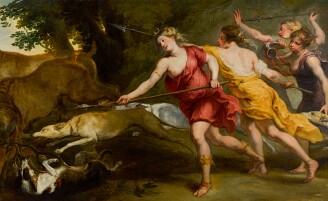 This was also on a small panel, measuring 41.5 by 30 cm, and is today preserved in the Ringling Museum of Art in Sarasota, Florida. In a subsequent letter of 20 August to his brother Paul the subject of the commission is specified as ‘un petit batesme de St. Jan’ (‘a small baptism of Saint John’), and Poussin expresses his unease with the format: "I confess I cannot refuse him anything but as I have sworn never to do anything so small (such small work offends my sight) and as it seems impossible to serve him as quickly as he would wish I appeal to you to act as mediator…"

The choice of subject was no doubt an allusion to the Christian name of Poussin’s patron. In October the same year Poussin wrote again to Jean Fréart de Chantelou, apologising for the lack of progress, which he blamed on the small format and the pressure of time, for he was at that moment "totally taken up by the work I am doing for your brother", namely the great series of canvases of the Seven Sacraments today in the National Gallery of Scotland in Edinburgh. Poussin had begun his second set of canvases on this theme – without doubt the greatest and most central achievement of his art – for Paul Fréart de Chantelou in 1644, and would not complete them until 1648.

Perhaps unsurprisingly, the pressure of that commission did not allow Poussin time for this smaller work. Although on the 2 February 1646 he was able to write to his patron in April and again in July he was obliged to admit that to his brother that "I have not yet begun the little picture for your brother M. de Chantelou".

Finally, in a letter dated 22 June 1648, Poussin wrote to Paul Fréart de Chantelou to tell him that he had begun the picture: "I have begun the small painting for your brother and I shall try to finish it this summer." It is surely no coincidence that the last of the Sacraments, that of Marriage, was completed on 23 March, and Poussin was now free to pursue other commissions and designs. In a letter of 13 September, he was able to write to Jean Fréart de Chantelou to inform him that the finished work had been sent to his brother, with a final plea for mitigation on account of his poor eyesight and a little stiffness in his hands.

There can be little doubt that Poussin, who was far more accustomed to working on canvas and on a much larger scale, was probably uncomfortable with his patron’s choice of size and medium. Nevertheless, this was not the last time that he would paint religious subjects in such a format.

The introduction in the smaller panel of the figure of God in the sky above, seems to be, as Rosenberg notes, a variation on a figure used by Poussin for his large altarpiece of The Miracle of Saint Francis Xavier painted in 1641 for the chapel of the Jesuit Novitiate in Paris and today in the Musée du Louvre. The subject of the Baptism of Christ seems to have held a particular interest for Poussin, for alongside that of the Holy Family, it is the one of the subjects he most frequently returned to throughout his career.

The Baptism of Christ forms part of a sequence of treatments of the theme, earlier examples of which include the Baptism that formed part of the first series of the Sacraments painted for Cassiano del Pozzo and completed in 1642 (now in the collection of the National gallery of Art, Washington) and two canvases from the mid-1630s in the Musée du Louvre in Paris and the J. Paul Getty Museum. Poussin would return again to the subject of the Baptism of Christ on a larger scale in two later canvases from the mid-1650s.

Notwithstanding the pressures Poussin had been under, the year 1648 seems to have been a particularly fertile one for him, one from which some eleven certain paintings are recorded, amongst which were some of his most memorable works. Works from this year described by Félibien, included, for example, the Eliezer and Rebecca painted for the banker Pointel and today in the Louvre, and the Holy Family on the staircase painted for Nicolas Hennequin, Baron d’Equevilly and now in the Cleveland Museum of Art.

The reason for this burst of creativity may be due precisely to the fact that many of these works were landscapes, which being then considered a more minor genre, would probably have required less time and care than Poussin’s religious or classical subjects, over which he might sometimes labour for a day on a single head. It is quite possible also that some of these works may already have been begun by Poussin in earlier years, and which he was only now able to complete.

Despite all these difficulties, it seems that Jean Fréart de Chambray was well pleased with the final result. In a letter of 19 December 1648, Poussin thanks his patron for "the esteem" which he accorded this "small work" and adds in a modest personal and philosophical note invoking the French philosopher Michel de Montaigne (1533–1592) that: "I have dedicated it to you only in the spirit of Michel de Montaigne, not as the finished article, but as the best I was able to do..." 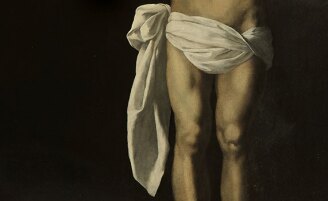