T he term 'Neo Tantra' was coined by Dr. L. P. Sihare to describe the work of artists who acknowledged the sacred geometry of Tantra as an inspiration for their visual language. Neo Tantrism emerged in the 1960s with the work of K. C.S. Paniker (1911- 1977) and his series 'Words and Symbols,' in which the artist incorporated astrological elements, calligraphic forms inspired by Tamil script and two-dimensional tantric diagrams to expound the concept of unity through imagery related to mantras or cosmic vibrations and sounds. Although the term did not categorize a movement, it did serve to define a loose affiliation of key artistic protagonists from the 1960s, 70s and 80s who mined the vast iconographic lexicon of Tantra. The visual borrowings afforded a universality of form and a conceptual framework for abstraction, even while the ideology remained authentic and rooted in Indian tradition.

Neo Tantric Art was seen as a unique and powerful counterpoint, not only to the preponderance of figuration in Indian art but also to a dominant American Abstraction. Equally important, it reflects Sihare’s ambitions to celebrate and situate the work of these Indian artists within the broader international context of contemporary abstraction.

Neo Tantric Art was seen as a unique and powerful counterpoint, not only to the preponderance of figuration in Indian art but also to a dominant American Abstraction.

There were easily discernible parallels between the abstractions of Paul Klee, Piet Mondrian, Constantin Brâncuși and Robert Delaunay and Tantric Art. And these links were not limited to early 20th century artists: the post-war American painters Ad Reinhardt, Mark Rothko, Barnett Newman, Robert Rauschenberg and Jasper Johns have referred to their indebtedness to the universal and timeless aesthetic of Tantric Art.

The mystic doctrines and religious traditions of Tantra not only influenced, but also transcended the different esoteric schools and sects of conservative Hinduism, Buddhism and Jainism. In addition, Tantra’s blurred and porous boundaries encompassed a wide variety of non-Vedic scriptures and elucidated topics as diverse as statecraft, yogic practices, cosmology and metaphysics. Facilitating a present-day cultural embrace is Tantra’s emphasis on gender egalitarianism and equal weightage on the physical as well as spiritual methodologies for attaining transcendent wisdom. The American and European reception of Neo Tantric Art was inextricably entangled with the exotic and esoteric appeal of Tantra which resonated with the zeitgeist of sexual liberation and mysticism, as well as a growing interest in Eastern spiritualism and finds a deeper resonance in present more multiculturally open times.

The Western reception of Neo Tantric Art was inextricably entangled with the exotic and esoteric appeal of Tantra, which resonated with the zeitgeist of sexual liberation and mysticism.

The offerings in this sale focus a spotlight on some of the key figures and crucial concepts of Neo Tantric Art. Concerned with the union of the male (purusha) and female (prakriti), the evolution of Biren De’s work (lot 7) was motivated by his years of spiritual and conceptual exploration. Color as well as light play a crucial role in his paintings, even though the juxtaposition of complementary oppositions is defined through the use of curvilinear line and geometrical shapes.

In contrast, G. R. Santosh’s works (lots 5 -6) invariably display a vestigial figuration, even as they are imbued with specific symbolic connotations, mystic moods and the delicate exploration of ethereal space. Like De’s, Santosh’s works are also suffused with colors inspired by a deeply personal and spiritual vision. Santosh’s primary concern is to illuminate issues of unity between the macrocosm and microcosm Although there is an obvious visual reference to anthropomorphic forms they are not deliberate renderings of human beings, rather they should be seen as evocative responses to an inner transformation.

Mahirwan Mamtani’s vision (lot 8) emanates from a center from which a rhythmic arrangement of forms, integrated color and tonal values move outwards, imbuing his works with a potent and mystical vision. 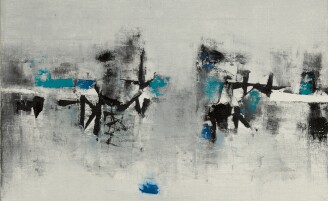 Of all the Neo Tantric artists, P.T. Reddy (lot 9) alone was confident enough to re-articulate pre-existing Tantric forms to create a uniquely individual visual idiom. In Concept of the Sun, male energy is described through the incorporation of several Sree yantras which typically describe the stridently feminine aspect and evidence Reddy’s experiments with the concepts and iconography of Tantra. The work encapsulates the physical and spiritual properties of the Sun, through geometry whilst emphasising the centrality of concept through the complexities of colour, shape and conjoined forms.


Perhaps the only artist who has been an unwavering adherent to the concepts as well as visual imagery of Tantra is Acharya Vyakul (lot 10). Throughout his practice, Vyakul has adopted and adapted tantric symbols, with greater emphasis on the notion of ritual thus affording viewers an immersive and renewed experience of themes, forms and motifs.