C laude Monet’s Meules, the most glorious and effusive work from the artist’s famed Haystacks series, sold Tuesday at Sotheby's Impressionist & Modern Art Evening Sale for an astonishing $110,747,000. The winning bid shatters the previous record for the highest sum ever paid for a work by Monet, signaling the enduring value and popularity of the French Impressionist master; the bid is also the record for any Impressionist work of art.

The unique perspective, dynamic composition, and vibrant paint palette sets Meules apart, even in a series as celebrated as Haystacks. Strong diagonal lines (one from the rightward-facing perspective, the other from slanted beams of sunlight) meet at the center of the work, grounding the layers of elaborate brushstrokes and guiding the viewer's gaze across the canvas. The result is a captivating landscape that emanates a sense of profound harmony and well-being.

Beyond a record-setting bid, the sale of Meules marks a pivotal moment in the artwork’s history: this is the first time the work had come to auction since 1986. But Tuesday's sale garnered a price more than 44 times higher than the work's previous record. In just eight minutes, six bidders fought fervently for the masterpiece. 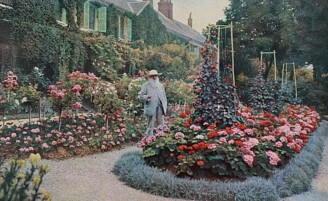 Meules was first acquired by Bertha Honoré Palmer in 1892. As the wife of wealthy Chicago businessman Potter Palmer, Mrs. Palmer had the means to invest liberally in great artworks.

After experiencing Haystacks at Monet’s monumental 1891 exhibition in Paris, Mrs. Palmer was captivated – a year later, she acquired the work from Monet's dealer, Paul Durand-Ruel. Though she soon resold the painting to the Paris museum, by November of 1892 she changed her mind a final time. Meules, along with eight other works from Monet’s Haystacks series, returned with her to the United States. Over the course of her lifetime, Mrs. Palmer remained an enthusiastic admirer of Monet’s series paintings; in addition to the Haystacks, she owned four of the Poplars, three of the Rouen Cathedral, and three works from the morning on the Seine series.

In the years since, Mrs. Palmer’s remarkable collection of 19th century Impressionist artwork has passed down through the Palmer family, finally becoming part of her son and daughter-in-law, Honoré & Grace Palmer’s, collection after her death. Today marks another historic changing of the guards.