A ccording to ancient Greek myth, Medusa was one of the three Gorgons. Feared as a deadly monster, her hair consisted of writhing snakes, and she would turn to stone every man who gazed into her eyes. Medusa’s reign of terror ended when the hero Perseus tricked her - with the help of the gods - by using a mirrored shield to avoid gazing at her, and beheaded her. Perseus continued to use Medusa’s severed head as a potent weapon before conceding it to the goddess Athena, who attached it to her shield.

Though she was sometimes depicted as a woman in classical art, it was the head of Medusa that became a powerful iconography. Her image was ubiquitous in antiquity - from marble sculpture to cameos and mosaics - and was rediscovered in the Renaissance. Artistic responses to the myth in the Baroque were particularly inventive, playing on the potency of her weapon while revealing a desire to defeat it. Gianlorenzo Bernini sculpted a marble bust of the living Medusa as a conceit - the monster who would turn men into stone was made of stone herself. The sculptor’s ingenuity was such that his Medusa does not seem to meet the viewer’s gaze from any angle, thereby rendering her impotent.

Bernini’s Roman contemporary, Caravaggio, painted Medusa as a profusely bleeding severed head. She is alive in death, her terrifying eyes seemingly searching for a victim, and snakes still writhing in defiance of her demise. Mimicking the appearance of Medusa’s head on Athena’s shield, Caravaggio painted his violently realistic depiction on a circular board of wood, to satisfy his patron’s desire for a commemorative shield.

With his Medusenschild, first conceived in 1885, the painter Arnold Böcklin developed this idea in a Symbolist mode. Best known for his enigmatic painting, The Isle of the Dead, Böcklin turned to sculpture late in his career, compelled by the possibilities of colouring three-dimensional works. Using the shape of an actual shield, surmounted by Medusa’s head in high relief, he conjured an illusion that plays on the fear and attraction provoked by her apotropaic image. Medusa’s death is made both realistic and symbolic in this mask-like rendering, whose wide-eyed stare is simultaneously abhorrent and mesmerising. Her frozen, terrified expression ironically recalls the plight of Medusa’s victims, who were rendered immobile by being turned to stone.

Arnold Böcklin | Medusenschild (Shield with the Head of Medusa)

While the myth of Medusa continued to pervade art and thought in the 20th century, her status as a monster was gradually softened. Within feminist discourse she became a symbol of female rage, in response to the traditionally male obsession with vanquishing her power. The ancient Roman re-telling of the Medusa myth by the poet Ovid gave rise to a school of thought that saw Medusa as a sympathetic victim rather than a monster.

In Ovid’s Metamorphoses, she is a beautiful young woman, who is seduced by the god Poseidon in Athena’s temple. As a punishment for this transgression, Medusa is transformed into her monstrous appearance. It is this version of the story that inspired one of the most recent responses to the myth in the arts, the ballet Medusa (2019) by the contemporary choreographer Sidi Larbi Cherkaoui. Here Medusa turns into an involuntary man-slayer as a result of her unjust treatment by the gods. Her ultimate beheading through Perseus is interpreted not as a defeat but a release. Medusa allows herself to be vanquished. 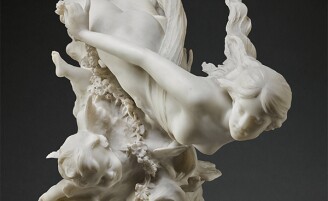