Kashmir Sapphires – The Brightest of Blue

Among the highlights of the upcoming Magnificent Jewels and Noble Jewels sale (Geneva, 15 May) are a number of exquisite Kashmir sapphires. Since their discovery in the late 19th century, Kashmir sapphires have acquired an almost legendary status. This is due to both their unique colour and texture, and their extreme rarity.

Deposits of Kashmir sapphires were first discovered and mined in the early 1880s following a landslide in a remote valley in the Kashmir region of India. Hearing of these sapphires, brighter than any previously discovered, the Maharaja of Kashmir purchased the mine and work began in earnest. The mine was only active for a short period of time, operating for just five years between 1882 and 1887, when the supply of sapphires was depleted.

A new mine was later opened and periodic mining has been carried out in the intervening years but with far less success than before. This means that the vast majority of Kashmir sapphires on the market today were mined in the short lifetime of the original mine. This limited production has resulted in only a small fraction of the world’s total sapphire supply originating from Kashmir, and they are therefore by far the rarest examples available. 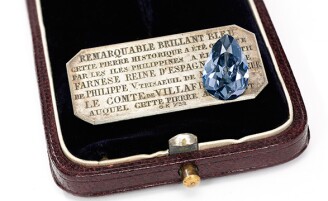