T he name "Mickey", for those born after 1925, would conjure in the mind the image of a particular mouse. Good natured. Adventurous. Simultaneously the everyman and the exception. Mickey is a true icon, figuring in our collective imaginations since childhood. It is fitting that in the 1930s, the jewellery house Cartier, another visionary creative force, teamed up with Disney, to celebrate its most beloved animated characters of all time. Sotheby's A Brilliant Menagerie (22 July – 5 August), presents these limited-edition charm bracelets, featuring Disney's preeminent cartoon mouse. Read on to discover more about the origins of Mickey Mouse and his rise to international celebrity.

From a young age Walt Disney was interested in drawing. He took art classes while still at school, and practiced tracing the cartoons found in the newspapers of his paper route. At 18 he got a job as a commercial illustrator drawing illustrations for catalogues and advertising. After he was fired from this job, he borrowed a book on animation and a camera and began a lifelong experimentation with animation.

In 1923 the “Disney Brothers Cartoon Studio” was formed by brothers Walt and Roy. From the very beginning the studio pioneered American animation. Disney served as the training ground for the greatest animators of the day and pioneered the techniques and founding principles of the discipline. The Disney Studios were, for example, the first to introduce the “storyboard”.

In 1928 Walt began work on character called Mortimer Mouse. By November of that year, the mouse, newly named Mickey starred in Steamboat Willie. The animated short was released to huge acclaim. Not only was this the first appearance of Mickey Mouse, but it was also the first cartoon film to have a fully synchronized soundtrack. It had been only a year earlier that the first sound film, The Jazz Singer, had been released. On January 13 1930 the first comic strip devoted to Mickey Mouse appeared and later in that same year the first Mickey Mouse book was published.

In the years following Mickey’s debut, as the Disney Studios grew, they routinely produced and were most well-known for their Silly Symphonies. This series of animated shorts quickly became the platform in which the artists at the studio were allowed to experiment with processes and techniques. The corresponding published comic strips were often where Disney and his animators presented and tested new characters. (Silly Symphonies also serves as the inspiration in name, format and animation for Looney Tunes.) Mickey himself changed over time, from the "pie" design of the character's eyes which feature a white triangle cut out of a black circle before 1933, to afterward when the eye design changed.

In the summer of 1934 Disney announced that he would produce the studio's first feature length film. Rumours and trouble surrounding Snow White resulted in production being dubbed derisively as “Disney’s Folly”. Walt mortgaged his own house to help finance the feature. Considerable training and development went into the production of the film, and because of this the Disney Studios expanded with animators, teachers, and artists from all fields.

In 1937 Snow White premiered at the Carthay Circle Theatre. It received an immediate standing ovation at its completion. The review in the New York Times ran with the title “Thank you very much, Mr. Disney” and six days after the premier Walt Disney and his seven dwarfs appeared on the cover of Time. Fifteen years after the creation of his studio Disney had changed the film industry, elevating animation to the big leagues. The third animated feature film was Fantasia, which was released in 1940 and was the first commercial film to be shown in stereophonic sound.

In 1939, Disney was awarded an honorary Oscar for the film for “a significant screen innovation which has charmed millions and pioneered a great new entertainment field”. In 1989 it was selected for preservation by the Library of Congress.

In the years following, Disney quickly established itself as the leader of American animation. The core group of animators at this time were known fondly as “Disney’s Nine Old Men”. Together they were the driving artistic forces behind Snow White, Bambi, Sleeping Beauty, 101 Dalmatians, Peter Pan, Cinderella, Pinocchio, The Jungle Book, Alice in Wonderland, Lady and the Tramp, and more. They refined the 12 basic principles of animation and created a legacy so enormous that the majority of current American animators can directly trace their legacy to one of these nine men.

Over 50 feature films later, Disney is a multinational media and entertainment conglomerate. On October 27 1954 Walt Disney mused on a television program, “I only hope that we never lose sight of one thing – that it all started with a mouse”. 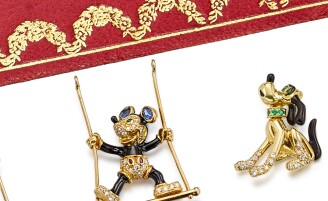