Inviting the Touch‎: Jades of the Hongshan Culture

I n China, as elsewhere, the Neolithic (the New Stone Age) refers to a period when the hunters and gatherers of the Palaeolithic (the Old Stone Age) turned sedentary and began to cultivate crops and domesticate animals. While man created tools as well as animal and human figurines in stone, bone and wood since Mesolithic times, in several regions of China, a particularly difficult to work but also particularly beautiful stone – jade – was in the Neolithic shaped into hallowed, ceremonial, dignifying, symbolic and decorative items, which caused some scholars to call for the declaration of a Jade jade.

"A particularly difficult to work but also particularly beautiful stone – jade – was in the Neolithic shaped into hallowed, ceremonial, dignifying, symbolic and decorative items, which caused some scholars to call for the declaration of a Jade jade"

The Neolithic in China coincides with the Holocene Climatic Optimum, where a wetter and warmer climate improved living conditions and brought about the beginnings of agriculture and animal husbandry. One of the most advanced regions in this respect was in the northeast of China between the Liao and the Amur (Chinese: Heilongjiang) Rivers, where the cultivation of millet can be documented from around the sixth millennium BC onwards. This region was also on the forefront of jade working, with the raw material probably available in form of pebbles in local river beds.

A tentative chronology of this region at present attributes the Xinglongwa culture to c. 6200–5400 BC, Zhaobaogou, to c. 5400–4500 BC, Hongshan to c. 4500–3000 BC, and Lower Xiajiadian to c. 2200–1600 BC and thus to the beginning of the Bronze Age. While Hongshan craftsmen were not the earliest to fashion jade, it was the Hongshan culture that turned jade working into a high art, coming up with an immense variety of shapes and designs, for which no direct prior models can be traced, refining their workmanship to a level that even today can only amaze us, and in doing so, developing their own, very distinctive style.

Hongshan flourished in an area today shared by Inner Mongolia, Liaoning and Hebei. In graves, Hongshan jades were usually placed close to the body of the deceased and clearly were a rare and precious commodity that indicated status. They are generally pierced with holes for suspension or for attachment to textiles or some other material and probably represented personal ornaments. They were not only interred, however, but also appear to have been handed down for centuries. Pieces have been excavated in much later contexts as well as in far-away locations. They were clearly well known in the Shang capital, Anyang in Henan, where about two millennia later both Hongshan jades and more naturalistic jade carvings of human figures, dragons, turtles, birds etc., which seem to have taken Hongshan jades as models, appeared in a royal tomb (Yinxu Fu Hao mu/Tomb of Lady Hao at Yinxu in Anyang, Beijing, 1980).

Hongshan jades are distinctive in style, characterized by superbly polished, very smooth, softly rounded surfaces that appeal to the haptic sense. They include both figurative and abstract items, and the features on the former and the decoration on the latter are equally indicated in a highly subtle manner, sometimes only through slight changes of the surface plane or through shallow, raised or grooved lines, that can be felt, but are often visible only at close inspection, when turning the piece in the light.

Among the most common jade items in the Neolithic are rings in any shape, be it in form of flat bi disks (Lots 75, 80, 85), joined double (Lot 88) or triple disks, chunky, round (Lot 96) or long, tubular beads. Typically, they are carved in a highly pleasing style, with no sharp edges, in a tactile finish. Hongshan bi discs are not straight-cut slices like the discs in other cultures, but slightly domed on either side, their section shaped like a willow leaf. Among the first jade items produced in China were slit rings, jue (Lot 89), believed to represent earrings. 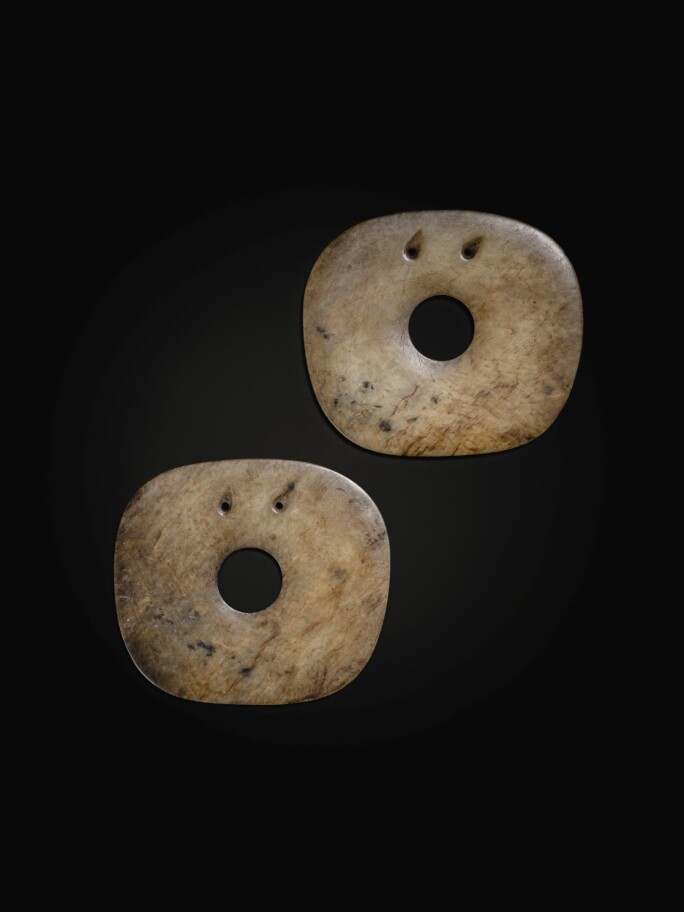 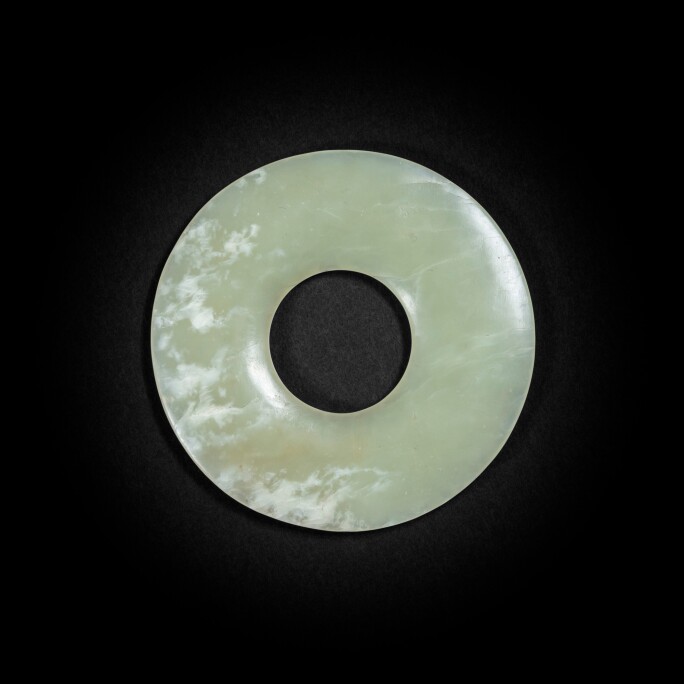 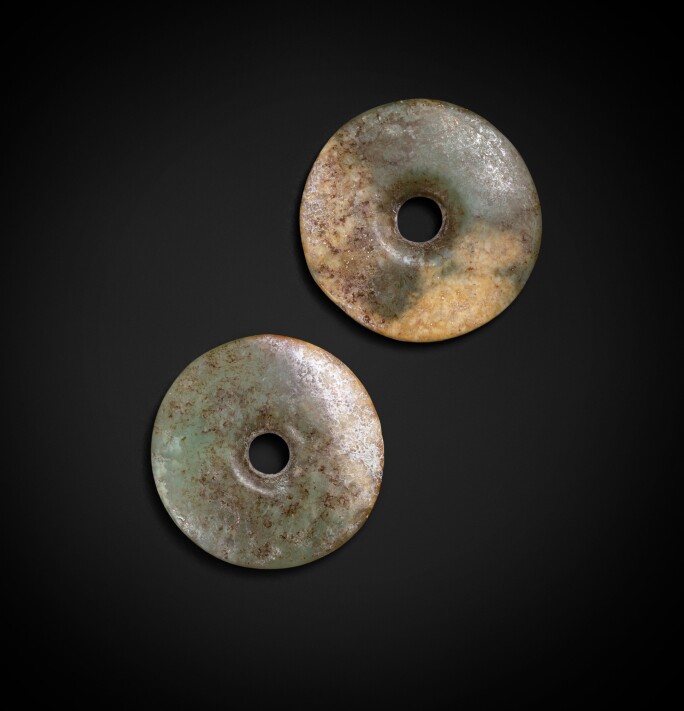 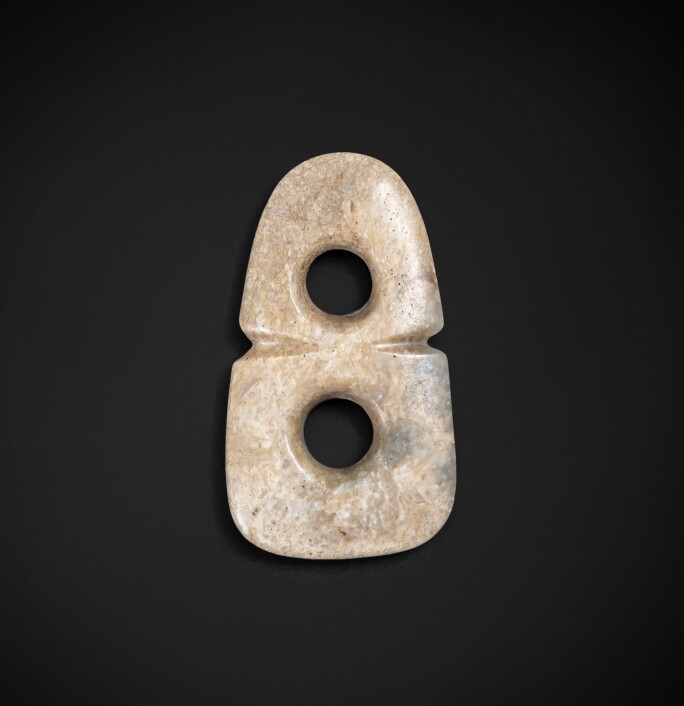 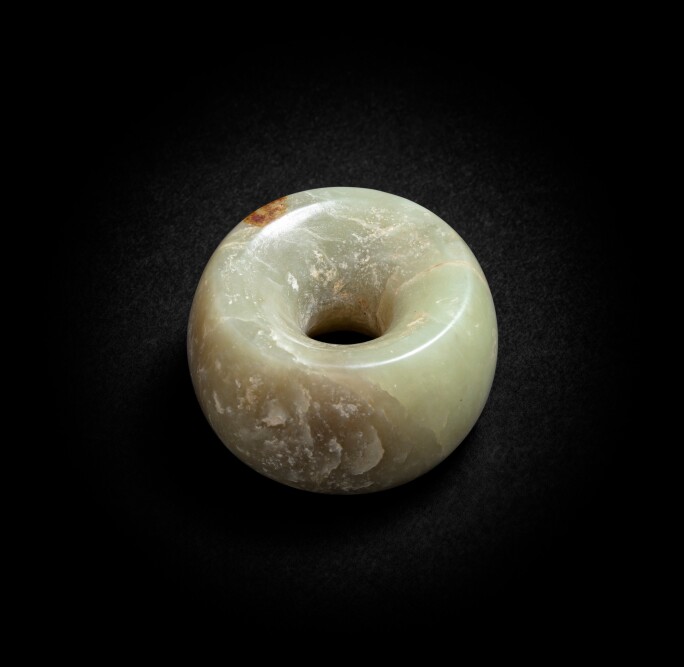 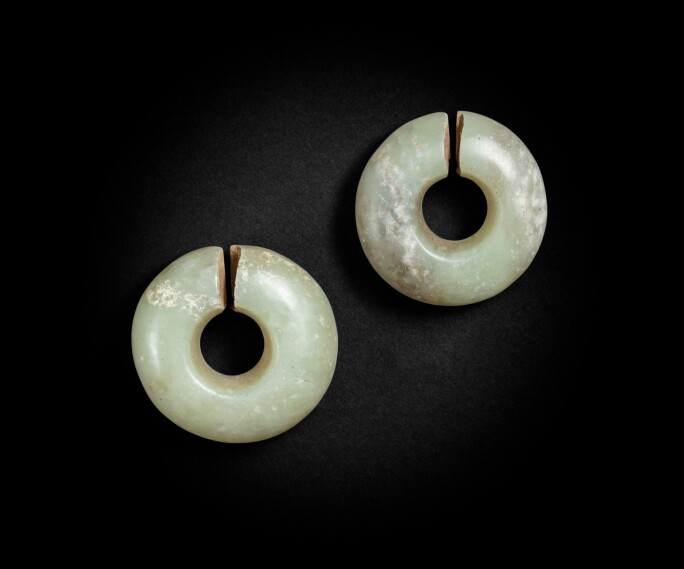 The most idiosyncratic and best-known figurative jades of the Hongshan culture may have their origin in these slit rings, but have one end carved into an imaginary animal head. Undisputed as representing dragons are oval C-shaped figures, very elegant and slender, terminating in a head with delicate features, a long snout and a curled-up mane (Lot 86). The similarity with later dragons is very obvious. The piece in this group is carved from a particularly beautiful light green stone.

A second type of ‘dragon’ is more plump, shaped in form of a thicker ring coiled around a smaller hole, with only a narrow cut separating head from tail (Lots 79, 83), which on some figures goes right through, while on others it is a V-shaped indent with the two ends remaining joined. While the overall appearance is here equally reminiscent of a dragon, their blunt, broad snouts have given rise to the term ‘pig dragon’, zhulong. The importance of the pig in Neolithic cultures has been discussed by many scholars, but they have also been interpreted as tigers and as such, the polar opposites to the C-shaped dragons. In the Shang dynasty, however, jade dragons are coiled like Hongshan pig dragons, while tigers are depicted with their body straight.

Hongshan jade dragons are among the earliest dragon representations in China, even though the pig dragon image appears to originate further northeast: a rare example, carved of ordinary stone, attributed to the late sixth millennium, has been discovered in Jilin. Hongshan craftsmen thus may not have invented the dragon image, but their exquisite jade figures made the mythical animal popular. They therefore inhabit a very special and highly important place in Chinese art.

"Hongshan jade dragons are among the earliest dragon representations in China"

A similar creative imagination as informs the pig dragons also seems to lie behind the rare depictions of humanoid beings. The piece in this collection (Lot 77) is a small plaque-shaped pendant, which closely echoes larger figures that are worked in the round. It depicts an anthropomorphous being in straight frontal view, as if seated, hands placed on legs, feet close together, the head with pointed chin, topped by an elaborate headdress which ends in two peaks. Almond-shaped eyes and triangular nose are delicately indicated.

The abstract creations of Hongshan jade workers are no less impressive than their figurative ones. What is true of Neolithic designs in many media is also apparent in Hongshan jades, namely that the abstract forms Stone Age artists invented are anything but simple. How complex and imaginative they are becomes quickly clear when trying to redraw them from memory. Curves and angles do not follow simple geometric rules and are not made up of an easy repetition of movements, but are often asymmetric and characterized by abrupt changes of direction. It is a fascinating aesthetic for which it is not easy to find modern equivalents.

"The abstract forms Stone Age artists invented are anything but simple. How complex and imaginative they are becomes quickly clear when trying to redraw them from memory"

A prime example are the cloud-shaped plaques that usually consist of a central scroll motif with hooks in four corners around it, all shaped like bands of consistent width accentuated by a central groove (Lot 82). More regular in design but sublime in its subtlety is another abstract piece, probably slightly post-dating Hongshan, of a type often called a wrist ornament (Lot 81). It consists of a rectangular plaque, curved as if echoing the shape of the narrow end of a forearm, its surface ever so slightly textured with parallel U-shaped grooves. Made some six thousand years ago, it has an uncanny feel of a contemporary piece of jewellery. 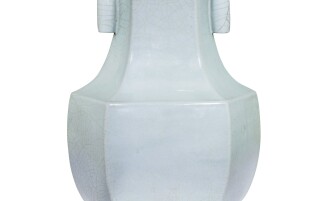 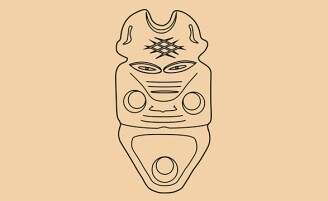