The book collector William O'Brien (1832-1899), originally from Cork, became a Q.C. in 1882 and was appointed a judge of the High Court of Justice in Ireland in 1882. In legal history he is mostly remembered for presiding over the trials in spring 1893 of those accused of the infamous Phoenix Park murders in 1882. O’Brien was close friends with the distinguished attorney-general and statesman Sir Edward Sullivan (1822-1885), the Lord Chancellor of Ireland from 1883, also from County Cork and also an avid bibliophile. Sullivan’s library, which contained several thousand volumes including a substantial collection of Aldines and fine incunables, was sold by Sotheby's in May-June 1890 in an auction of 7,063 lots. Among Sir Edward’s children were Edward (who became a designer bookbinder) and John, who converted to Catholicism and became a Jesuit. Fr. John was declared ‘Venerable’ in 2014 and was approved for beatification in 2016. It was as a result of Judge O’Brien’s friendship with Edward, and the Sullivan family’s close connection with the Jesuits, that he bequeathed his library to the Community at Milltown Park.

O'Brien's library had a similar scope to his friend's, though one suspects his budget was rather more limited. There are no Caxtons or incunabula printed on vellum, yet the collection shows knowledge of bibliographical concerns and a thoughtful selection of books. There are around 100 incunabula, predominantly from the earlier years of printing, in particular from the 1470s, and they seem to have been selected from as many different printshops as possible, some common, some uncommon, in order to demonstrate the spread of printing, in particular in the German-speaking lands, the Low Countries and Italy. There are many books from the first printshops in each town, such as Johann Mentelin, Vindelinus de Spira and Ulrich Zel.

There is also a substantial collection of Aldine imprints. There are several of the more common titles, yet also many of the later sixteenth-century imprints from other branches of the Manuzio-Torresani printing dynasty, along with some counterfeits produced in Lyon and Florence. Italian printing seems to have been of particular interest, yet there is a fair amount of early sixteenth-century French vernacular printing, as well as some Dutch and German. Early English printing appears to have been another area of interest, with many works printed in black letter, from Wynkyn de Worde to the first English edition of St Augustine in 1610. The medieval manuscripts (of which there are a small group) have little or no decoration, but are textually very interesting. Produced in France, Germany, Italy and the Netherlands, and dating from the thirteen to the fifteenth century, they are predominantly Franciscan and Dominican liturgical and theological texts. Several of them belonged to identifiable medieval religious foundations.

Enthusiasm for Shakespeare also inspired O'Brien. He owned the Second, Third and Fourth Folios, all in fine nineteenth-century bindings, as well as other early English and Continental sources known to have been used by Shakespeare, including Chaucer, Giraldo Cinthio, Hall, and Holinshed. He owned a facsimile of the First Folio, perhaps another sign of his more limited means, compared to other nineteenth-century collectors.

The largest number of books in the collection are works of English literature. Many of these are collected editions, but there are important translations of the classics, an extensive collection of plays by Dryden and his contemporaries and inscribed presentation copies of works by William Wordsworth. He seems to have had a particular interest in the Imitation of Christ, as there are numerous editions of this text. Science and philosophy are represented by a small number of key works, including very fine copies of the first editions of Bacon’s The Advancement of Learning and the Novum Organum, acquired at the Sullivan sale.

While the nineteenth-century taste for bindings is quite different from our modern aesthetic, O'Brien can still be viewed as a connoisseur of fine bindings. The bindings by Bedford, Clarke, Lewis and similar are still fine examples of their craft, though we may have preferred the "original oak boards" to have been retained. The collection includes a fair number of bindings in the Roger Payne style, as well as Harleian bindings, some elegant French red morocco and fifteenth-century bindings from known workshops such as the Charterhouse of Buxheim and Rebdorf Abbey. There is a particularly splendid binding by Pascual Carsi y Vidal, who spent time in London to learn his trade, on a copy of the Ibarra Sallust.

The period in which O'Brien purchased his library, the 1880s and 1890s, contained some of the most important sales of the century. Hamilton Palace, Syston Park, Michael Wodhull, Osterley Park, Gosford, the Sunderland Library, are all represented in the collection (see also the index of provenances). His late friend Sir Edward Sullivan, from whose sale he had bought a substantial proportion of his library, in turn had also bought from these prestigious sales, and it is quite alarming to see from Sullivan's catalogue that he paid far more for some of his books than they sold for in 1890, after his death. We can see from the catalogues that O'Brien bought mostly through the London booksellers Ridler and Rimell, as well as Stibbs; many of the books contain the booksellers' price code, and O'Brien often notes the price he paid, which in some instances varies considerably from the price paid by the bookseller at auction. There are even a few invoices from booksellers nesting in the volumes.

The books that cost O'Brien the most are somewhat surprising. Top of the list is a large paper edition of Dugdale, in eighteen volumes bound by Clarke and Bedford for the earl of Gosford, for which O'Brien paid at least £164. Second to that is the Syston Park set of the Dauphin Classics, which cost £64, and for the Second Folio he paid £32-10s. Comparison of the prices he paid with today's values is a fascinating exercise. In the volumes containing several nineteenth-century provenances, one can trace the movement in prices both up and down (with grateful thanks to Michael Wodhull).

O'Brien also accumulated a substantial number of books of Irish interest, including many fine Dublin bindings. These are not included in this sale, apart from the works by or relating to Jonathan Swift and Edmund Burke. These include Swift’s own copy of a text which probably influenced Gulliver’s Travels, and a presentation copy of Burke’s Reflections on the Revolution in France.

DUGDALE, SIR WILLIAM, MONASTICON ANGLICANUM: A HISTORY OF THE ABBIES AND OTHER MONASTERIES, HOSPITALS, FRIERIES, AND CATHEDRAL AND COLLEGIATE CHURCHES, WITH THEIR DEPENDENCIES, IN ENGLAND AND WALES... NEW EDITION. LONDON: LONGMAN, HURST, REES, ORME & BROWN [AND OTHERS], 1817-1830. ESTIMATE £5,000-8,000.

Some manuscript and early printed volumes from the O'Brien library have recently been placed on long-term deposit at the National Library of Ireland.

The collection has been housed since 1899 with minimal interference within Milltown Park library, which was established in the 1880s when the Jesuits established their schools of Philosophy and Theology. A couple of volumes that were badly wormed have been rebound, and a bequest booklabel was added to most of the volumes in the early twentienth century, and later on some Milltown Park labels were pasted onto the inside front cover of most volumes. A librarian added a small "c" to some of the title-pages to indicate books that had been catalogued, and some volumes have an ink stamp in them (though most of this does not apply to the manuscripts and incunabula). A catalogue of the incunabula was published in the 1932 (P. Grosjean & D. O'Connell, A catalogue of the incunabula in the library at Milltown Park) which includes provenance no longer visible in the book, so it is likely that the authors had access to material no longer available. It is a shame we do not have such a resource for the later books, in particular the Shakespeare folios.

In short, the O'Brien library provides us with a microcosm of the book-collecting mentality of the later nineteenth century, together with a unique opportunity to assess what was considered collectible among bibliophiles and to celebrate the taste of a man almost forgotten by history. And we are even fortunate enough to have a photograph of the man, in all his legal finery, to link to his library. 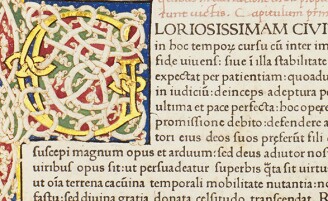 Past Auction
The Library of William O’Brien: Property of the Milltown Park Charitable Trust
7 June 2017 | 10:00 AM BST | London