Parts of the painting recall the small-scale works on copper and Masonite that Miró painted in 1935-36 (Personnages, montagnes, ciel, étoile et oiseau). However, these desert-like or volcanic landscapes inhabited by curious, oneiric forms are chaotic and filled with an oppressive intensity that is very different from the atmosphere of this piece. In Peinture (L’Air) the figures have been liberated from the oppressions of the terrestrial realm and given the freedom of the sky.

The composition offers insight into Miró’s own state of mind. He was able to write in a letter to Pierre Matisse in 1938: ‘The situation in Spain is very agonizing, but far from being desperate; we have the firm hope that some event will take place to tip the balance in our favour’ (letter to Pierre Matisse, 7th April 1938, in Margit Rowell, Joan Miró. Selected Writings and Interviews).

It could also be seen as part of his own contribution – limited by his exile in France – to the Spanish struggles. The palette is restricted to the red, yellow and blue of the Estelada – the Catalan flag of independence. They are colours that appear repeatedly during this period, notably in the design he produced in 1937 for a stamp that is now known as Aidez L’Espagne as well as other major works from this time. The idea for Peinture (L’Air) originated in 1937 with a gouache titled L’été that Miró intended as illustration for the magazine Verve, edited by E. Tériade. 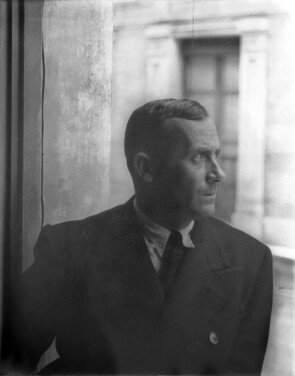 The resulting image culminated in 1938 with this work, one of the most striking paintings Miró created that year.

1938 was the year that saw the height of his engagement with political themes. He was commissioned to produce a large panel for the Spanish Pavilion at the 1937 World Fair and responded with the monumental Le Faucheur (The Reaper), known also as Catalan Peasant in Revolt which was shown alongside Picasso’s Guernica and constitutes Miró’s own, distinctive plea on behalf of his people. Over the following year his work shifts between different moods – many of the works have an ominous, anxious atmosphere whilst others seem open to the optimism that pervades Peinture (L’Air). In 1939 Miró clarified the relationship between his art and life, writing that: ‘The outer world, the world of contemporary events, always has an influence on the painter […]. If the interplay of lines and colours does not expose the inner drama of the creator, then it is nothing more than bourgeois entertainment. The forms expressed by an individual who is part of society must reveal the movement of a soul trying to escape the reality of the present, which is particularly ignoble today, in order to approach new realities, to offer other men the possibility of rising above the present’ (J. Miró, ‘Statement’, in Cahiers d’Art, Paris, April-May 1939).

Like so much of his other work, Peinture (L’Air) does not directly confront the politics of the day, instead it speaks to the artist’s own perception and emotion. In this case Miró harnesses the full powers of his distinctive artistic vision to create a work that wholly embodies what Jacques Dupin described as a ‘renunciation of despair’ in a celebration of colour and form.