By Sotheby's
At first glance, the Chinese imperial dragon robe looks just as it is named – a robe decorated with dragon designs. But there was a complex system behind its colours, designs and features that would seem indecipherable without an instruction manual. In particular, the Qing dynasty took the dragon robe to a whole new level, its vast complexity was unrivalled in the history of China. In the upcoming Chinese Art auction, a collection of Qing imperial robes are among the highlights, so we take this opportunity to briefly introduce a few features of the dragon robe.

An Unprecedentedly Complex System
The Qing court attire system was strict, complex and detailed, to a level that had exceeded all other dynasties throughout the history of China. The right to wear the dragon robe and its accessories was conferred by rank and entitlement. In 1748, Qianlong emperor (r. 1736-1795) ordered a review of court dress regulations to examine all previous Qing dress regulations and developed a comprehensive strategy for dress and the ceremonial trappings of the court. After a decade of work, the Qinding huangchao liqi tushi, (“The Regulations for the Ceremonial Paraphernalia of the [Qing] Dynasty”) was completed in 1759.

Many Shades of Power
It is common knowledge in China that yellow robes were worn by emperors. Yet in the Qing dynasty, the use of yellow became stricter than ever, and a hierarchy of shades of yellow to differentiate rank within the imperial clan was instituted. Minghuang, or bright yellow, was reserved for the emperor and the empress dowager, the empress and first rank consorts in formal occasions, while Jinhuang, or golden yellow, Xinghuang, or apricot yellow—usually a shade of orange—, Xiangse, or incense color—usually a slightly greenish yellow shade, Qiuxiangse —usually a shade of brown or plum— were worn by imperial family of various levels. Lower ranking nobles and all others wore robes with blue grounds.

Nevertheless, the emperor did also wear other colours such as blue, red and white for different worshipping ceremonies, and he would wear clothing of various colours when outside of his official duties.

Clue is in the Claws
Dragon insignia at the front and back of the robe were assigned to members of the imperial family according to their status. Dragons with five-claws called “long” were used exclusively for the robes and badges of the emperor. They outranked the five-clawed dragons called “mang”, which were identical in appearance to the long dragon and only distinguished by name. These were assigned to the emperor’s sons, imperial princes of the first rank and his sons, and imperial princes of the second rank. The four-clawed mang dragon was assigned to the emperor’s grandsons, great-grandsons, and great-great-grandsons, also to imperial princes of the third rank down to nobles of the seventh rank. Nobles of the eighth and ninth rank and below, as well as court officials did not wear dragon badges, although their longpao were invariably decorated with five-clawed “mang.”

The Twelve Ancient Symbols of Imperial Authority date back to the Zhou dynasty or before, and therefore an important symbol in Han Chinese traditions. The Qing dynasty, founded by the Manchus, an ethnic minority, had retained certain traditional features reflecting unique Manchu customs, such as a slim-fitting body, narrow sleeves, hoof-shaped cuffs, flared collars and the lavish use of animal fur. A range of conspicuously displayed accessories further stressed Manchu heritage as horse riding conquerors. Among them, a hat, a surcoat, flaring collar, necklace and the group of items suspended from a chaodai, or court belt, that included pairs of drawstring pouches and ceremonial kerchiefs, as well as a knife, a flint and a pair of chopsticks.

In a way, the Qing dragon robes embodied elements of both the Han culture (such as The Twelve Ancient Symbols of Imperial Authority) and their Manchu heritage. The study of it may offer fascinating insights into how an ethnic minority established their power in China, as they went on to become one of the most powerful dynasties China had ever seen. 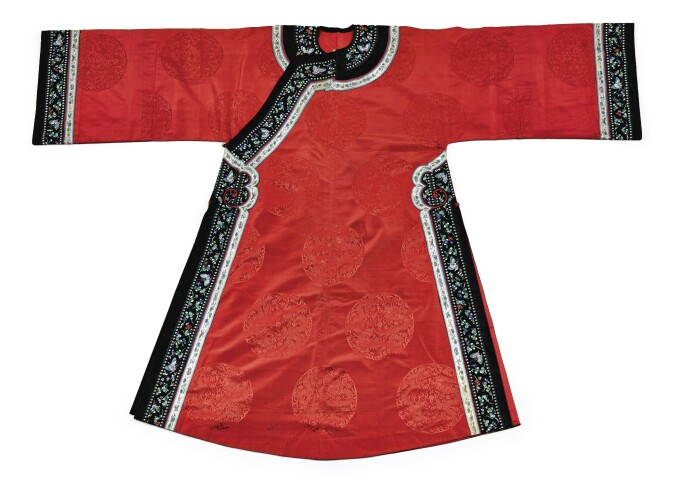 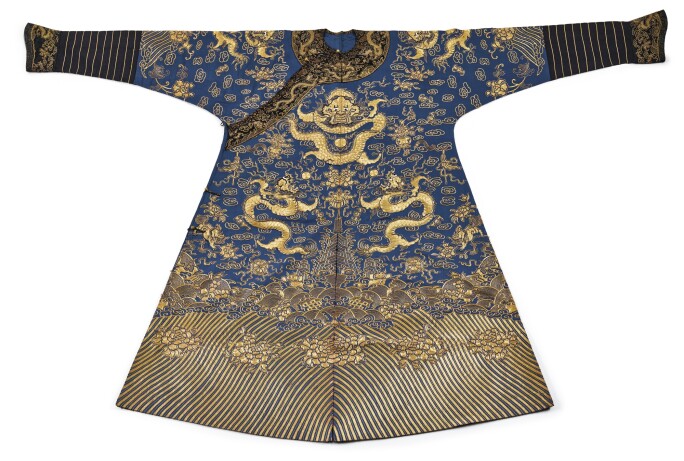 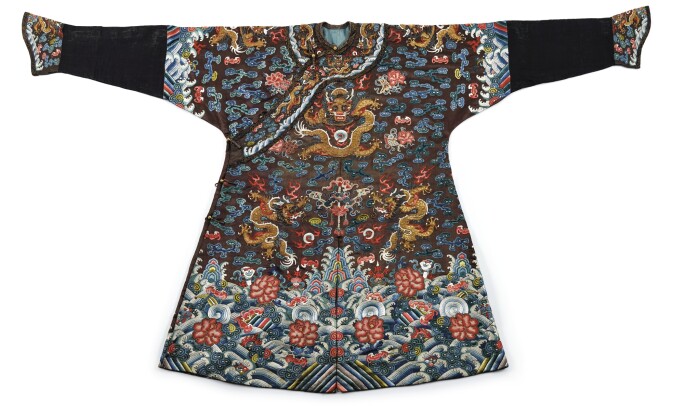 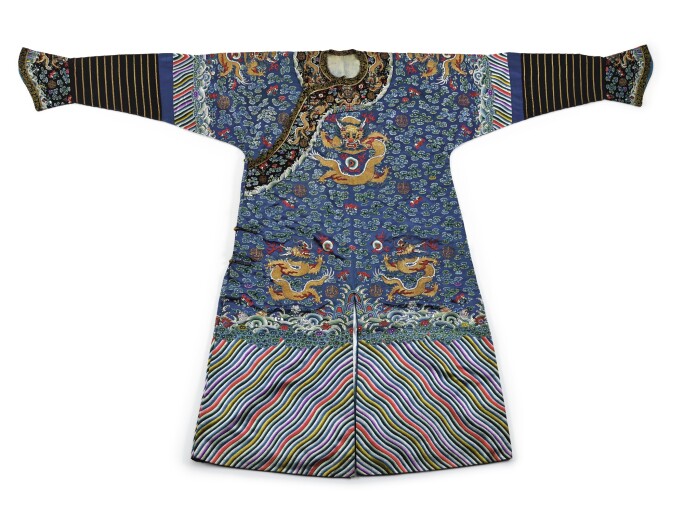 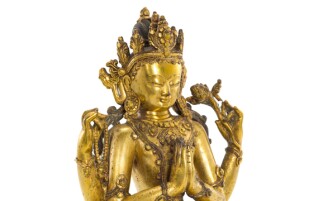