S otheby’s is thrilled to present two works by the American artist Angelbert Metoyer. Metoyer’s groundbreaking multidisciplinary practice draws from his rich ancestry and multifaceted identity to forge a richly diverse and experimental body of work that explores memory, social history, and race grounded through the lenses of science, philosophy, and religion. While rooted in drawing, painting, and sculpture, Metoyer’s work often incorporates sound, installation, and performance and employs such materials as coal, glass, debris, oil, silver, tar, stone, mirrors, and gold dust. Metoyer relishes in the physical and symbolic potency of his materials and in his capacity to fabricate hyper-sensorial, almost destabilizing environments that compel the viewer to confront and reconsider their held norms. Metoyer’s ancestral heritage underlies his identity and therefore his artistic practice: his lineage includes the famed 18th century African slave Marie-Terese Coincoin, who was born in the Cane River region of Louisiana and who had ten children with French-Moorish plantation owner Claude Thomas Pierre Metoyer after he purchased and freed her. Coincoin is today seen as an icon of American slavery in Louisiana, and she helped to shape Louisiana’s Creole culture today. Cognizant of the broader African diasporic tradition to which he is inextricably linked, Metoyer seeks to further his understanding of his own personal history and identity through his artistic practice, a quest that, for Metoyer, interweaves identity and mythology, the cosmic and the terrestrial, the past and the future.

Metoyer’s artistic career has been punctuated by his unyielding appetite and enthusiasm for an engagement with artistic communities across disciplines. Metoyer launched his career in 1994 when, while still in high school, he had his first solo exhibition by Rick Lowe’s Project Houses, a community arts center in Houston, Texas. Metoyer often incorporates sound, music, and performance art into his own practice, and in addition, has ongoing collaborations with a number of award-winning musicians, including hip-hop rapper and poet Saul Williams, singer-songwriter-producer Bilal, and hip-hop performer Mike Ladd. Metoyer's work is housed in the permanent collections of the US Department of State, the Houston Museum of Fine Art, The Charles, H. Wright Museum in Detroit, the African American Museum of Contemporary Art in Dallas, the ACE Collection, and the Museum of Fine Arts in Leipzig, Germany, as well as a number of prestigious private collections worldwide. Solo exhibitions of his work have been held at numerous venues, including The Contemporary Austin Texas, Co-Lab Projects, and the African American Museum of Contemporary Art, Dallas. Metoyer’s work has also been included in exhibitions organized by the Charles H. Wright Museum of African American History, Contemporary Arts Museum Houston (2012); Venice Biennale (2007-08); N'Namdi Center for Contemporary Art, Detroit (2012); UNESCO, Paris (2011); Museo de Arte Moderno de Trujillo, Peru (2010); Museum of Fine Arts, Houston (2008); National Civil Rights Museum, Memphis (2008); Museo de la Nación, Lima (2007); Arlington Museum of Art, Arlington, Texas (2007); and Shanghai Art Museum, Shanghai (2006).

...drawing—and by extension, writing—operates as Metoyer’s foundational medium, his mark-making a series of primordial gestures capturing his innermost ideas about the world and, evocative of [Carl] Jung, dream philosophies

Underlying Angelbert Metoyer’s diverse multidisciplinary practice are his drawings. Curator and writer Heather Pesanti writes of Metoyer’s oeuvre that within the spectrum of his practice, “drawing—and by extension, writing—operates as Metoyer’s foundational medium, his mark-making a series of primordial gestures capturing his innermost ideas about the world and, evocative of [Carl] Jung, dream philosophies” (Heather Pesanti, Collecting Black Studies, p. 26). Created in 2003 while Metoyer was living and working in New York City, Daughters of Thunder almost prophetically embodies Pesanti’s claim and reveals Metoyer’s supreme draftsmanship and uncanny ability to conjure the unconscious in his drawings. The present composition is grounded by a central figure -- a doubled woman, presumably the titular daughters of thunder, who, like twins duplicitous in nature, appear to have originated from a single source. The duality of her form echoes a number of dualities that are at the core of Metoyer’s conceptual practice: that of the conscious and unconscious; the outward and the inward; the visible and the invisible; the physical, corporeal world and the abstract, spiritual realm; mythology and reality.

Undeniably mesmerizing, she confronts the viewer with haunting intensity and startling intimacy. Standing tall and optimistically gazing upward, she meditatively contemplates her future grounded in her present state, and thus becomes an emblem of our own fraught relationship with time, memory, and space. Around the central figure, a dense, cosmic network of images, shapes, symbols, and text rendered with a prophetic urgency chart a fantastical dreamlike realm. When taken together, this seemingly frenzied dispersion of graphic mark-making collectively reveals a harmoniously cohesive composition, and one that is in fact the result of finely-honed technical precision. Indeed, upon closer investigation, each symbol and image – eyes, ladders, stars, and arrows – can be deciphered and collectively reveal Metoyer’s fascination with the symbolic potency and capacity of symbol, image, and word. His use of materials – incorporating into the composition gold and coffee – furthers these conceptual aims. Daughters of Thunder fuses image, word, and sound in a vibrant medley that pulses with graphic energy while remaining restrained and refined, resulting in an arresting elegance.

While Metoyer’s drawings underlie his practice, it is through his multimedia paintings that Metoyer most expressively challenges preexisting modes and reveals his virtuosic artistic ingenuity. Executed in 2012-2014, Ask God is an exceptional example of Metoyer’s M-Window series, a body of work begun in the early 2000s which stands amongst the most conceptually rigorous and visually captivating of his artistic practice. Metoyer creates his M-Windows by etching into or painting onto panes of glass and then layering the glass over sheets of refractive aluminum that have been ground with gold dust. Charcoal drawing, photographic impressions, and acrylic paint are also incorporated into this matrix, lending the final compositions mesmerizing depth and complexity. The M-Windows deal with alchemy, religion, ritual, memory, and science both conceptually and literally in the materials used in their very construction. Central to the conceptual genesis of the M-Windows is the phenomena of memory and consciousness – personal, collective, and ancestral – and a conception of memory as at once eternal, immortal, dynamic, and static. Also central to the M-Windows is Metoyer’s career-long interest in exploring the representation of race and understanding race as something that is at once both lived and corporeal and yet constructed and abstract.

Layered within the frame are images forged from the matter of industry: coal, glass, oil, tar, mirrors, mud, gold dust… elements that often represent destruction, yet eternity. The creation of the M-Windows is an order of various actions that create visions, almost a way of recalling archetypal memories, and these memories are the source of the forms that my hands conjure. It’s important to realize that memories are not ever truly our own, they are profound moments in a matrix of time.

Across the highly charged surface of Ask God, Metoyer forges a hybrid visual vernacular both mystical and methodical, contemporary and conventional, boldly navigating between inherently disparate modes to trace the origin, purpose, and design of the creative spirit. Metoyer’s impressions are both positive and negative, oscillating between additive mark-making and reductive etched incisions. Within the luminous and mystical realm of the present work, sheets of aluminum and gold-flaked glass function like geological strata, trapping within their layers etched and painted impressions which, suspended in a fractured continuum, divulge a sense of temporal progression and encourage a multidimensional conception of time and space. When one engages with the present work, the various accretive layers generate an almost holographic sense of movement within the composition, resulting in a dynamic, multidimensional landscape that appears to be in a state of perpetual flux. 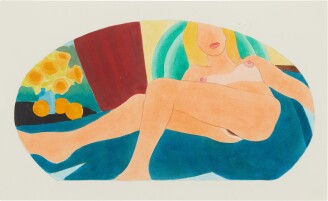