F or almost six decades Stuart Weitzman, the American entrepreneur and founder of the eponymous luxury shoe brand, has been designing footwear that has been worn by the likes of Beyoncé, Kate Middleton and Taylor Swift. While his creativity is outstanding, his eye for collecting must also be recognised. In 2014 Weitzman, who has been an avid stamp collector since childhood, acquired the British Guiana One-Cent Magenta, widely regarded as the rarest stamp in the world, for $9.48 million at a Sotheby’s auction in New York.

On 8 June, Sotheby’s New York will host a dedicated live auction titled Three Treasures – Collected by Stuart Weitzman, which will bring together a trio of iconic pieces from Weitzman’s collection. Alongside the British Guiana One-Cent Magenta, the only surviving stamp of its kind from 1856, will be the 24-Cent Inverted Jenny Plate Block, a block of four stamps that feature one of the most famous printing errors in philatelic history.

The single coin in the auction, the 1933 Double Eagle, is the only example that has been legally owned by an individual since President Franklin Roosevelt outlawed the production of gold coins. It is accompanied by the unique Certificate of Monetization signed by the director of the Mint, prepared by the US government to accompany this example. Its image of Liberty striding forward, designed by the great American sculptor Augustus Saint-Gaudens, breaking the plane of the coin, marked a revolutionary change in American coin design.

This remarkable sale offers potential buyers the chance to acquire three of the rarest items in the history of collecting.

1. The plate number “8493” is unique not only to the Inverted Jenny sheet but the entire initial print run, too. By being printed upside-down, the number appeared at the bottom of the sheet, and was saved from being trimmed off the top, as was the norm.

2. The aeroplanes flying upside down reflect the Curtiss Jenny biplane that flew the first airmail on the inaugural day of the service in 1918 and crashed and ended upside down in a field. The pilot was uninjured but delivery of the post was understandably delayed.

3. Saint-Gaudens found his muse for Liberty in the Winged Victory of Samothrace in the Louvre.

5. The British Guiana is a nearly unique collectible in that its owner is expected to add their mark to the back of the stamp. Weitzman’s stiletto-heel signature is undoubtedly the most unusual and imaginative of the six owners’ marks.

6. Despite its diminutive size, the compositor used no less than 58 separate typographic elements to create the completed stamp. Keeping it simple can be deceptively difficult. 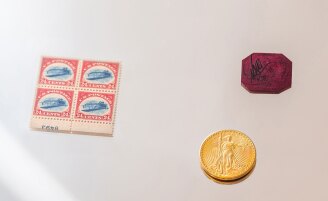