An Exciting Sale of Works from the Collection of Danny Katz

L ong before the advent of multi-category fairs such as Masterpiece, a handful of highly discerning collectors were acquiring in eclectic and diverse ways, juxtaposing unusual paintings and objects that highlighted lesser-known historical and aesthetic connections. Such inventive and insightful approaches to assembling artworks gave rise to some of the most exceptional collections we know of today, and indeed account for a number of record-breaking auction house sales in the past.

One such imaginatively-curated collection is that of Danny Katz, the well-known art and antique dealer who is now offering some of his eclectic stock through the May 20-27 online sale, Refining Taste: Works Selected by Danny Katz. Refined taste is the calling card of this master-curator whose unfailing eye has helped him accrue treasures in his Hill Street gallery that range from Modern British to Old Masters, ceramics and furniture. Ten of the 140 lots in the auction will be sold in aid of two charities helping those in need during the pandemic: The Trussell Trust which provides food banks and Refuge, which helps those suffering domestic abuse.

At 72 and wanting to change his business model, Katz returns to Sotheby's for a second time (following a successful sale in 2013), to de-accession a series of works in order to concentrate on fewer, but higher-value objects at the top end of the market. Those who know Danny are aware that he always buys with love for the object, not for commercial reasons. As an autodidact, Katz spent countless hours in the V&A learning about Persian carpets, Renaissance bronzes, incunabula, books, 19th-century drawings, the music of Bach - in short anything that inspired and uplifted, and turned him into an apprentice to beauty.

Nowadays a visitor to the Louvre Abu Dhabi for example, will understand the value of thoughtful curating with an understanding of history or narrative, the ability to establish connections in addition to aesthetics. Only then does our eye truly take in the significance of an artwork. "The estimates for some of these things are ridiculously low and hopefully they will go higher," says Danny, "But there are opportunities for people to buy beautiful Scandinavian art, 19th-century and Modern British art, Renaissance sculpture...at very reasonable prices."

The sale, which had been planned before the pandemic, has moved effortlessly online. "I don't think live sales are really necessary," says Danny as a seasoned auction house client. "I attend some live sales and I'm about the only bidder in the room." Admitting that parting with some of his objects was very hard, he says that this is by no means retirement for him. The insatiable dealer in him will continue to collect and bring the fruits of his inimitable taste to other discerning collectors who now have a rare opportunity to seize what is on offer. Miss this at your own peril! 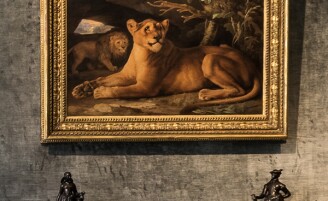