A Tale of Two Brothers: Alberto and Diego Giacometti

By Bartholomew Miller
Demonstrating Alberto and Diego Giacometti’s mastery in the decorative arts, Sotheby’s is delighted to offer five lots in the upcoming Impressionist & Modern Art Day Sale on 20 June.

B rother to the prodigious artist, Alberto Giacometti, Diego was a talented sculptor in his own right and subsequently became celebrated in his later years for his bronze furniture. So different were Diego and Alberto, that their brotherly relationship was complex.

They were both devoted to each other in varying ways; sharing studio spaces, Diego spent forty years of his life working as Alberto’s technical assistant, while Alberto protectively looked after his reserved younger brother and encouraged him to pursue his artistic endeavours. Born one year apart, Alberto and Diego were an interesting pair - artist and artisan, intellectual and everyman - yet the present works (lots 348–352) powerfully highlight how their relationship was far more than simply that of artist and assistant.

In a bizarre turn of events, it was an early, self-inflicted injury to Diego’s right hand that caused him to develop a high degree of dexterity in his fingers. Diego supposedly became so hypnotised by the blades of a threshing machine that he could not resist putting his hand inside. Understandably his family were horrified and this incident explains why Alberto felt the need to protect his brother. Under Alberto’s influence, Diego first trained as a caster and acquired such a high level of skill that when the Surrealist artist Joan Miró asked him to cast a plum tart it was executed without a flaw. 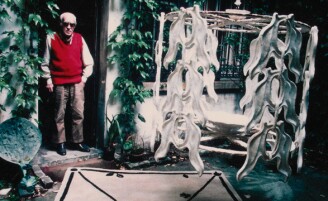 Following his introduction to the dealer and designer Jean-Michel Frank in 1929, Alberto Giacometti increasingly turned his artistic mind to design objects, including vases, chandeliers and lights. To him, these works were inextricably linked to his sculpture. Alberto and Frank became close friends and worked together until the war, which subjected the artist to Frank’s clients, the great writers and collectors of the time: Paul Éluard, Charles et Marie-Laure de Noailles, Elsa Schiaparelli and Nelson Rockefeller.

Diego Giacometti adopted Frank’s aesthetic of the anonymity and ‘modest luxury’. The objects produced were not meant to be functional, but to stand out as a visual statement in Frank’s minimalist interiors, reminiscent of a lost civilization. In 1936, the critic Waldemar George wrote that Giacometti’s objects look like "excavated objects. Giacometti has the antique under his skin" (Waldemar George, “Jean-Michel Frank,” in Art et décoration, March 1936, p. 91). Jean Leymarie further described him as an ‘artisan-poet’. 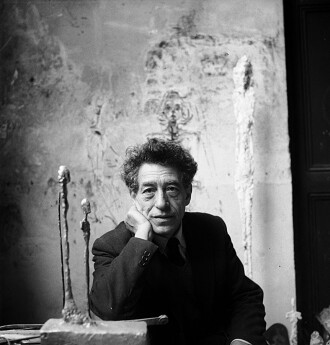 Diego’s explorations into furniture design began later than that of his brother, after the Second World War. At this time, Alberto was already famous and it was perhaps his elevated status that gave Diego the freedom to escape his brother’s shadow. His dedication to making bronze furniture quickly established a loyal clientele, with one of his most enthusiastic patrons being the fashion designer Hubert de Givenchy. As Table carcasse demonstrates, a characteristic aspect of Diego’s work was his interest in nature.

The design of the base structure of the table reflects the southerly Alpine valleys of his childhood in Switzerland. The thin bronze arrangement, methodical yet organic, echoes the twisted branches of a tree. His furniture pieces became sought after as they are evidently pieces created by an artist whose lifetime study of aesthetics had culminated in a slow embrace of his own creativity in the last quarter of his life. Alberto’s and Diego’s lamps are evocative of elegant kouros.

When Diego was eighty-years-old, Pablo Picasso commissioned him to design the furniture and lighting for the Musée national Picasso and their presence at the museum today is proof of the artist’s timeless appeal. Diego died in 1985 so did not live to see the first retrospective of his work in 1986 at the Musée des Arts Décoratifs, however the show was instrumental in cementing his legacy as the pre-eminent artist within the sphere of furniture and décor. Diego was a superb craftsman with a flair that created beautiful and pure furniture pieces and his creative force, as well as that of his brother Alberto, endure to this day.