A Rare Flowering of Day Lilies

By Regina Krahl
The porcelain stone and glaze used for Chenghua imperial porcelains are arguably the finest ever achieved at Jingdezhen. The sensual tactile pleasure of such a vessel is unmatched by those of any other period.

The imperial potters of the Chenghua period (1465-1487) were faced with a tall order to create porcelains that could stand the comparison to the outstanding quality of blue-and-white porcelains during the earlier reigns of Yongle (1403-1424) and Xuande (1426-1435). They managed to invent a new style following a different aesthetic, while also improving upon the physical quality of the porcelain.

The ‘palace bowl’ designates the most distinctive Chenghua blue-and-white porcelains, bowls made for less than a decade around the 1480s, probably used at court for food. They are remarkable for their understatement, their unsurpassed material quality and workmanship, unrivalled tactility, and perfectly attuned proportions. The seemingly simple yet highly sophisticated designs are executed in a captivating manner that is simultaneously sharply focused while also free and easy.

The present design is one of the rarest ‘palace bowl’ patterns and one of the most elegant. Only two other ‘palace bowls’ with the same motif appear to exist, now at the British Museum, London. On these three bowls, the flowers are distinctively rendered, with two of the four blooms on each side very realistically depicted with protruding stamens consisting of filaments topped by pollen-bearing anthers, and the foliage including curling, blade-line leaves. Related flowers appear also on another ‘palace bowl’ design, which is more common. There, the stamens are not protruding, but rendered as white knobs in the centre of the bloom, the petals have distinctive white ridges down the centre, and the stems are lacking the long, slender leaves.

The differences between the two patterns are probably intended to distinguish different types of flowers. Lilies and day lilies both have similar blooms but are otherwise different and belong to separate species. Lilies bear shorter leaves all along their stem, while day lilies have long, blade-like leaves sprouting from the ground around the flowering stem. While the two are difficult to distinguish with certainty in this stylized painted form, the elongated leaves on the present design suggest the day lily, and the related design the lily. The day lily (xuancao) is also known as ‘plant that dispels grief’ (wangyoucao) or ‘boy-favoring herb’ (yi’nancao), and is revered as an auspicious flower symbolizing many male offspring, according to Terese Tse Bartholomew in Hidden Meanings in Chinese Art.

The slight waxiness of the glaze … and the soft colour of the Chinese cobalt ... combine to make the palace bowls the most sensuous of all blue and white.

Chenghua palace bowls are unlike any earlier or later imperial designs. The layout of the decoration usually defies orderly, predictable arrangement – a daring concept for imperial works of art, where any individual touch was generally shunned and machine-like precision was required. In the present pattern, one of the elongated leaves on the inside grows an unexpected spur, which interrupts the regular rhythm, and on the outside, three of these leaves spring from below the stem, while the forth rises above it. It makes this vibrate, as if pervaded with some subtle motion.

The two companion pieces that exist both came from the collection of Wu Lai-hsi and were sold in our London rooms, 26 May 1937. No bowls of this design appear to be preserved in the Palace Museums in Beijing and Taipei, and no fragmentary examples appear to have been excavated from the waste heaps of the Ming imperial kilns in Zhushan, Jingdezhen. Of the related ‘lily’ design at least ten examples are known to be preserved, one of them in the National Palace Museum, Taipei.

Julian Thompson, who for years compiled and researched a catalogue raisonné of Chenghua imperial porcelains and published the present bowl in his catalogue of the Alan Chuang collection, wrote: “Since the first Chenghua blue and white bowls, in a variety of designs, were imported into Europe in the 1930s and designated ‘palace bowls’, their equally exceptional quality in the repertoire of imperial blue and white has drawn the attention it deserves. The slight waxiness of the glaze, with a subtle off-white tinge found at no other period, and the soft colour of the Chinese cobalt, so different from the brighter colour of the imported pigment, combine to make the palace bowls the most sensuous of all blue and white. … The finest, like the present example, are decorated with the same flower scroll both inside and outside the bowl in audaciously spacious designs completely lacking the horror vacui of their Yongle and Xuande predecessors.”

For a closer look or to read more details about the palace bowl, the full version of this article is available. 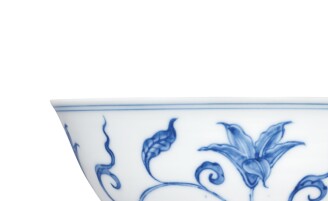