1. Yayoi Kusama’ s iconic polka dots are inspired by a hallucination she experienced while looking at a tablecloth as a child.

No conversation about the famed Japanese artist Yayoi Kusama (b. 1929) could avoid mention of her signature motif. The artist claims that she began painting these dots after a childhood psychiatric episode. “One day I was looking at the red flower patterns of the tablecloth on a table, and when I looked up I saw the same pattern covering the ceiling, the windows and the walls, and finally all over the room, my body and the universe,” she recalled “I felt as if I had begun to self-obliterate, to revolve in the infinity of endless time and the absoluteness of space.” 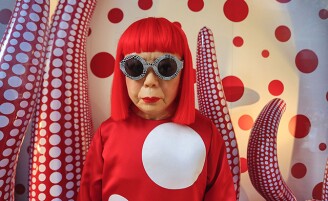 The radical contemporary artist trained in a strict academic environment, leaving home in 1948 to attend the Kyoto Municipal School of Arts and Crafts. There she studied in a rigid master-disciple structure, which Kusama, unsurprisingly, found dogmatic and depressing.

3. Before moving to New York later in 1957, her first stop in the US was Seattle.

Kusama's first venture outside of Japan brought her to the rainy Northwestern city of Seattle. An avid-letter writer Kusama had initiated a correspondence with the Seattle-based artist Kenneth Callahan, who invited her to visit. Arriving in 1957, Kusama had her first international exhibition in the city, gained some notoriety and even attained a green card before traveling on to New York later that year.

4. Georgia O’Keeffe was her friend and advisor.

The celebrated painter of flowers and animal skulls was an astute business woman in addition to being one of the most famous artists of the 20th century. The ever-keen Kusama began penning letters to O'Keeffe during the 1950s. Then in her 20s, Kusama asked for advice about how to succeed in the New York art world. O’Keeffe counseled Kusama, going so far as to encourage her own dealer to buy several of her works.

5. She broke out to international acclaim in 1966 when she was the first woman to represent Japan in the 33rd Venice Biennale.

It was there that she installed her now iconic Narcissus Garden, which was recently installed in New York's Fort Tilden at Rockaway Beach. Consisting of dozens upon dozens of silvered spheres, the work caused an uproar when Kusama offered to sell each sphere for $2.

6. During the 1960s, Kusama climbed the Brooklyn Bridge clad in a polka-dotted leotard in protest of war and the deleterious effects of capitalism.

7. Kusuma is both fascinated and repulsed by sex and considers herself asexual.

Her fear of sex began when her mother repeatedly sent her to spy on her serially philandering father. Her obsession with the male anatomy is manifest in works such as her famed Accumulation No. 1. (1962), a bulky white chair covered in stuffed phallus shapes.

8. She and Donald Judd were good friends and lived in the same building.

The two artists met in the late 1950s and in 1959, Judd positively reviewed Kusama’s inaugural New York solo show. A few years later they were living in the same building at 53 East 19th Street, separated by a floor. After Kusuma returned to Japan, they stayed in touch and Judd even came to visit her in 1978.

9. She had a decade long relationship with the reclusive artist Joseph Cornell, who called her on the phone several times a day.

Kusama is not one to divulge the details of her personal relationships but she shared an emotionally intimate, though supposedly platonic, relationship with the eccentric artist Joseph Cornell, father of the assemblage. They met in the mid 1960s, when Kusama was in her thirties, and he twenty-six years her senior. Cornell, who lived with his mother in Flushing, Queens, called her several times a day and gifted her personalized collages, occasionally for the then financially strapped Kusama to sell.

When she returned to Japan in 1973, Kusama suffered a mental breakdown. She checked herself in 1977 into Seiwa Hospital in Shinjuku, Tokyo, where she has been living ever since. Her art studio is within walking distance.

11. The prolific artist has designed everything from handbags to lip gloss.

During the 1960s she founded the Kusama Fashion Company Ltd. where she created polka-dotted attired and more. In 2012 she memorably collaborated with Marc Jacobs, then the creative director of Louis Vuitton, on the “LOUIS VUITTON × YAYOI KUSAMA Collection,” and with Lacome for a lip gloss in 2013.

12. She calls her webs of polka dots “infinity nets” and sees them both as a conduit to the infinite and a form of obliteration.

Of her practice she once remarked, "All of us live in the unfathomable mystery and infinitude of the universe. Pursuing 'philosophy of the universe' through art under such circumstances has led me to what I call 'stereotypical repetition.'"

She has published eight novels and several books of poetry in her lifetime. Her autobiographically inspired novel Manhattan Suicide Addict was based on her years working as an artist in New York City, while her 1983 novel The Hustlers Grotto of Christopher Street won a new writers award.

14. No one art movement defines her oeuvre.

She’s been associated with Abstract Expressionism, for her emphasis on the artist’s gesture, with Pop for her bright colors and repetition of imagery, and even Art Brut. The artist herself identifies with no one movement and has chosen instead to move fluidly between them, calling her style “Kusama art.”

15. She considered Andy Warhol a good friend, but also accused him of plagiarism.

The tension sparked over wallpaper, oddly enough. In 1963, Kusama plastered a rowboat with phalluses and wallpapered the room with repeated identical photocopies of the image in 1963. Three years later, Warhol made a wallpaper of the repeated image of a silkscreened cow. Despite the accusation, the two artists remained on good terms.

16. After a period of relative obscurity, Kusama returned to fame during the 1993 Venice Biennale.

After Kusama returning to Japan, Kusama was largely forgotten about by the art world, before re-emerging with gusto at the Venice Biennale, thirty years after her first presentation there.

17. Kusama tried her hand as an art dealer.

The first works Kusama ever sold were drawings Joseph Cornell gifted to the impoverished young artist. When she first returned to Japan in 1973 Kusama gave it a go as an art dealer, but after several years the business folded. It was after the demise of her dealing career that she checked herself into Seiwa Hospital for the Mentally Ill.

Though gay marriage only became legalized in New York State in 2011, Kusama held a happening called Homosexual Marriage in 1968. Kusama performed the ceremony in downtown at Manhattan at 33 Walker Street at her so-called Church of Self-Obliteration.

Her dream-psychedelic 1967 film Self-Obliteration was well received. She has also collaborated with music legend Peter Gabriel, whose 1994 music video for Lovetown is based on her artistic aesthetic.

20. One of her famed pumpkins was shattered by a selfie-gone-awry just days into her 2017 Infinity Rooms exhibition.

Soon after her fifty-year retrospective opened at Washington, DC’s Hirshhorn Museum and Sculpture Garden, a viewer lost his footing while trying get a good angle inside her infinity room All the Eternal Love I Have for the Pumpkins (2016), resulting in the un-eternal demise of one of the artist's iconic pumpkins and a ban on photos inside of the room.

21. Yayoi Kusama is considered the most successful living female artist.

With hours-long lines to enter her museum and gallery shows, there is certainly no doubt that Kusama is a crowd favorite. This has translated to commercial success as well — Kusama boasts the highest auction prices of any living woman artist. The highest price for any woman artist, living or dead, belongs to her mentor Georgia O'Keeffe.