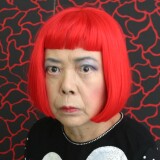 Born 1929.
Interested in selling a work by Yayoi Kusama?
Get an Estimate

Works by Yayoi Kusama at Sotheby's

Japanese artist Yayoi Kusama is known for her installations, sculptures and paintings and numbers among the most influential living contemporary artists. Born in Nagano in 1929, Kusama began creating art and writing poetry at a young age. Soon after relocating to Seattle in 1957, she headed to New York City where she became friends with the artists Donald Judd and Joseph Cornell. It was during these years that she originated her Infinity Net paintings, intricate webs of paint comprising repetitive brushstrokes.

In the early 1960s Kusama rose to prominence through a series of Happenings and Pop performances, but, suffering from exhaustion, she returned to Japan at the beginning of the 1970s, retreating from the art world until the 1993 Venice Biennale. In the Japanese Pavilion, she installed her Mirror Room (Pumpkin), a mirrored room filled with her signature dotted pumpkin sculptures.

Kusama has continued to develop an expansive and prolific practice, cultivating her specific visual lexicon that is at once whimsical, erotic and participatory. In 2017 the Hirshhorn Museum, Washington, DC, organized the highly acclaimed Yayoi Kusama: Infinity Mirrors, an exhibition featuring six of her iconic Infinity Rooms, which opened to overwhelming public success. The Broad in Los Angeles has two Infinity Rooms in its collection; elsewhere, Kusama’s works may be found in the Museum of Modern Art, New York; Los Angeles County Museum of Art, Los Angeles; and the National Museum of Modern Art, Tokyo. For those owning Kusama, the market is decidedly strong. According to Sotheby’s Mei Moses, the average compound annual return for Yayoi Kusama resold at auction between 2003 and 2017 was 26.2%. 92.3% of 65 such works increased in value.

Museums with Works by Yayoi Kusama

Artist Image: Credit: jeremy sutton-hibbert / Alamy Stock Photo
Please note that prior performance of the indexes and realized returns contained herein does not guarantee future results. In addition, there is no guarantee that random collections of individual works of art or stocks will yield index returns. We are not financial advisors and we are not in the business of recommending art as an investment. We also have no comparative advantage in forecasting the future direction of the art market. Investment decisions should be based on the risk return tolerance and time horizon of the investor with, if desired, the support of a licensed financial advisor. This information is provided "as is" and with no representations or warranties either express or implied of accuracy, merchantability, fitness for a particular purpose or of any other nature are made with respect to this information or to any expressed views presented in this information.