1. Alberto Giacometti was born in Switzerland to an artistic family in 1901. His father was post-Impressionist painter Giovanni Giacometti; his father’s second cousin was Symbolist painter Augusto Giacometti; and his godfather Fauvist Cuno Amiet. In addition to his three younger siblings, two of Alberto’s cousins were raised in his family home after they became orphaned. His brothers Diego and Bruno also worked as artists.

2. Giacometti was famously extremely self-critical, which motivated his prolific and wide-ranging career: “The more you fail, the more you succeed.”

3. The 100 Swiss franc note features a portrait of Giacometti on one side, and a reproduction of his 1961 sculpture, L’Homme Qui Marche, on the other.

4. Giacometti began working in various media at a young age. He sent pencil drawings to his godfather beginning in 1911, and began oil painting in his father’s studio in 1913. By 1914 he began modeling the heads of his brothers in plasticine. He moved to Paris at age 21 to study at the Académie de la Grande Chaumière, under Antoine Bourdelle, who had worked and taught with Auguste Rodin.

"I began to work from memory…but wanting to create from memory what I had seen, to my terror the sculptures became smaller and smaller, yet their dimensions revolted me, and tirelessly I began again, only to end several months later at the same point. Often they became so tiny that with one touch of my knife they disappeared into dust."

5. Until his death in 1966, Giacometti occupied the small, shabby Paris studio he bought in 1926, despite the commercial, critical, and financial success he experienced during much of his life. His American biographer James Lord referred to the studio as a “dump” and a tree branch famously grew through one of its walls.

6. From the late 1920s until 1935, Giacometti’s work reflected the ideals of the Surrealists and appeared in exhibitions alongside the work of Joan Miró, Hans Arp and Salvador Dalì. He quickly became a leading Surrealist sculptor.

7. No More Play, Giacometti’s table-top sculpture from 1932 now in the National Gallery of Art, Washington DC, calls upon the main themes of the Surrealist project: mortality, sexuality and humor. Gendered game pieces appear on a gameboard-like pedestal, with no instructions or timeline for play. Tiny, skeletal objects appear in coffin-like spaces, and invite the viewer to cross the inviolable space between object and audience.

8. Giacometti experimented with cage-like structures in many of his Surrealist sculptures, evoking the mystery and ambiguity of the world of dreams. He described this period of enigmatic work: “For six whole months, hour after hour passed in the company of a woman who, concentrating all life in herself, made every moment something marvelous for me. We used to construct a fantastic palace in the night (days and night were the same color as if everything had happened just before dawn; throughout this time I never saw the sun), a very fragile palace of matchsticks: at the slightest false move a whole part of the minuscule construction would collapse: we would always begin it again.”

9. Giacometti’s The Invisible Object remained an incomplete sculpture for years, until, during a stroll through the Paris Flea market with André Breton, Giacometti noticed a gas mask, which inspired him to complete the figure’s head.

10. The artist broke with the Surrealists in 1934, after concluding that his abstract objects had separated him too distantly from reality, and began studying the human figure in real space. In response to André Breton claiming “everyone knows what a head looks like,” Giacometti explained, “Not me.”

11. On 14 February 1935, Breton held a Surrealist meeting in which he charged Giacometti with disloyalty to Surrealism. Giacometti officially ended his ties to Parisian Surrealism by abruptly interrupting the interrogation, and storming out of the meeting. His break was regarded as treason by the Surrealists, though he remained in contact with friends Louis Aragon, Max Ernst and other members of the group.

12. Giacometti was commissioned for the monument for the grave of Gerda Taro, German Jewish anti-fascist war photographer, who died while photographing wounded soldiers at the Battle of Brunete in the Spanish Civil War. In 1937, hers was the first known death of a woman photojournalist who died while covering war. Giacometti’s monument appears at her grave in Père Lachaise Cemetery in Paris. 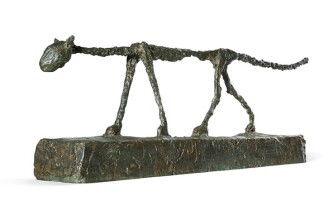 13. On 18 October 1938, a traffic accident on the Place des Pyramides left him hospitalized for a week. While there, he modeled The Chariot on the cart wheeled around with clinking medicine bottles. His doctor sent him home with instructions for caring for his broken leg, which Giacometti ignored, leaving him with a limp for the rest of his life.

14. He described his working process for his slender, fragile figural sculptures: “I began to work from memory…but wanting to create from memory what I had seen, to my terror the sculptures became smaller and smaller, yet their dimensions revolted me, and tirelessly I began again, only to end several months later at the same point. Often they became so tiny that with one touch of my knife they disappeared into dust.” His frighteningly slender, anonymous figures stand pained and ghostly, with the bumps and gouges formed by his hand, visible on the surface.

15. Although Giacometti rejected existentialist readings of his post-war work, philosopher Jean-Paul Sartre, Giacometti’s friend, considered the artist’s figurative sculptures as the personification of existentialism in their isolation, fragility and distress.

16. Unfit for service following his vehicular accident, Giacometti spent most of World War II in Geneva during the occupation of France, and did not return to his Paris studio until September of 1945.

17. Until the end of the war, his delicate, thin figural sculptures remained under 2.5 inches high; however, beginning in 1945, his humanoid objects expanded into tall, larger-than-life, often frightening figures, that towered over six-feet high: “to my surprise, they achieved a likeness only when tall and slender.”

18. Giacometti visited Henri Matisse on his deathbed in Nice in 1954, where he drew many portraits of the dying artist that would serve as the model for a medal commissioned by the French mint.

19. The artist was commissioned for major projects in the United States and Europe throughout the 1950s and 60s. By even the early 1950s, he was included in most exhibitions of twentieth century western art in Paris, Zurich, Basel, London, Chicago, and New York. Despite failing health and news that a stomach ulcer had developed into a tumor, he attended the opening of his retrospective at the Kunsthaus Zürich in 1962, which featured 300 works from Giacometti’s fifty-year long career.

20. Giacometti designed and produced a tree for a 1961 Parisian production of Waiting for Godot at the Théàtre de l’Odéon, at the request of the playwright.

21. In the last weeks of his life, Giacometti vacillated between losing his will to live or work after hearing an undesirable prognosis, and renewed hope and a zealous undertaking of working from his hospital room. He died of heart complications from years of suffering from bronchitis and chain-smoking. His funeral in his hometown of Borgonovo was attended by family, residents of nearby towns, members of Swiss authorities and the French government, and countless museum directors, art dealers and artists from around the world. 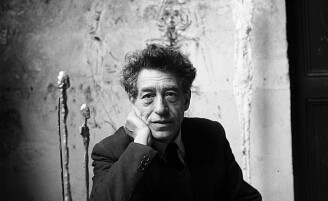