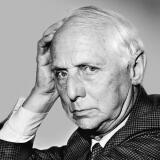 Born 1891. Died 1976.
Interested in selling a work by Max Ernst?
Request an Estimate

Works by Max Ernst at Sotheby's

Born to a middle-class Catholic family near Cologne, Germany, Max Ernst (1891–1976) was prominent in both the Dada and the Surrealist movements, making his mark as a painter, sculptor and maker of enigmatic objects. Known for his interest in the unconscious, social commentary and experimentations with subjects and techniques, he was a witness to the evolution of the 20th century.

Traumatized by his service in the German Army during World War I, Ernst made a name for himself in Paris in the early 1920s through an exhibition of his early collages along with with the powerful imagery and impressive crafstmanship of paintings such as The Elephant Celebes (1921) and Oedipus Rex (1922). After settling in the Frech capital in 1922, Ernst invented a graphic art technique called frottage (pencil rubbings of objects as sources of images), which was soon followed by grattage (in which paint is scraped against canvas), which he used in Forest and Dove (1927). He began sculpting in the mid-1930s while producing such ominous paintings as The Petrified City in 1933, the year the Nazis took power, and Barbarians Marching to the West (1935).

In 1938, American heiress and art patron Peggy Guggenheim acquired a number of his works, and later helped Ernst flee to the U.S. after World War II broke out, eventually marrying him in 1942. By 1948, Ernst had remarried to artist Dorothea Tanning, and settled with her in Sedona, Arizona, until 1953, during which time he compiled his book, Beyond Painting and completed his sculptural masterpiece, Capricorn. Ernst was awarded the Grand Prize for painting at the 1954 Venice BIennale.

Museums with Works by Max Ernst

Artist Image: Credit: dpa picture alliance / Alamy Stock Photo
Please note that prior performance of the indexes and realized returns contained herein does not guarantee future results. In addition, there is no guarantee that random collections of individual works of art or stocks will yield index returns. We are not financial advisors and we are not in the business of recommending art as an investment. We also have no comparative advantage in forecasting the future direction of the art market. Investment decisions should be based on the risk return tolerance and time horizon of the investor with, if desired, the support of a licensed financial advisor. This information is provided "as is" and with no representations or warranties either express or implied of accuracy, merchantability, fitness for a particular purpose or of any other nature are made with respect to this information or to any expressed views presented in this information.