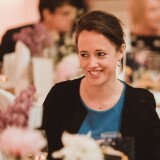 Frances Asquith began her career at Sotheby’s in 2007 as a researcher for the Rostropovich-Vishnevskaya collection. She became Head of Russian Pictures in London in 2013, transferred to New York in 2015 and joined the Impressionist and Modern Art department in 2018.

Over the past ten years Frances has worked with a wide range of collectors and institutions across the United States, Europe and the former Soviet Union, travelling regularly to Moscow and Kiev. During her time in the Russian Art department, she and her team set the benchmark on expertise in a field that ranges from Imperial portraiture and 19th-century landscapes to avant-garde abstraction and early Soviet works on paper, establishing Sotheby’s reputation as the leading auction house for Russian art.

Frances graduated with first class honors from Oxford University where she studied Philosophy and Modern Languages. She grew up in the West of England and Ukraine, speaks fluent Russian and has been an auctioneer for Sotheby’s since 2013.