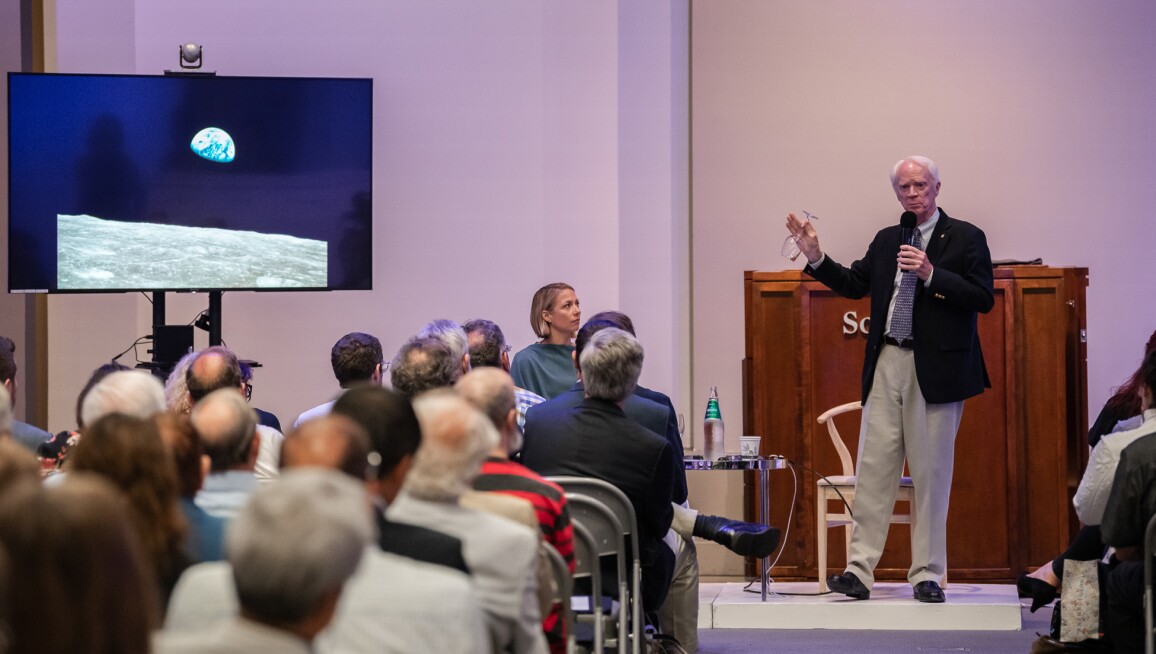 A s the world anticipates the 50th anniversary of the moon landing on 20 July, Sotheby’s was lucky enough to have Apollo 9 lunar module pilot Russell “Rusty” Schweickart lead a standing-room-only talk in our galleries on 17 July. Schweickart is one of several astronauts to have directly consigned property for Sotheby's Space Exploration auction, whose exhibition is presented by Montblanc. Despite having laryngitis and needing to preserve his voice for several speaking engagements at Cape Canaveral later this week, Schweickart generously and passionately shared his memories and learnings from his fascinating career to a rapt audience, alongside Cassandra Hatton, Sotheby’s VP & Senior Specialist, Head of Sale. Schweickart covered everything from the Big Bang to his philosophy of “cosmic birth,” where the universe and Earth are analogous to mother and child. Guests were then treated to a special screening of highlights of the Apollo 11 moon landing tapes, on offer in Sotheby’s Space Exploration, with commentary by Schweickart and Hatton – the result of which made the viewing experience all the more engrossing even for those who watched the original airing in 1969. 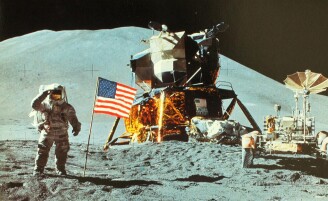 Space Exploration
One Small Step, One Rare Recording: See the Moon Landing Like Never Before

The audience relived this “giant leap for mankind” exactly as Schweickart had, listening to President Nixon make the first telephone call from another planet, watching the iconic astronaut “kangaroo hop” and witnessing the American flag be secured to the lunar surface. “My mind is being blown, and my kids are here, and I don’t know if they know that their minds are being blown right now too,” one guest said, perfectly expressing the goosebumps-inducing feeling the audience collectively shared. “I challenge you to think of any other moment in history in which the whole world was united for a positive reaction,” said Hatton. After the viewing, guests headed to a reception to see lots from the Space Exploration sale, as well as other auctions, including American, Contemporary, Impressionist and Modern, prints, watches, sneakers and Treasures from Chatsworth. Guests could also send space-themed postcards with custom messages handwritten by a calligrapher using Montblanc’s new StarWalker writing instrument. View images from the celebratory evening and below discover ten takeaways from Rusty Schweickart’s moon landing commentary. –Stephanie Sporn

1. The story behind the famous photos of Rusty in space actually resulted from a camera jam. As the camera was being fixed, Rusty’s ability to control himself was what was documented. As he told the audience, he highly recommends being “unemployed in space.”

2. Today Rusty’s mission is to prevent an asteroid impact on Earth, which is inevitable due to “the great clockwork of the universe.” Although it seems impossible to believe, Schweickart insists it can be prevented by redesigning the solar system for Earth’s survival.

3. One of the theories surrounding the moon’s surface was that it could be fluffy like powdered snow, and an astronaut could sink through it, hence why upon watching Neil Armstrong’s first steps onto the moon, he can be seen gently touching the surface with his toe before fully stepping off.

4. While thankfully the lunar surface was solid, the moon dust was quite angular and invasive due to its lack of water. Today it is still a significant engineering challenge to deal with the dust and prevent it from sticking.

5. An easy way to distinguish between photographs of Neil Armstrong and Buzz Aldrin on the moon is that Armstrong had a Hasselblad camera attached to his chest. Therefore it is less common to see photos of Armstrong, making the tapes’ footage of both Aldrin and him particularly rare. 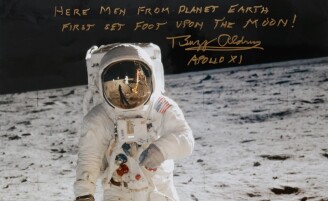 6. According to Rusty, it is quite fun to fall down on the moon because it is easier to quickly propel oneself up than it is on earth.

7. As many know, Apollo 9 was Rusty’s first and only flight because he got space sick on the third day. He became the motion sickness guinea pig for future astronauts, as he had to learn the hard way that “barfing is barfing but not quite in zero G!”

8. When asked at what point the astronauts were most fearful, Rusty responded that probably the ascension from the moon was “the tightest point.” But ultimately, “you are too busy to be fearful.”

9. Rusty watched the moon landing at Buzz Aldrin’s home. He shared that typically the astronauts not flying went to the other astronauts’ homes to be there for one another and their families.

10. When asked about failure versus progress as it relates to climate change and the larger universe, Schweickart provided inspiring words of comfort and perspective. “DNA is not perfect. It fails. It mutates, and because of mutations we end up improving. Life develops because of failure,” he stated. “Everybody will be a little better tonight because of what we said.”